Oliver Samwer: The most aggressive guy on the Internet? 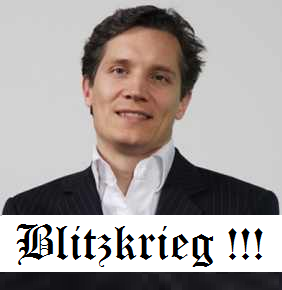 TechCrunch Europe has just leaked an internal e-mail from Oliver Samwer to his “colleagues” at a Rocket Internet backed startup. Oliver is one of Europes most successful but also most controversial entrepreneurs. Rumors say, that his startup incubator Rocket Internet will soon announce a BILLION Dollar capital injection from some well known international investment firms (like DST and others). In relation to his plans to establish international and market leading e-commerce companies he told his team within the mentioned e-mail: “…the time for the blitzkrieg must be chosen wisely, so each country tells me with blood when it is time. i am ready – anytime!“

Well, I heard of Oliver Samwer’s aggressive language before – but due to this leaked memo his style of communication is now public – very public! Here are some more examples of the e-mail:

We are coming late, so we need to be the most aggressive, so aggressive that every competitor is surprised because he cannot imagine that we are SOO aggressive. to give you an example in brazil in groupon my competitor did 3m a month and had 80 sales people. i assumed in 4 months he would go to 300 salespeople and 6m so i told the team to have 500 salespeople in 4 months and 10m monthly revenues. we won. yes, there was some collateral damaage (it could have been done cheaper wiht more time), but i won and this it was matters so i could raise money and optimise all the missing parts.”

At the End of his e-mail Oliver Samwer wrote: “I am the most aggressive guy on internet on the planet. I will die to win and i expect the same from you!”

Check out the TechCrunch article to read the full memo…