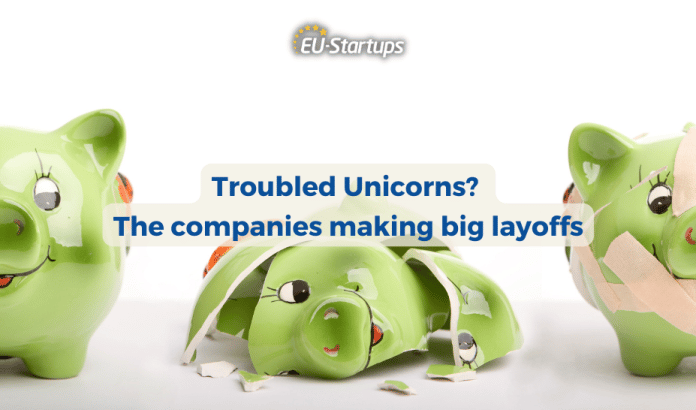 2023 is starting out to be a tough year for the tech industry with layoffs, valuation cuts and a funding slowdown continuing from last year. And the bloodbath of layoffs is not slowing down with tech giants like Amazon, Microsoft, Salesforce, and Alphabet recently announcing massive layoffs affecting their global workforces, including here in Europe. On top of the chopping block are Amazon’s 18,000 and Microsoft’s 10,000 job cuts announced in recent weeks.

On Tuesday, January 17th, UK unicorn Britishvolt, the battery startup that was supposed to propel Britain’s ambitions to develop low-carbon businesses and boost its auto industry with a domestic source of electric batteries, filed for insolvency.  This latest troubling news is a sombre addition to European unicorns already hit last year by the global economic downturn with many responding with layoffs to cut costs and preserve cash.

So, how are the rest of the European unicorns faring in terms of layoffs? Here, we take a look at 10 ‘troubled’ unicorns, who have recently announced job cuts, and might need to rethink how they go about business.

Blockchain.com: Global crypto wallet provider, Blockchain.com announced on January 12 that it is cutting 28% (about 110 employees) of its workforce. The cryptocurrency brokerage UK unicorn already cut 150 jobs in July. According to a company representative, this latest job cut is to better balance product offerings with demand, by reducing operating costs and headcount to rightsize the company.

Paddle: CEO Chris Owens announced on January 12, via a LinkedIn post, that it is cutting 8% of its workforce, citing the need for diligently controlling and reducing costs in the midst of a downturn as the reason for the job cuts. This London-based fintech unicorn, which offers a complete payment infrastructure for SaaS companies, was forthright in admitting that they made two crucial mistakes that led to the decision – assuming that the Covid-era growth was a fundamental shift that could be sustained and allowing operating costs to increase faster than they were growing their revenue. We chatted to Chris back in 2021 to learn more about the startup and their approach to growth.

Beamery: This Talent Lifecycle Management platform that helps companies build a more agile, future-proof workforce, announced last January 11 that it is cutting about 12% of its staff. The reasons cited, shared via email to all employees, include inflation and energy crises, high-interest rates and “sparser startup funding”. Beamery acquired unicorn status just recently, with a €47 million raise in a Series D round last December. The startup was also a standout addition to Europe’s unicorn club in 2022 thanks to its impressive growth rate and ability to attract global brands like BBC and Johnson & Johnson.

BackMarket: The French unicorn marketplace for refurbished gadgets, already announced in November that it was cutting 13% of its workforce across all teams. This translates to 67 people in France, on a voluntary basis first, and 26 in other countries. This came into effect beginning of January. The layoffs come only a year after a funding round of €450 million at a valuation of $5.1 billion that earned this unicorn the most valuable French startup label. BackMarket in its statement to the French press assured that the refurbished market is in very good shape and that the job cuts are a precautionary measure taken on by the founders.

MessageBird: The Dutch omnichannel communications platform announced last November, via a blogpost and email by its CEO Robert Vis that it was reducing the size of its team overall by 31%. Vis stated that the layoffs are part of more drastic measures for the health of the business, and, to continue to support and prepare their customers and stakeholders for the global recession that is to come.

Infarm: The Berlin-based vertical farming unicorn, announced last November that it is laying off more than 50% of its workforce affecting about 500 employees. The announcement was made via an email to its employees which stated that challenging market conditions, particularly escalating energy prices and tough financial markets, necessitated a strategy shift towards focusing on growing centres and reduction of production sites, as reasons for the significant staff reduction. It comes just a couple of years after a €144 million raise during the pandemic. We chatted with co-founder Osnat Michaeli in 2020.

Klarna: The Swedish BNPL powerhouse already started laying off 10% of its around 7,000-strong workforce in May of last year. In a pre-recorded video message, Klarna CEO Sebastian Siemiatkowski, stated “a tragic and unnecessary war in Ukraine, a shift in consumer sentiment, a steep increase in inflation, a highly volatile stock market and a likely recession” as drivers behind the cuts. In September, Klarna announced additional job cuts affecting fewer than 100 of its employees worldwide, citing adjustments to organizational structure as the reason. Klarna’s layoffs were an early shock to the European startup ecosystem, after it had spent prior years snapping up competitors and expanding globally – after a €547 million raise in 2020.

Kry: Another Swedish giant, providing digital healthcare allowing patients to see a doctor, nurse, or psychologist through video consultations within minutes, also announced it was laying off 10% of its workforce in May of last year. Kry’s co-founder and chief executive officer Johannes Schildt said that the decision was taken in response to market dynamics and proving to investors, partners, and patients their commitment to being conservative with capital. Another 10% cut was announced in October in addition to a decision to pull out of Germany.

Gorillas: The German on-demand grocery delivery provider, announced job cuts of around 300 in May last year as part of its shift from “hypergrowth” (founded in 2020 and hailed as the fastest unicorn fuelled by the pandemic) to a “path of profitability”. But in December last year, Gorillas was acquired by a pioneering rival in the ultrafast grocery delivery market, Getir (based in Turkey, founded in 2015), in a move to consolidate the instant grocery delivery space. This was one of the biggest acquisition deals of 2022. The transaction was reportedly valued at $1.2 billion  and job cuts are expected because of the considerable overlap in the locations where these two operate like their network of small urban warehouses or “dark stores” in cities such as London, Paris, Amsterdam and Berlin.

Hopin: The London-based event management platform was founded in 2019 and cemented its unicorn status with a $7.75 billion valuation after its Series D €380 million raise in August 2021. The company announced last November its third round of layoffs, letting a further 17% of staff go. Hopin founder Johnny Boufarhat stated that the layoffs were part of the decision to “scale down some parts of the business, become cash flow positive, and maintain our strong balance sheet” as well as the transition of Hopin from a one-product company into a multiproduct suite. Hopin is launching a new product Session, a webinar and meetings product designed to be “fun, lightweight, and interactive” and StreamYard On-Air for creators to live stream professional video to their own websites.

Share
Facebook
Twitter
WhatsApp
Linkedin
Previous article
Rob Cassedy, CEO of Wallapop, will speak at this year’s EU-Startups Summit on April 20-21 in Barcelona!
Next article
Paris-based Welcome to the Jungle swings into its Series C round with €50 million to boost employer branding

10 fast-growing German startups to watch in 2022