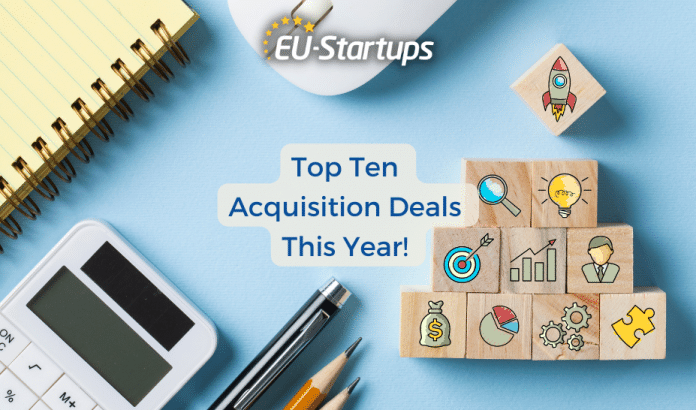 As the year wraps up to a close, we’re reflecting on what’s gone on in Europe’s startup ecosystem. It’s been a pretty interesting year to say the least, and we’ve been at the front lines of bringing you all the recent and more important updates as they come.

From shocking exits and acquisition deals and bumper-funding rounds to lay-offs and market expansions, 2022 has brought a little bit of everything to Europe’s startup ecosystem, and it’s been quite the ride to be a part of.

In fact, this year has been regarded as one of the biggest when it comes to acquisition deals. According to Pitchbook, in Europe, VC-backed companies have made well over 170 startup acquisitions over the course of the year – note that most acquisition deals tend to come from bigger corporates, often from the States, snapping up European startups. These deals totalled more than €1 billion, surpassing levels seen in 2021. It’s not surprising, really. Acquisitions have been seen as a better solution, or even as a last resort, for smaller startups struggling to raise funding and facing valuation cuts. At the same time, more mature payers have seen it as a consolidative way to expand their presence, create new revenue streams and access new tech and talent.

PS: We will soon be sharing a report of the M&A deals from across Europe, exclusively for our Club Members! Make sure you don’t miss it by subscribing here today.

Here, we take a look at the biggest acquisition deals from across Europe in 2022:

Dublin-based aircraft leasing company Goshawk, founded in 2013, was acquired by the Irish company SMBC Aviation Capital (part of Sumitomo Mitsui Banking Corporation) for €6.3 billion in May 2022. Goshawk provides top-end aircraft and was managing a fleet of 222 aircraft on lease to 62 airlines in 33 countries.

London-based global communications network builder OneWeb, founded in 2012, was acquired by the French corporation Eutelsat in a transaction that was valued at around €3.25 billion in July 2022. The telecoms company leverages a global constellation of satellites to deliver high-speed, low-latency internet  – improving access for growing economies and democratising it on a global level.

Stockholm-based logistics-tech startup Budbee, founded in 2013, was acquired by the Swedish Instabox in a transaction that was valued €1.6 billion in September 2022. Budbee’s logistics network reaches more than 35 million people in Sweden, Finland, Denmark, Belgium, and the Netherlands. With the transaction, the startups created a new holding – Instabee – and will continue to push the boundaries of this space by sharing their tech and learning. Read more about it here.

Dublin-based property investment company Hibernia REIT, founded in 2013, was acquired by the Canadian entity Brookfield Asset Management for €1.13 billion in May 2022. Hibernia is involved with acquiring and holding investments in Irish property – a market that is ballooning right now – and operates to maximise shareholder returns. This exit reflects the growing internationalisation of the property market in the Irish capital.

Berlin-based delivery startup Gorillas, founded in 2020, was acquired by the Turkish Getir in a transaction that was valued €1.13 billion in December 2022. The Getir Gorillas saga was a talking piece for months and in the end, the deal gave the combined group a valuation of $10 billion – a fall in valuations. The Gorillas backers were also left with little or no ROI and job cuts are still expected to be felt. Getir is now one of the titans fo the ultra-fast grocery delivery space, but we’ll be watching to see what’s to come next.

UK-based oil and gas exploration, development, and production provider Siccar Point Energy, founded in 2014, was acquired by the British Ithaca Energy for €1 billion in April 2022. Siccar focused on the production of gas and oil in the UK and this deal bolstered Ithaca’s growth, positioning it as one of the leading E&P operators in the UK North Sea through the addition of four of the UK’s largest oil and gas fields to its portfolio.

Munich-based infrastructure and mobility services suppliers Yunex Traffic, founded in 2021, was sold from Siemens AG to the public Rome-based company Atlantia in a transaction that was valued at €950 million in January 2022. Yunex has been at the forefront of pushing forward Europe’s mobility revolution through its intelligent traffic solutions that aim to transform cities to places where people can live, work and move more freely with better quality of life, fewer accidents and with cleaner air and contribute to solving our climate crisis.

Belgian pharmatech firm, Syndesi Therapeutics which develops treatments for various neurological conditions, founded in 2018, was acquired by the public company US-based Abbvie for €940 million in March 2022. The deal expanded AbbVie’s neuroscience portfolio, and the company will evaluate the novel mechanism for the potential to mitigate synaptic dysfunction associated with cognitive deficits across a range of neuropsychiatric and neurodegenerative disorders

Amsterdam-based online sports betting and casino games operator BetCity.nl, founded in 2021, was acquired by the public UK-based Entain in a transaction that was valued at around €850 million in June 2022. Online gaming and betting is a growing market, and there are going controls in place to keep these platforms safe and responsible. This deal gives the company access to Entain’s extensive experience in the sector.