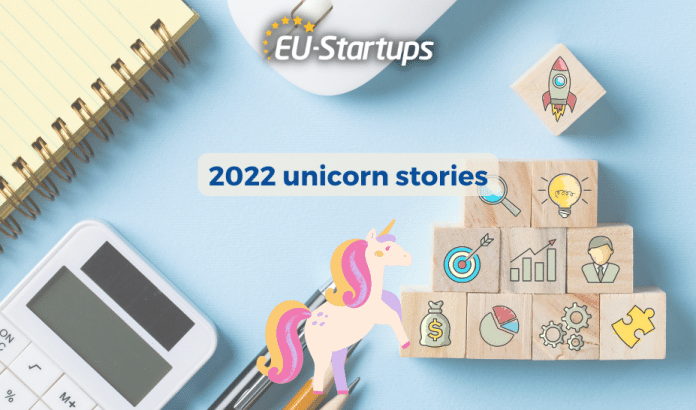 As the year wraps up to a close, we’re reflecting on what’s gone on in Europe’s startup ecosystem. It’s been a pretty interesting year, to say the least, and we’ve been at the front lines of bringing you all the recent and more important updates as they come.

From shocking exits and acquisition deals and bumper-funding rounds to lay-offs and market expansions, 2022 has brought a little bit of everything to Europe’s startup ecosystem, and it’s been quite the ride to be part of.

While 2022 has brought up some of the greatest challenges of our generation (energy, climate, war – to name a few), it also presented some of the biggest highlights. As a result, we got to see Europe’s unicorn club grow.

A unicorn company is one that hits the coveted milestone of a €1 billion valuation. While 2022 marks Europe’s second-biggest year ever in terms of funding, it also was an exciting year for unicorn hunters. In Europe, about 40 companies achieved the status in the first three quarters of the year, showing resiliency in the startup ecosystem, despite the challenges at bay. However, it is important to note that the size of the rounds has shrunk since last year, and the total deal value is likely to be shy of 2021 totals. It’s not a reason for too much pessimism though, as we have to remember that 2021 really was a special year, and the growth seen in 2022 is a positive reflection of the ecosystem’s resilience amidst challenges.

Here we take a look at the fairytale story of ten unicorns from 2022 – looking at how they got there, where they are now, and what’s to come in the future.

London-based talent tech startup Beamery became a unicorn with its latest Serie-D funding round of €47 million in December 2022. The startup is on a mission to empower companies to better oversee, understand and manage the skills they have in their workforce, creating better outcomes for teams and leaders alike. With a team of 443 employees, it has raised a total funding amount of €210 million since its launch in 2014. European tech startups have been providing innovative solutions for HR teams that have become essential parts of business for some time now – and it’s continuing to be a growth area as the demand for skilled talent continues to grow on a global level. Beamery has added global brands like BBC, Uber, General Motors and Johnson & Johnson to its client list.

Barcelona-based global travel management platform Travelperk became a unicorn with its Seriea-D funding round of €101 million, which brought its evaluation to €1.1 billion in January 2022. Founded in 2015, TravelPerk is a pioneering next-generation all-in-one business travel platform offering travellers the freedom they want whilst providing companies with the oversight and control they need. With a team of 1110 employees, it has raised a total funding amount of €384 million since its founding year. After its unicorn status announcement, Travelperk has launched a carbon reduction tool, teamed up with Pleo for travel expense automation and partnered with Soldo to provide seamless travel and expense management. TravelPerk has been growing from strength to strength since it launched, growing 4x in terms of annualised revenue since 2019, as well as doubling its customer acquisition rate in the same time frame. Founder Avi Meir was one of our key speakers at the 2019 edition of the EU-Startups Summit, and we also chatted to him in 2020.

Milan-based innovative payment network Satispay became a unicorn after a €320 million Series D investment round in September 2022. Satispay has developed a mobile payment network, which works as an alternative to credit and debit cards. Launched in 2015, the Satispay app allows users to pay in physical and online stores and exchange money between friends, as well as benefiting from a range of other services such as phone top-ups, bill payments, pagoPA and auto vehicle tax stamps, donations, gift envelopes and savings. With a team of 356 employees, the Italian firm counts over 3 million consumers and 200k merchants as loyal customers, including small stores but also big brands such as Esselunga, Auchan, Benetton, Carrefour, Boggi, Trenord, Eataly, McDonald’s Tigotà, Autogrill, Trenitalia and many more. In an increasingly competitive market, Satispay is one of the very few players who has been able to build a coveted, yet difficult, model and scale.

Berlin-based foodtech startup Choco became a unicorn after a Series-B funding round of €102 million in April 2022. Founded in 2018, Choco is on a mission to transform the food industry’s business processes, bringing them in line with the standards of the digital world. The foodtech firm builds digital tools for food service businesses, doing away with the pen-and-paper and manual spreadsheets that many still rely on to order ingredients and record sales. Not only does this make business more efficient, but it also means that food waste is reduced. With a team of 455, it has secured a total funding amount of €259 million since inception. After its unicorn status announcement, Choco acquired the German app Refill for an undisclosed amount. Choco has been able to tap into a considerable market size and has claimed to have grown its users by 350% over the past year.

Zurich-based Scandit became a unicorn after a Series-D funding round of €130 million in February 2022. Founded in 2009, the Swiss startup is pioneering the use of smart data to give ‘superpowers’ to workers, customers and businesses with impressive speed, accuracy and intelligence. The Scandit Smart Data Capture platform enables smart devices, such as smartphones, drones, digital eyewear and robots to capture data from barcodes, text, IDs and objects to automate and provide insights for end-to-end processes. With a team of 569 people, it has been able to raise a total of €257 million to date. Since May 2020, the company has more than doubled its annual recurring revenue and now has over 1700 global customers including American Eagle Outfitters, Carrefour, FedEx, Levi’s Strauss & Co., Yamato Transport and Sephora – showing resilience through both a global pandemic and the challenges of 2022.

Ghent-based Deliverect became a unicorn after its Series-D investment round of €130 million in January 2022, as it expanded its platform that simplifies and streamlines online ordering. Launched in 2018, Deliverect’s SaaS platform automates restaurants’ online order flow through a single point, taking delivery, table app or takeout requests from services like Uber Eats, Grubhub, Deliveroo, Doordash, Foodora, Shopify and more and transferring them straight to the kitchen. With a team of 501 employees, it has been able to raise a total funding round of €223 million so far. The Ghent founded platform has been enjoying a period of accelerated growth and has now received 100 million orders to date, processing one and half million orders per week in 2021 – a 300% increase from the previous year. Now, the firm services about 20k locations.

Lithuanian startup Nord Security joined the unicorn team after a funding round of €91.6 million in April 2022 that brought its valuation to over €1.4 billion. Founded in 2012, Nord Security’s mission is to build a radically better internet and restore trust in digital networks, by securing consumer and enterprise accounts, networks and information against advanced cyberthreats. The company, which pioneered the mass-market consumer VPN category with NordVPN, aims to help consumers and businesses enhance their security and privacy protections with a holistic suite of products, which allow consumers and businesses to analyze, detect and contain threats at the edge of a network before they penetrate sensitive end-user devices. The startup now has a team of 1162 employees and the round was its first-ever outside capital. After its unicorn status announcement, Nord Security has since partnered with the US-based cloud commerce marketplace Pax8 to offer online privacy and security at a global scale.

Berlin-based consumer-tech subscription platform Grover became a Unicorn after a funding round of €303 million in April this year. This round was a combination of equity and debt funding. Founded in 2015, Grover’s mission is to create accessible ways for everyone to get the tech they want, and in a way that mitigates harm to the planet. With Grover, subscribers get access to a wide range of over 3,000 tech products, including smartphones, laptops, virtual reality (VR) gear, wearables and smart home appliances on a flexible monthly rental basis. Grover’s service allows its users to keep, switch, buy, or return products depending on their individual needs and budget – and circular approaches like this are increasingly becoming. societal norm. With a team of 503 members, it has raised a total funding amount of €2.16 billion since inception. After the announcement of its unicorn status, Grover locked in another €270 million in debt financing funding round, launched an eSIM mobile service in partnership with the US-based Gigs, and, founder Michael Cassau also starred in our podcast.

Barcelona-based HRtech startup Factorial became a unicorn after a €120 million funding round in October 2022. The Spanish unicorn is an all-in-one people-first fully-automated HR management platform, built with SMBs in mind. The company has seen impressive growth since its launch in 2016, and it’ll now accelerate global expansion plans and enhance its offering to SMBs. The firm is uniquely positioned, specifically addressing interconnected problems that SMBs face, right across the world and within almost every market area – namely, catering to hybird/remote work, global talent shortages, and the complexity of HR software. The company has experienced over 200% annual growth in revenue every year since 2019, accelerating to 3.7x growth since the company’s Series B round a year ago and expanding to a team of 800 across offices in Brazil, Mexico and Spain.

Paris-based fintech platform Spendesk became a unicorn after a Series C investment round of €100 million in January 2022. Founded in 2016, Spendesk offers an all-in-one spend management solution that delivers visibility and automation to finance teams. The platform combines spend approvals, virtual and physical cards for employees, expense reimbursements and invoice management into one source of truth. Every purchase made is trackable to a person, project and budget with the aim to free finance teams from the hassle of day-to-day admin tasks. Spendesk is now trusted by thousands of businesses from start-ups to established brands, such as Algolia, Soundcloud, Curve, Doctolib, Gousto, Raisin, Sezane, Wefox. We mentioned Spendesk as one of 10 French startups to watch in 2018 and 2019, reported about their funding rounds in 2018, 2019 and 2020, and welcomed Spendesk CEO Rodolphe Ardant as a speaker at our 2021 EU-Startups Summit.