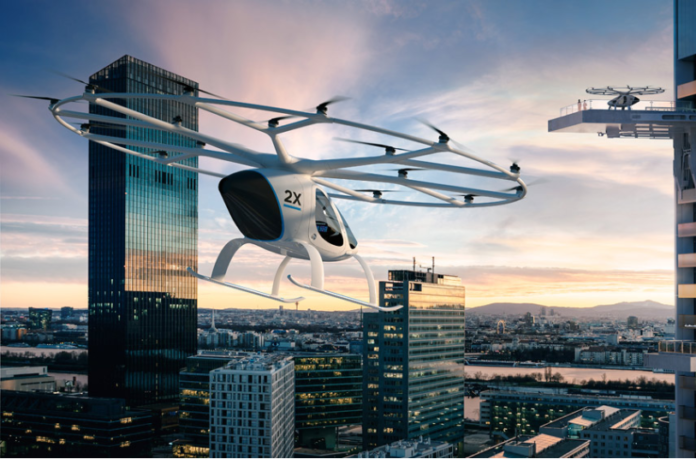 The objective of making flying possible for everyone has drawn closer: The aviation startup Volocopter just closed a funding deal over €25 million with the German automobile giant Daimler and joined by business angels like Lukasz Gadowski (Spreadshirt, Delivery Hero, etc.). Volocopter will use the fresh capital to further expand with its purely electrically driven VTOLs, (eVTOL), speed up the introduction process of the Volocopter serial model and conquer the market for flying air taxis. The safe, quiet and environmentally friendly aircraft, suitable for transporting two passengers, might revolutionize mobility in metropolises. In order to realize this vision Volocopter also invests in the growth of its Bruchsal-based team.

Founded in 2012, Volocopter was granted a provisional licensing for a two seater Volocopter by the German aviation authority in 2016 and in 2017 the aviation startup entered into an agreement with RTA Dubai over the global premiere of an autonomously flying air taxi.

Florian Reuter, the Managing Director of Volocopter stated: “The strong financial commitment of our new investors is a signal as well as proof of the growing confidence in the newly emerging market for electrically driven VTOLs put to use as personal air taxis. We deliberately sought a mix of investors with strategic and entrepreneurial backgrounds  and were able to implement this perfectly with Daimler und Lukasz Gadowski.”

The investor Lukasz Gadowski, who has successfully founded and financed many successful tech enterprises in the recent past, commented: “I have been interested in flying cars and following their development for a while. When I saw the Volocopter I got it: The “flying car” has no wheels! What is exciting at Volocopter is not just the magnificent vision but also that which has already been tangibly implemented. Huge ambition with both feet on the ground – a unique combination! In the coming years we can expect a revolution in manned aviation. We at Volocopter will significantly contribute to shaping it!”

Together with its partners, Volocopter will be using the fresh capital to accelerate the development of the Volocopter up to production maturity and commercial licensing through aviation authorities worldwide. Amongst other things, extensive test flight programs are envisaged for this purpose. In order to speed up progress, the employment of additional engineers specialized in the development of flight systems, software and electric propulsion as well as the development of commercial function is envisaged.

To introduce the Volocopter serial model to the market with full impact the company will also apply the investment to developing brand awareness. The prelude to this will be the new website which is launched today. In addition a professional communications team all around marketing and PR will be installed in order to be optimally equipped for planned events and demonstrations of the Volocopter in the coming months.