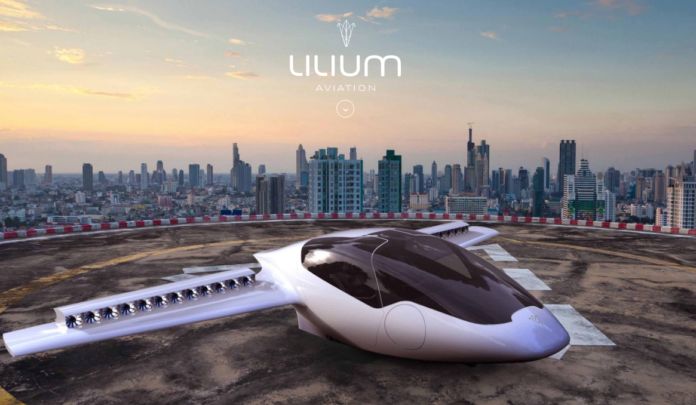 Lilium Aviation, a Munich-based startup which develops electric planes capable of Vertical Take-Off and Landing (VTOL), has raised a €10 million Series A funding round. The investment will help bring to market the Lilium Jet – a lightweight commuter aircraft. This brings us one step closer the possibility of environmentally-sustainable air travel.

Lilium Jet aircraft is capable of carrying passengers into the heart of towns and cities without the extensive airport infrastructure required by traditional planes. Also they do not make loud noise like regular helicopters. This aircraft has the potential to transform existing urban congestion and enable people to move around more safely and efficiently.

The Lilium Jet is constructed using lightweight composite materials and powered by 36 directable, ducted electric fans, mounted along the wings and front pods. With an expected range of 300 km and estimated top speed of up to 300km/h, the Lilium Jet promises inter-city travel, faster than any widely available mass transit system. San Francisco to Palo Alto would take less than 15 minutes. Munich to Frankfurt, just over an hour. When used as an air taxi, the Lilium Jet is expected to cost less than a conventional car service. Energy efficiency will be better than or comparable to an electric car, with the additional benefit of taking pressure off congested roads. However there are

Lilium Aviation was founded in 2015 by CEO Daniel Wiegand along with his three co-founders – a group of engineers and former doctoral students from the Technical University of Munich. The company was set-up with the support of the European Space Agency’s Business Incubation Centre in Bavaria.

Daniel Wiegand, CEO of lilium Aviation: “With our technology we can triple the radius of people’s lives while preserving our environment, avoiding congestion and eliminating the cost of infrastructure. We can also flexibly connect whole states to single metropolitan areas. A personal vertical take-off and landing aircraft has been the dream of generations. It is the ultimate means of transportation. We want this dream to come true for everybody in the form of the VTOL Lilium Jet.”

The current investment was made by Atomico, a leading venture capital firm based in London, and follows follows a smaller initial investment in June 2016. Flight testing of the first full size Lilium Jet prototype is due to begin in early 2017. These are going to be first tests in industry. Also the investment is going to be used to expand companie’s existing team of 35 specialists and product engineers, based in Munich, Germany.

However industry experts have been critical about the success of this project. Check out this article from Wired for an alternative view.

Share
Facebook
Twitter
WhatsApp
Linkedin
Previous articleEurope’s tech talent: Where they are, who they are and what they earn – according to analysis by Balderton Capital
Next articleAzureDesk: The affordable cloud based helpdesk software for startups and SMEs (Sponsored)

15 of the best Startup & VC Newsletters you should subscribe to