The Berlin based startup Wooga, which is the world’s third biggest developer of social games, will be attending this week’s GDC (Games Developers Conference) in San Francisco, in search of new industry talent.

Jens Begemann, founder and CEO of Wooga, will hold a speakers session discussing the company’s expansion out of Europe. The session, entitled “Growing out of Europe”, will see Begemann looking back at the lessons learned from starting a social games company in Europe. Wooga’s founder and CEO recently stated: “Our focus now is to bring talent from all over the world to Berlin, and join our international team of employees. GDC is the perfect place to find those people and help us make the best, most social games in the world.”

Wooga will also offer plane tickets for the most promising candidates they meet at GDC to come to Berlin and get a taste of where the startup is heading in 2012 and beyond. Ticket holders will experience the “creative and forward focused lifestyle” the German capital offers and have an opportunity to join Wooga’s team of 150 employees from 28 countries. 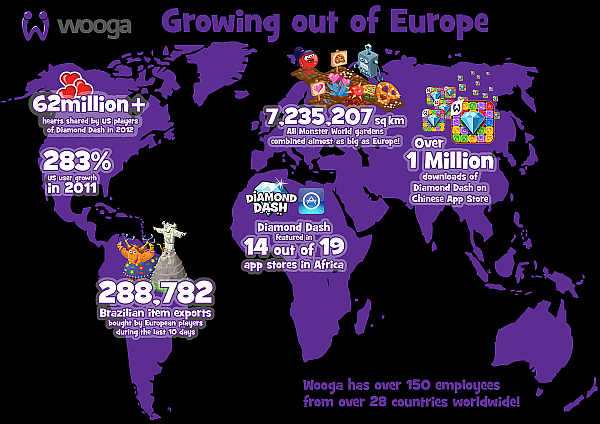 Wooga plans to add 100 employees to its team in 2012 as part of its organic growth goal. All employees receive an education budget that some members of the team are using to attend GDC this year. With extra holiday days for the event they’ll have time to share experiences, learn from others and take in the sights of the Bay area.

The social games company Wooga was founded in 2009. The startup’s free-to-play Facebook games are enjoyed by over 50 million active players per month – 70% of which are women. Wooga’s games generate revenue by selling interactive goods. Monster World players (for e.g.) have bought more than 100 million magic wands so far – making Wooga the biggest supplier of interactive magic equipment in the world. Last month Wooga announced a 185% increase in users for 2011 and a focus on mobile platforms for 2012 where the young company will bring its most successful social games to mobile devices.

Find out more about Wooga and check out the interview we did with Jens Begemann back in December of 2010.

“Do I really need external funding and is my company really a VC case?”: Interview ...