The Berlin based social games publisher Wooga just reported that it saw its user base grow by 185% in 2011 – surging from 14 million in January 2011 to over 40 million users currently playing Wooga’s games every month. New games Diamond Dash and Magic Land launched on Facebook, with synchronized mobile versions following shortly after that enabled players to connect across platforms, and in turn brought Wooga’s total to six Flash and two mobile games.

This expansion was thanks in part to a $24 million Series B Investment that the company received from investors led by Highland Capital Partners in May. In line with its increased user base Wooga has also seen its number of employees increase from 60 at the beginning of 2011, to a multinational team of more than 140 people, with a growth rate of two employees per week.

Jens Begemann, Wooga Founder and CEO, stated in relation to the company’s growth: “Wooga’s growth is organic in every sense. Only 5% of our new users come through paid ads and 40% through viral features, with the remainder coming from cross-linking through our existing games.”

All of Wooga’s games are free-to-play and social by design, closely evolving with the Facebook platform. In 2011, Wooga continued its close partnership with Facebook through Open Graph and the development of the HTML5 platform.

Concerning the partnership with Facebook and Wooga’s plans for 2012, Begemann said: “The upcoming Facebook IPO shows the potential the social network and social games possess. In 2012, Wooga will hire 100 additional employees in order to further develop high-quality social games and to focus on upcoming mobile titles.”

Wooga was founded in 2009 and has grown to be the number 3 games publisher on Facebook. All games combined, Wooga’s servers handle about 30 billion requests per month from its network of games, generated from user actions such as using a magic wand in Monster World to playing a round of Diamond Dash.

To find out more about Wooga and its Founder Jens Begemann – check out the interview we did with him. 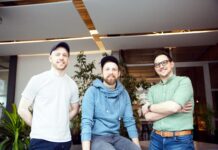