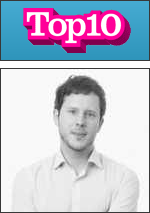 We recently had the chance to do a short interview with Tom Leathes – the co-founder and CEO of Top10. Launched in September 2011, the London based startup created an opinion platform which enables anyone to create lists about what they love and share them with friends. Tom and his team were able to attract some well-known investors (3.5m in Series A financing from Accel Partners, Founder Collective and others) and by the end of 2011 Top10.com announced a partnership with Spotify (Top10 Spotify App). Enjoy the interview:

EU-Startups.com: When have you or your partners had the idea for Top10.com and what made you sure it was the right one?

Tom Leathes: The idea for Top10 actually developed over a few years. Recommendations and reviews have always been a big influencer of online purchases, but it’s only relatively recently that people have become comfortable sharing their opinions in easy ways. We want to collect all these diverse product opinions in smart, structured ways, to build a powerful platform to discover and share products. That’s a big challenge, but we believe we’ve got the best way to achieve this, and we’re really pleased to finally be building it!

EU-Startups.com: What makes Top10.com unique or better than other recommendation platforms out there?

Tom Leathes: There are a bunch of services in the ‘recommendation’ space, and everyone’s approaching it in different ways. We think that Top10 is a very clear proposition for consumers, and it’s directly relevant to how people already search for and discover products.

EU-Startups.com: You were able t o attract some well-known investors ( 3.5m in Series A financing from Accel Partners, Founder Collective and others) and by the of 2011 you announced a partnership with Spotify (Top10 Spotify App) . What is your secret of success? Could you provide our readers with some basic tips on how to attract investors and establish great partnerships?

Tom Leathes: Gaining investment for new startups is never easy, but if you have a great team (most importantly), and a killer product, then in today’s environment raising funding should not be an issue. For Top10, we approached the investors we felt best fitted our ambitious plans for the business, as well as the individuals we wanted advising us in the crucial early stages.

As for tips… for a tech startup it’s very important to build something before going after investors, and the more traction / market proof you can achieve before talking to investors, the better. Make sure you have an amazing founding team; it’s very hard to build a successful company with just one person’s vision – if you can find a co-founder/s with complimentary skills, you’ll be much more likely to succeed.

EU-Startups.com: Top10.com is a great domain-name which probably has a long history. Could you tell us something about its history and on how/when you were able to purchase it?

Tom Leathes: The Top10.com domain name was previously owned by Idealab, a technology incubator in California, who originally registered it way back in 1996. We acquired the domain from them in 2010, and they’re an investor in the company – I can’t go into details on the deal, but we are thrilled to both have the domain and Idealab as a partner in Top10 going forward.

EU-Startups.com: Right now, Top10 is available in English. Do you have any plans to support additional languages or enter additional markets within or outside the EU soon?

Tom Leathes: Right now we’re English-language only, but we definitely hope to bring support for other languages in due course. We are already seeing lots of activity from Brazil, India and Japan, as well as other European countries, which is very exciting. Whilst the site’s in English, users can actually contribute in any language they want.

EU-Startups.com: How many people are currently working for Top10 and how do you support the corporate culture?

Tom Leathes: We’ve currently got 11 people in the team, and we were 4 people just 6m ago, so we’ve grown pretty fast. Incredible people are by far the most important thing for a startup, and we’ve worked hard to build the best team we can. Our engineers come from really diverse backgrounds, from the BBC to PlayFish, so we have a great spread of experience.

The culture is obviously really key, and it’s partly driven by the kind of people you bring into the team. We’re also really focused on making Top10 an amazing place to work – that means ensuring people are developing fast and always learning, working on interesting problems, and have an inspiring environment to work in. We’re going to be growing fast from here, so this is still our #1 priority going forward.

EU-Startups.com: What is you first impression about Top10’s market acceptance after your launch in 2011, and what kind of marketing strategies are you going to use in order to promote the recommendation platform ?

Tom Leathes: We have seen great uptake of the product since we launched in September – it’s only been a few months and we’ve already seen tons of activity on the website, and our Spotify app has been hugely popular all around the world, having only gone live at the end of December. Having a lot of users quickly is really useful in identifying and iterating on what’s working. We get a lot of direct feedback from users too, which is also super-useful as we’re iterating on the product all the time.

EU-Startups.com: How is your experience with London as a location to start a company?

Tom Leathes: London is definitely better than it’s ever been as a startup hub – there’s access to good investors, a huge business community, as well as strong networks with other startups. London has a lot to prove – we need a couple of big global tech successes, and I hope that’s something we should see happening in the next couple of years. Generally, there are a lot more exciting startup hubs developing outside of Silicon Valley (Berlin, Tel Aviv, New York etc), so it’s great that the industry is becoming more global.