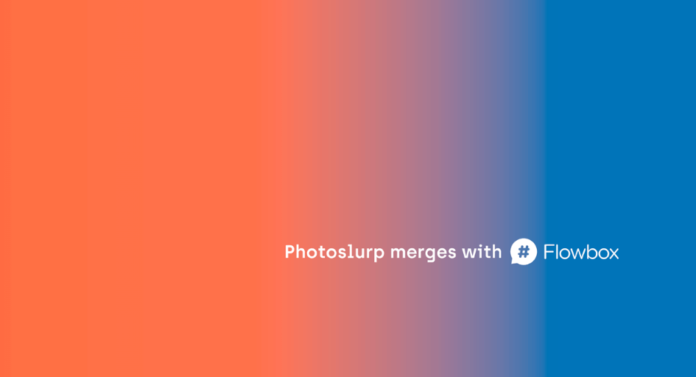 A new European giant has arrived in the social media marketing world and it has come via a merger between Photoslurp and Flowbox. The agreement will see the two companies join forces under the name Flowbox.

For marketing teams, leveraging social media is a fundamental approach to connect and engage with customers, and, consequently, drive revenues. Two platforms that have been enabling companies in Europe to leverage customers’ social media accounts and interactions, Photoslurp and Flowbox, have now merged to lead the sector.

Social media is giving marketing teams endless possibilities to drive conversions, clicks and revenues. It can be used to grow communities, create hype around a product, and sell. This merger, therefore, represents a big move in the sector, putting the new Flowbox as an undisputed European giant.

CEO of Photoslurp and future Chief Revenue Officer at Flowbox, Eulogi Bordas Casas, commented: “There are great similarities between Flowbox and Photoslurp, both technically, commercially, and culturally. By merging, we create synergy effects that lay the foundation for continued strong growth, not only in Europe but globally.”

Founded in Barcelona in 2015, Photoslurp’s visual commerce platform allows brands to use  User Generated Content (UGC) created by their fans and customers. The pioneering platform scans social media for photos and videos of customers with a brand’s products and then integrates them into the brand’s store, making them ‘shoppable’. It leads to more engagement between consumers and companies and also drives conversion rates. In 2017, we reported the team’s €750k raise. Some of Photoslurp’s customers are United Colors of Benetton, KARL LAGERFELD, and Havaianas.

Flowbox, a startup with roots in Stockholm, offers a visual marketing platform that allows brands to leverage and distribute social content throughout the buyer journey – increasing engagement, social proof and sales. Like Photoslurp, it enables brands to collect, moderate and integrate content onto their websites, online shops and social channels. It was founded in 2016, and, in 2020 we reckoned it was a startup to keep an eye on after it raised €7.5 million (prior to this it was bootstrapped) and set its sights on expansion.

Marcus Carloni, CEO of Flowbox, said: “Photoslurp is a very good match for us. They are a major player in Europe but also in South America, which complements our previous customer base well. South America will actually be a completely new market for us. The company has also developed a similar platform, which makes the integration work smooth. We are now migrating their more than 300 customers, which gives us a total customer base of over 850 customers in 40 countries.”

Together with this merger, the company will grow to a total of 70 employees distributed across Stockholm, Amsterdam and Barcelona – hitting important hubs of growth and innovation in the continent.

Eivind Bergsmyr, Partner at Viking Venture and Chairman of the board at Flowbox, added: “Demand for marketing platforms like this continues to increase and this is reflected in Flowbox’s topline growth. Through the strategic merger with Photoslurp, we will continue this journey and expand to new geographies as well as product areas.

Danish startup JumpStory has now raised over €2.8 million for its ‘Netflix of images’ platform