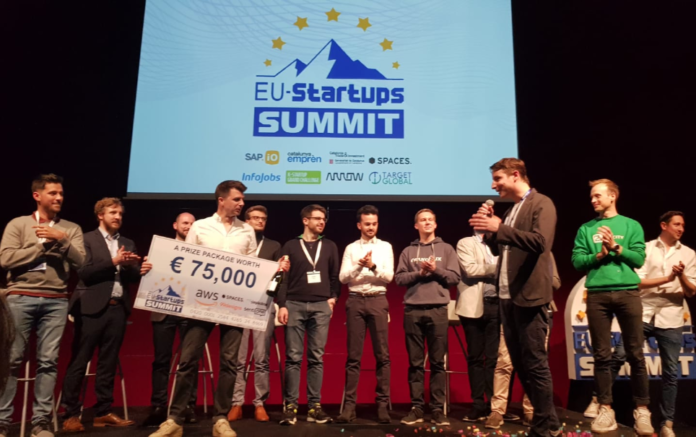 As announced a few days ago, we’re going to host this year’s edition of the EU-Startups Summit as an online event on April 28-30. We’ll have inspiring speakers like Glovo CEO Oscar Pierre, Unbabel CEO Vasco Pedro, HolaLuz founder Carlota Pi (and many more!), great networking opportunities, but most importantly: An exciting Pitch Competition with 15 of Europe’s most promising early-stage startups!

The Prize Package: The winning startup team of this year’s Pitch Competition will receive a prize package with a value of roughly €85,000 and gets prominently featured by EU-Startups and other publications. The prize package will likely include up to €50,000 in AWS Credits, €9,000 in credits for an enterprise package of the social media monitoring tool Senti.One, €8,500 in credits for an explainer video maker account of mysimpleshow, €2,000 in credits for the design platform 99designs, a Spaces coworking membership for 2 people & 1 year (value: €4,800), a 1 year Guru Plan for SEMrush worth €2,200, and a 1 year business subscription for the sales CRM ForceManager (value: €7,800). There will still be additions (and other changes) to this package and we’ll announce the final prize package by the end of February.

The Jury: The selected teams will get a lot of valuable feedback from a jury of well-known venture capital investors. The jury that we put together for the in-person editon of our EU-Startups Summit consited of Reda Bensaid (Eight Roads), Beatrice Aliprandi (Talis Capital), Borja Breña (Nauta Capital) and Lina Chong (Target Global). We’re currently re-confirming and reassembling, and the final jury will be announced by the end of February.

In addition, we’ll have many more VC firms, business angels and startup accelerators among our attendees. And: We’ll have good networking functionalities which will help you to find the right contacts.

Apply now: If you’d like to pitch your startup with a 2-minute-presentation in front of a large and interested audience of investors, startup enthusiasts, media people and an expert jury, you can now apply here! The application deadline is on March 15.

Precondition: Your startup should be in pre-seed or seed stage, not older than 2 years, should have raised no VC funding yet (or less than €500K) and has to be based in Europe.

Timings & Tickets: The EU-Startups Summit will take place on April 28-30 online. Aside of the pitch competition there will be many more highlights that will be announced soon. Tickets are available here.