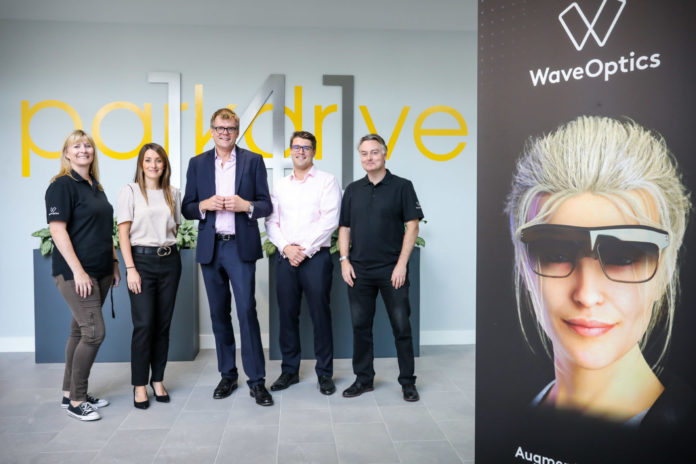 Augmented reality (AR) has taken off in recent years, offering the ability to enhance natural environments through perceptually enriched experiences, with applications in art, architecture, marketing, and education. Using AR technologies, users can interact with and digitally manipulate information in the surrounding world.

UK-based WaveOptics is a designer and manufacturer of diffractive waveguides – the key optical component in wearable AR devices, such as smart glasses. The startup has just raised €23 million in a round led by Octopus Ventures, along with existing investors IP Group, Robert Bosch Venture Capital and Gobi Partners, as well as new investors Goertek and Optimas Capital Partners.

AR wearables enable users to see computer-generated images overlaid on top of the real world. There are two key elements that allow these images to be seen – a light source such as a miniature projector, and a means of transferring the image from the projector into the user’s eyes.

What WaveOptics’ technology does is transfer the light waves from the light source and project them into the user’s eye. The technology produces a large eye-box (or viewing window), from which the full image is visible. WaveOptics’ waveguides deliver crisp, undistorted text as well as stable imagery.

The capital raised will be used to scale up business operations nationally and internationally, and build WaveOptics’ manufacturing supply chain to meet customer demand from Asia and US markets.

Founded in 2014, WaveOptics, which is based in Abington, UK, also has offices in Los Angeles and Taipei, and plans to open a new office in Beijing in 2019.

David Hayes, WaveOptics CEO, said: “We have made excellent progress over the last year with our high performing, manufacturable, and versatile waveguides. We are now working with a wide range of leading global OEMs and ODMs as they ramp up the development of their products.

“These additional funds will enable us to scale up rapidly around the world, particularly in Asia and the US. This will include our ability to manage and support an increasing number of customers across different sectors. The market is gathering pace with AR wearables expected to become available in volume by the end of 2019.”

Simon King, Principal at Octopus Ventures, added: “WaveOptics has now established its position as the key optical technology provider to its global customers and partners. They are unique in their ability to build AR hardware solutions at scale to address the numerous opportunities in the emerging AR ecosystem.”

Mary Loritz
Mary served as Head of Content at EU-Startups.com from November 2018 until November 2019. She is an experienced journalist and researcher covering tech and business topics.
RELATED ARTICLES
EU-Startups Podcast