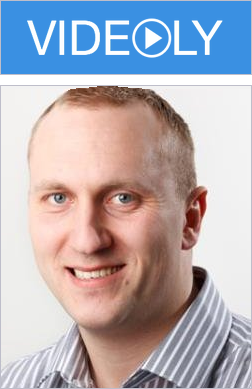 Over the weekend, we had the chance to do an interview with Konstantin Zagaynov, Co-founder of Videoly.co.

The Helsinki- and Berlin-based startup Videoly is an e-commerce tool that helps to increase sales by plugging-in video reviews to online stores. Its intelligent video search technology picks relevant product video reviews from user generated videos. Users watch video reviews right on the product description page without walking away to other sites. Konstantin Zagaynov also represented Videoly at the pitch competition of our recent EU-Startups Conference in Munich. A few weeks ago, Videoly.co secured €120K from the Finnish investors Reaktor Polte and Tekes. But enough with the introduction, enjoy the interview:

EU-Startups: How did your co-founders get the idea for Videoly.co and what made you sure it was the right one?

Konstantin Zagaynov: A legend tells it that idea was born when Sergey was shopping in the grocery supermarket in October 2013. He was thinking, “why can’t I point my smartphone or Google Glass to this product and see what other people, who had tried this product, say about it”. Discussing this problem Sergey and Natalia came to an idea of a bridge between customers and stores. Somehow they should be connected and help each other within shopping process. Profit to customers was an evidence. But what value could we bring to shops? And the answer is increasing conversion, increasing sales. A demo product, Videoly add-on for Chrome browser, that automatically adds videos when a user browses Amazon or eBay, was created quickly and it became valuable for our friend users.

EU-Startups: Videoly is a great name for an ecommerce tool in the video space. How did you come up with the name and what other options did you consider?

Konstantin Zagaynov: Choosing name was not easy. We wanted functional, descriptive, yet modern and fancy name. Ideally, with available corresponding domain names. First, our friend Lena Felixberger from descape.de, who has strong background in
copywriting, and our mentor Christoph Räthke have organised a structured name-choosing workshop for us. As a result, more than twenty functional name ideas were born. Then, Videoly.co team had one Skype call that took 3 hours 🙂 After one hour, I said to my co-founders: “guys, I will drop out of the call. Decide between yourself about three best options and then let me pick one out of those”. When they called me back at 11PM, I immediately chosen “Videoly” out of those three. Combination with “.co” makes it sound
even better.

EU-Startups: What makes Videoly unique or better than other ecommerce video review tools out there?

Konstantin Zagaynov: Video describes a product much better than hundreds of pictures or text. When one sees other people saying good about the product in front of the
camera, a trust to this product is higher than after reading text description. One amazing example is this video, where a blogger stands for ten seconds under a waterfall in order to showcase that the jacket he reviews is indeed waterproof. This video has been shown to me by a friend who had earlier bought this jacket after watching this video.

In video selection, we bet on authenticity: our user tests have shown that shoppers value video reviews from independent bloggers and consumers a lot.

And the magic that Videoly brings is that we match thousands such reviews to the thousands of products on online shops.

EU-Startups: How did you manage to get funded while working in three different countries?

Konstantin Zagaynov: Indeed, while three members of the founding team have been knowing each other for years (Sergey and Natalia, for example, worked in the same team
in Yandex for many years), we worked in different geographical locations when we started. It was obviously a challenge, however, we were very scrupulous in how we organise processes of working together and how we share information between each other. This also gave us a very nice opportunity to make international business from day One. We went to talk to shops in every location we were and after several customer interviews we
had a footprint about how shops operate in three so different geographical and cultural locations: Scandinavia, Russia and Central Europe.

I think that was also partly a reason why we captured an interest from Finnish investor: e-commerce market in Germany is much bigger than in Finland. Talking to investors in both Finland and Germany, we’ve got an impression that in Finland investors are more willing to invest into earlier stages. However, same company probably would be valued higher in
Germany than in Finland.

EU-Startups: The team of Videoly is split between Espoo and Berlin. Are you planning to move together to one headquarter in the near future? If so, which city will it probably be and why?

Konstantin Zagaynov: We will continue to build company in both Espoo/Helsinki and Berlin. Espoo will be HQ and will be a home for core technology team. Berlin will be sales and customer service hub.

EU-Startups: What are the next steps or milestones for Videoly?

Konstantin Zagaynov: Business-wise, we are working on several partnerships with big online stores. We also want to invest time and money into bringing to the next ambition level our technological core, our video search algorithm that is tailored to finding relevant product video reviews in YouTube. Soon Videoly will be able to categorise product video reviews based on genre and have powerful video quality filtering. For that, we are looking for investors to join us in the seed round early next year.

EU-Startups: Could you recommend our readers one or two books that helped you during your entrepreneurial endeavors?

Konstantin Zagaynov: Personally for me such books are “Mom test” by Rob Fitzpatrick, “Getting real” by 37 signals and “Linchpin” by Seth Godin, and of course “Lean Startup” by Eric Ries.