Spartoo.com, a leading European online-shop for shoes, has just announced that it was selected to be among the top 20 fastest growing European companies on the internet. The ranking which Spartoo refers to was established by the American magazine Internet Retailer.

Spartoo was founded in 2006 and is headquartered in Echirolles (France). According to the young company, the Spartoo group is growing faster than ever thanks to almost 70% growth in 2011 in comparison with 2010, leading to a turnover of almost 100 million Euros. My guess is, that this recent growth boost comes (at least partly) from the acquisition of Spartoo’s UK competitor Rubbersole.co.uk in 2011.

Spartoo.com sells shoes throughout Europe, including 12 specially targeted countries, meaning 12 websites which have been entirely translated into the local language, with their own specific marketing services and special offers. To this end, specialised teams dedicated to customer services and marketing for each country are located in France. As such, Spartoo is a multicultural company of 150 employees, including at least 15 different nationalities.

Boris Saragalia (Spartoo, CEO) stated in a recent press release “In 2012, Spartoo.com is going to build upon five years of solid growth. We are counting on a turnover of 140 to 150 million Euros. The goal is to win over markets in each of the countries that we’ve recently opened, just like we did in France.”

Albert Bosch, CEO of Housfy, will speak at the EU-Startups Summit about how to build a fast-gro... 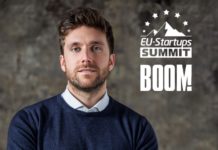 Federico Mattia Dolci, CEO of BOOM imagestudio, will speak at the EU-Startups Summit about fast...

IPO around the corner? Zalando reports operating profit in Q2