isePankur, the social-lending service, was established in 2008 and pioneered the concept of social lending in Estonia. The service allows individuals and small to medium-sized enterprises to borrow and lend between each other, skipping the whole traditional banking process. The company has just opened up a white-label of their service, allowing other institutions to take a solid social lending platform to their area. Find out more about it on ArcticStartup.

The Currency Cloud has a inked a $4 million Series-A funding, led by Atlas Venture with follow-on participation from Anthemis Group. Maybe you don’t need to launch at SXSW to make noise? The company previously raised $2 million from Anthemis and others. The money will be used to ramp up product and commercial activity. Read more on TechCrunch.

Spotify finally rocked up to the German online music party today, and while this has caused much fanfare with the expat/hacker community in Berlin who have sampled the music service previously or though proxies, we wonder if it’s missed the action? Could delays in securing the right partnership deals and wranglings with the notoriously prickly GEMA mean that Spotify won’t be a key player in the revolutionary scene that it helped to kickstart? Read more on VentureVillage.

Fellody‘s free Spotify app allows users to find and connect with people who have a similar taste in music. It certainly brings a whole new meaning to ‘music lovers’. As you might know, Spotify is the world’s largest on-demand music streaming service. That is something which, according to Fellody – a mixture between music, matchmaking and social networking – means there is plenty of potential for finding the musically perfect partner. Visit SiliconAllee to find out more. 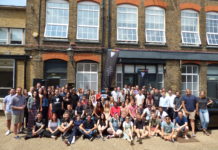 UK-based Festicket has raised €9.3 million to revolutionise the live music experience for festi...