MedTep aims to build the LinkedIn for the medical world 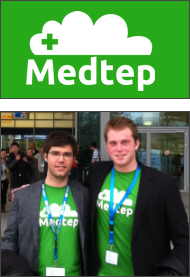 During my recent visit to Barcelona I had the chance to talk to the creators of MedTep. The founders Pablo Pantaleoni and Jacob Suñol are aiming to build the LinkedIn for the medical world – a save venue where patients, doctors and medical suppliers can interact.

Let’s face it, most doctors in Europe still manage health records in paper form or offline on their computers. This complicates the possibility to share health records with patients or with other doctors (e.g. when a patient moves). MedTep has created a save and stable online solution for that problem. Aside of regular health records, MedTep also allows to store data like radiographs and ultrasound images. With a login code, which patients will then get from their doctors, they can log in to MedTep from their home computers (for e.g.) and have access to their material. Doctors are going to pay a monthly fee to use the service. In some markets MedTep has a few competitors in this space who usually offer their service for a much higher price than MedTep will do.

Over the last months Jacob an Pablo have created a MedTep version that is currently being tested by some medical professionals. The MedTep-team, which consists of three people right now, already established some great contacts in the medical world. The official launch of MedTep is going to take place in the 4th quarter of 2011 (around September).

MedTep will be available in a English and Spanish version from the beginning. The next language versions are going to be German and French. One of the challenges of MedTep’s future internationalization are the country specific regulations, which differ quite greatly from country to country.

Right now MedTep is completely bootstrapped. Due to its subscription based business model and the fact that MedTep serves a real need of the medical world, I think that Jacob’s and Pablo’s startup has good chances to reach profitability in the short term.

“The value is in our community” | Interview with Fernando Dellepiane, Co-Founder of Vermut