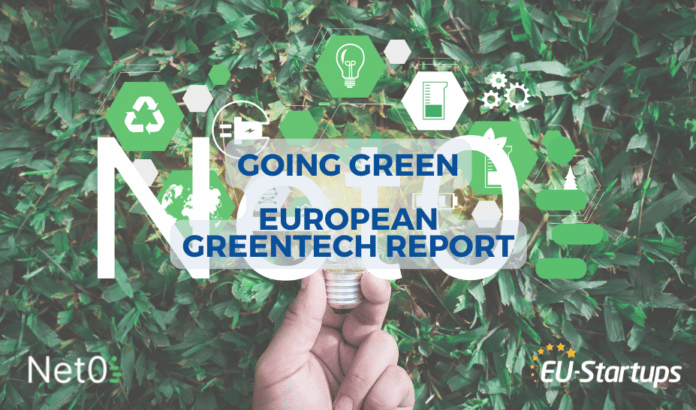 GreenTech is one of the biggest growth areas in the innovation and startup space, on a global level. It’s a market area that has the potential to shape and influence our future for the better, and investors and entrepreneurs are actively promoting development in this space. This report, powered by Net Zero Insights, aims to give an overview of everything that happened in GreenTech across Europe in the past month.

GreenTech refers ​​to the use of tech that has a positive environmental impact at its core. It refers to those companies that are founded for a wider purpose – it could be reducing carbon emissions, tackling pollution, minimizing waste, protecting the world’s ecosystems or anything that contributes to making life on earth more sustainable and less harmful.

This month, we noticed a slowdown in terms of funding after October’s GreenTech gold rush. It’s not to say there haven’t been exciting updates and developments, but there is certainly a noticeable decrease in funding amounts – approximately 67%! This month, some things did stay the same with EVs and the energy transition picking up most of the cash.

In total, European startups in the climate and GreenTech space raised just over €1 billion in November – down from over €5.2 billion in October. France, Germany and the UK were the powerhouses of the continent, taking up 78% of the continent’s funding. While Europe didn’t raise as much as the US this month, there were more deals (99 compared to 93 in the US), which suggests that the wider spectrum of innovation is still strong. The top three European rounds were: Verkor (France – €241 million), Volta Trucks (Sweden – €58 million) and The Modern Milkman (UK – €55.9 million).

European startups and innovative thinkers are at the forefront of trying to make Europe more climate-friendly and planet-positive, uniquely positioned to be agile, to think outside of the box, and to dare to challenge the status quo. It’s imperative that, as a community, we continue to support innovation in this space and encourage new ideas to flourish.

As November came to a close, Europe’s cities got ready for the ‘most wonderful time of the year’ – Christmas. As many people flocked to see Christmas lights turned on, enjoy festive treats and begins to get the sparkle season underway, there has been one noticeable difference this year – the lights aren’t shining quite as brightly as in previous years and it’s brought home that we are currently living in turbulent times.

Rising energy costs, the fuel supply chain issues, the war in Ukraine and the worsening energy crisis have left Europeans feeling the pinch at home as winter bites and the Christmas lights are a little dimmer. It brings home the sheer importance of a green transition right now. We need it to protect our planet, to give energy dependence and ensure a bright future for the years to come.

In light of this, it’s no surprise that startups fueling the energy transition remain at the forefront of GreenTech innovation. Alongside this, and intrinsically linked, is a rising momentum to tackle greenwashing in this space and ensure energy across sectors is more efficient and greener.

November also saw the COP 27 conference take place – and it was an eye-opening affair this year. From the realisation that we are not reaching the targets previously agreed upon to empty promises and widespread criticism being raised, one thing that also caught our attention was the UN Secretary-General, Antonio Guterres’ words: “We must have zero tolerance for net-zero greenwashing.”

Greenwashing is an incredibly harmful phenomenon within the wider GreenTech space, and the words from the UN Secretary-General just highlight the damage that it can have. In Europe, while a strong tradition for green innovation and sustainable impact is growing, we are also seeing startups endeavour to tackle greenwashing and bring tangible, transparent sustainability to society.

According to research carried out by Supercritical, a software platform tackling greenwashing by bringing companies to net zero via data, employees care about meaningful climate action – and they want their companies to take it seriously and be transparent about it. The data suggests that many employees, especially Gen Z team members, will quit their jobs if they feel their company isn’t taking it seriously.

Michelle You, co-founder and CEO of Supercritical, said: “COP27 should be a wake-up call for businesses that have buried their heads in the sand for too long. Not only are their employees willing to quit over inadequate climate action, but a majority want to see their company taking the conference seriously and doing something about its output. It’s time for businesses to get on the same page as their employees on climate, or they could be in for a real shock.”

The time has come for greenwashing to become a thing of the past. Sustainability and green initiatives can no longer be buzzwords, used to jump on the bandwagon and curry favour – they now have to be legit, tangible and genuine.

With this in mind, it encouraging this month to see that Ecosia, the green search engine which uses 100% of its profits to reforest the planet and tackle the climate crisis, launched a new climate pledge rating feature to help users understand the climate action commitments of major organizations. The Climate Pledge Rating now appears in the search results of the most-searched companies on Ecosia, including Amazon, Meta and Spotify. The rating analyzes the open climate commitments of each company compared to the 1.5°C goal set by the Intergovernmental Panel on Climate Change. The aim is to help users understand the role of individual companies in the climate crisis and help highlight any greenwashing statements.

In November, we took a deep dive into Europe’s climate and GreenTech investment agenda – finding that it tops the priority list for both the public sphere and the private sphere. You can read more about it here, and discover how Europe’s VC and startup community have been working collaboratively to bring about innovative and promising solutions. We put a spotlight on the EIF’s commitment to mobilize €2.5 billion of climate action and environmental sustainability investment across Europe through five equity funds, as well as Antler VC’s update, where they shared that 2022 has been a record year for climate tech. The firm invested in 17 European startups developing tech or products to improve sustainability and address climate change throughout 2022 so far.

Anne Tutar, Partner at Antler, comments: ”We are seeing an unprecedented influx of highly skilled entrepreneurs and inventors dedicating themselves to innovations that will make a difference in the fight against climate change. With demand increasing from consumers and businesses for sustainability, there has never been a better time to become a climate tech founder and create a startup that is directly addressing climate change.”

At EU-Startups, our aim is to put a spotlight on exciting startups and innovative and inspiring entrepreneurs and thought leaders from across Europe’s startup ecosystem. We think it’s important to shine a light on those making an impact, and firmly believe that highlighting innovation, sharing ideas and promoting bold ideas that aim to make a change in the world is one way to contribute to a more positive society.

Other news catching our attention:

We like to keep a very close eye on GreenTech news as the month unfolds. The updates we reported on this month:

What is your opinion on the main conclusions from COP27 and are these findings capable of helping to create a more sustainable future?

At COP27, the energy sector emphasised the need for immediate rapid reductions in global greenhouse admissions, and stressed the importance in accelerating transitions to clean energy.

To that I would add that the reliance on international energy resources, namely Russia, has contributed to an energy crisis. If enough countries moved away from Russian oil and gas and began harvesting clean, renewable energy from the sun, they would gain energy independence while helping the wider world fight global warming.

How should green businesses adapt to the policies and plans proposed at the conference, including the action plan to target sectors which account for more than 50 per cent of global greenhouse gas emissions?

Businesses and even individual buildings can and should be energy-independent, harvesting all the energy they need from the sun. Any excess energy should be contributed back to the grid for distribution elsewhere. The technology exists for this to be a reality; all that is needed is the will to make it so, from business and property owners and developers, as well as governments and nations.

This report is brought to you with support from Net Zero Insights.

Net Zero Insights develops an AI-powered software to access information about 44k+ climate tech startups in Europe and North America. For each organisation, the Net0 Platform provides details such as climate impact, patents, financials, traction, contacts, and much more. Investors, corporations, researchers and policy-makers use our platform to keep track of climate innovation and understand technology and financial trends