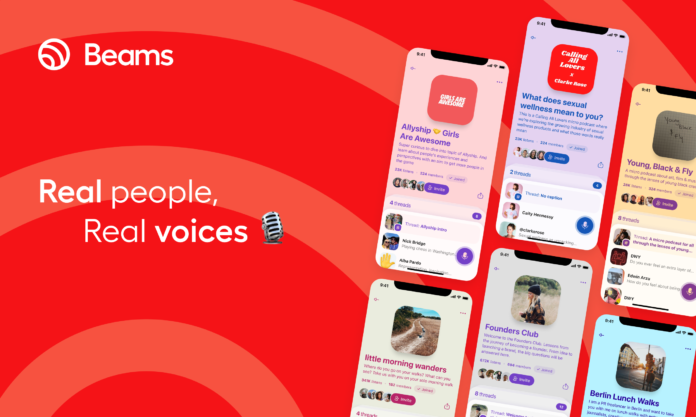 Founded in Berlin in 2020, Beams has announced it has secured an additional €2.5 million, led by US-based TheVentureCity, to complete its seed round to a total of €5 million. The innovative audio-based social media platform is rapidly positioning itself at the forefront of the new social media era, defined by authenticity and connections.

The social media landscape is increasingly being criticized for losing sight of the people and personalities behind the media platforms. Beams was created with the vision to radically transform the social media space, with a social voice app which swaps out ‘likes’ and followers for authentic conversations via short voice notes.

Beams is a space for people to come together and share diverse views on different trends and interests, allowing people to post up to 90 seconds of voice recordings into groups. These groups can be either in-app or on the web, be open to everyone or kept private. The unique format lets you hear voices from the street, drop recorded thoughts and responses in your own time, and find other experts sharing a daily dose of news or observation in an easy-to-consume way.

Founded during the pandemic and in the age of social distance and increased digital connection, the founders wanted to bring people closer together through real, authentic conversations on a social platform that didn’t have the pressure of creating content for popularity and ‘likes’.

The young company is led by former Soundcloud, Spotify, and N26 employees and so the platform is created by the minds who have helped shape some of today’s leading audio and tech products. Previously, the team built digital audio experiences for world-renowned artist JR. These art installations documented more than 3,000 voices telling personal stories presented at San Francisco’s MoMA, New York’s Brooklyn Museum, and a TIME cover story.

WIth such extensive expertise behind Beams, they have so far been able to host more than 5000 topic groups, including groups with thousands of members, since launching earlier this year. Beams is also already going global. Based in Berlin, the fully-remote team functions across Europe, the UK, and the US.

“Today, when divisive content easily goes viral on social media, many people are longing for places that embrace sharing and listening to diverse voices and views.” said co-founder and co-CEO Alan Sternberg. “We designed Beams to make it easier to create and participate in real conversations through a collaborative short audio format. Listening to real people, through real voices, helps all of us better understand what is unfolding around us in society. That’s the magic we already see Beams creating.”