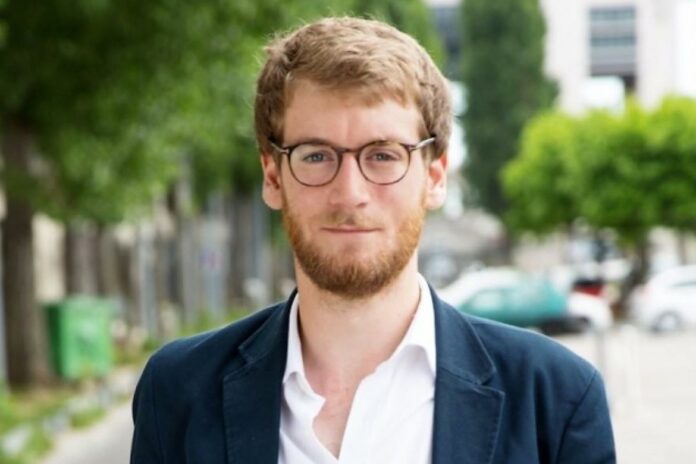 Andjaro was founded by Alexandre Ramin, Benoit Ozan, Ivan de Pontevès and Quentin Guilluy in 2015. Their motivation: to re-balance the management of employees spread across multiple sites. The idea is simple, yet powerful – big corporations can lend employees to other sites of the same group instead of making temporary or fixed-term staff hiring, thus saving costs and improving HR efficiency for organisations.

So far, their platform has clients like Accor Hotels, Groupe Flo and Sodexo, among others, and it has already powered more than 50,000 staff movements within client corporations, with seven digit savings for them.

We had the pleasure of interviewing Quentin Guilluy, one of Andjaro’s founders and asked him about his company, his tips for other founders, Paris’s startup ecosystem and his vision for the HR market.

Andjaro was founded in 2015. How have your objectives and goals changed since the company has grown?

We founded Andjaro with my 3 co-founders to have a positive impact on the job market. We first wanted to uberize temp agencies, thinking technology would bring a new paradigm. I think we were mistaken in our approach, not our goal: Andjaro brings flexibility to large organisations while securising permanent jobs. We are very proud of it.

What first got you into entrepreneurship?

Opportunity! The opportunity to create a solution to the problems of tomorrow’s economy was my entrepreneurial impulse.

Is Andjaro the first company you founded?

Andjaro is the first company that I founded. We matured it for several months before launching the company in August 2015.

What do you think it will be the next major shift in human resources in the next 5 years?

Would you give any advice to first time founders? What about any advice for yourself 10 years ago, knowing what you know today?

Today, France is a leading player in European entrepreneurship and the ecosystem is rich, strong, unified and surprisingly friendly. If I were to give some advice to my peers, it would be to ask more experienced entrepreneurs to discuss the problems they encountered over coffee.

For me, moments like this of knowledge exchange have been decisive. For example, my meeting with Cyril Marschal, founder and CEO of LuckyCart, over a drink on the terrace when I was a young employee, allowed me to go from an idea to a specific project, giving life to Andjaro.

Experienced entrepreneurs have experience of both the glory of starting up, as well as the hard times, which gives them an understanding of a startup’s situation at any given time. Their thought processes, their experiences and their understanding of the ecosystem are therefore precious assets to ask about and move forward. They will not be afraid to expose the weaknesses, interrogations and truths that are the most difficult to hear, because they themselves have gone through this process. It is vital to listen to their advice, as it could lead your startup from failure to success.

Who are your business idols and who inspires you most?

George Mallory is perhaps one of the people I admire most and identify with.

George Mallory was the first man to attempt to reach the summit of Everest. His story is fantastic. It is certainly the greatest mystery in the history of mountaineering. He was last seen some 100 meters from the summit of Everest. What happened next, nobody knows. Except, perhaps, a Kodak Vest Pocket camera, with which he was climbing, waiting desperately for someone to find it.

No one knows if he reached the summit. I find this myth, this sense of effort, this taste of the grand prize absolutely admirable. His taste for the impossible is something I admire a lot.

Do you think that founding a startup is for everybody?

I recently found my high school teacher’s report card. Trust me I was not a special kid, did not go to a well-known school, and do not come from a wealthy family. As far as I am concerned, you do not need to be special to launch a startup. What you need is a very strong drive, not skills.

Which town, city or region in Europe do you believe has yet to be discovered, has its own secret ‘entrepreneur’ sauce, or has a unique environment for aspiring entrepreneurs?

Dunkerque! More seriously, the North of France. It is a region that for many years has been committed to an ambitious policy of developing the initiative and entrepreneurship of its inhabitants through several actions. Furthermore, in 2012, the Nord-Pas-de-Calais Region was the first region to be labelled ‘European Entrepreneurial Region’!

Moreover, Lille is a real strong member of the French startup nation. The home of the French textile industry, Lille has developed its digital substance. The first incubator and accelerator for startups in the sector, EuraTechnologie is the perfect illustration of this sector migration; this center of excellence dedicated to information and communication technologies has invested in two former textile factories. Its strategic position in Europe, less than 80 minutes from Paris, Brussels and London, allows it to take advantage of the dynamism of those three capitals.

You are based in Paris. What is your opinion on the environment for creating a tech company there?

Paris is an accelerator of opportunities. In fact, to accelerate these ‘opportunities’ over the last few years, more than a billion euros have been invested in supporting startups! To encourage the emergence and development of future “unicorns”, Paris offers a wide range of assistance, from financial aid fpr innovative project leaders, to accommodation and support.

Paris’ ecosystem is strong and well connected. I love being an entrepreneur here even though I think France should decentralize its ecosystem a little more.

How did you finance Andjaro up to this point? Do you plan to achieve additional funding in the future?

After raising €5 million in 2018 from Balderton Capital and SAP.io, we just raised €13.4 million in Series B a few weeks ago. This was a new round of founding launched before the current health crisis, led by Idinvest Partners via the MH’Innov fund, joined by the investment company Sofiouest, We Positive Invest, the Arkéa group’s societal innovation fund, as well as funds managed by Alliance Entreprendre and SWEN Capital Partners. This new round of financing will enable us to pursue our business development strategy by targeting new sectors and developing our technology and services in Europe.

What are your plans for international expansion? Which markets are most important for Andjaro and why?

We will look at how the situation will develop in the coming weeks and months. Indeed, plans have changed a bit, as it might be more difficult to cross the borders physically.

Before this health crisis, we had planned to open offices abroad with a more intense pace of deployment. That has fundamentally changed. Today, it is collaboration with our clients that we will set up first, by accompanying them in markets with similar employment constraints, i.e. in Western Europe such as Belgium, Spain, Italy and Germany, which are becoming our priorities.

And finally, what is your long term vision for Andjaro?

We want to impact the job market. We will be happy when the percentage of permanent contracts has increased everywhere that we are implemented.

Share
Facebook
Twitter
WhatsApp
Linkedin
Previous articleScaling your business in the ‘new Europe’ – a cost efficient, effective and low-risk approach (Sponsored)
Next articleHow to build a Minimum Viable Brand Experience for your startup