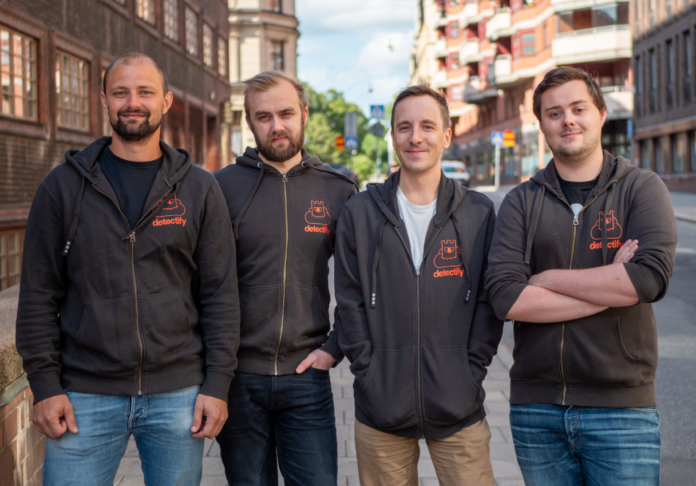 Detectify, a Swedish web application security startup, has today announced its latest financing round of €21.5 million. The series B round was led by venture capital firm Balderton Capital, and supported by existing investors Paua Ventures, Inventure and Insight Partners. The new funding will be used to continue to hire world-class talent to further accelerate the company’s growth and deliver on Detectify’s promise of a safer internet for all.

Detectify was founded in 2012 by a group of elite Swedish ethical hackers who set out to give every company the same level of security as the world’s largest software companies and Government security services. Detectify does this through ‘Detectify Crowdsource,’ an invite-only ethical hacker network. This network allows top-ranked security researchers to submit vulnerabilities which are then built into the Detectify automation platform, combining the best of human ingenuity with machine learning to provide security.

This Detectify Crowdsource network has experienced rapid growth, with the community modules having already found 110,000+ vulnerabilities in Detectify’s customers’ assets in the last eighteen months. The ethical hackers are paid every time their submitted module identifies a vulnerability on a customer’s web apps. As each reported vulnerability could help Detectify secure hundreds of web apps through automation, ethical hackers in the Crowdsource network have a much broader impact than in traditional, manual ‘bug bounty’ programmes, which only benefits a given player.

In the last year, Detectify has expanded its client base in the US, counting cutting-edge software companies such as Trello, Spotify and KING as customers. Additionally, they are particularly focused on building a strong and diverse team; almost half (45%) of the company’s employees are female, including 50% of the C-level, and they have close to 30 nationalities between their Stockholm and Boston offices.

“We are delighted to add Balderton Capital to the group of supporters for our mission. The first conversation with them took place five years ago, so we are thrilled to be partnering with them.The Balderton team is a great match for us as they see an ethical core as a critical element of every great global company,” says Detectify’s CEO Rickard Carlsson.

James Wise, Partner, Balderton Capital, said, “Detectify brings together the power of human ingenuity, the immense scalability of software, and a strong culture of transparency and integrity to provide world-class security to everyone. This is a fundamentally new approach to protecting businesses from new cyber security threats, and alongside our other cyber security investments, including Darktrace, Recorded Future & Tessian, we see Detectify as part of a new wave of solutions to make the web safer for everyone.”

“Partnering with Salesforce was a natural next step”: Interview with Detectify (Sponsored)