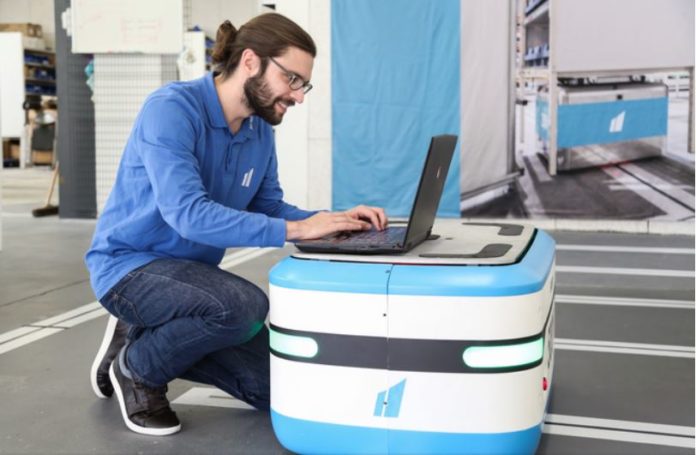 Nanterre-based Scallog is a designer and manufacturer of simple, flexible robotic logistics solutions. The startup has announced it has raised significant funds from Colruyt Group, a leader in large-scale distribution across Belgium, France and Luxembourg, with the group becoming a minority shareholder.

Founded in 2014, the startup aims to widen the use of robots in warehouses and has raised substantial funds from Colruyt Group, a Belgian leader in large-scale distribution. This latest step will allow Scallog to continue investing in R&D and accelerate its international growth, particularly in Europe.

Combined with its commercial success – 30 clients in six countries including L’Oréal, Airbus, Deret and Decathlon – this latest development consolidates Scallog’s commitment to boosting the technological edge it currently has in robotic order preparation, doubling its workforce and pursuing its international growth strategy, particularly in Europe.

According to the ABI Research advisory firm, over four million robots will be up and running in 50,000 warehouses around the world by 2025 – 1,000 times more than in 2018. Spurred on by these figures, Scallog aims to become Europe’s leading mobile warehouse robotics company over the next three years, giving companies ever more order preparation flexibility and efficiency in light of changing consumer demands, seasonal peaks and emerging delivery trends. A ‘Goods to Man’ robotics solution equipped with software intelligence to meet logistical challenges across a range of different sectors. Founded by Olivier Rochet in 2013, Scallog is a startup that designs and manufactures a turnkey ‘Goods to Man’ solution.

The Scallog System features software managed robots tasked with transporting mobile racks to order preparation stations and picking operators: an approach rolled out by Amazon and Alibaba on a large scale. This system primarily aims to allow at least three times as many orders to be prepared per hour, while enabling safer, more efficient use of storage space, removing aisles and reducing difficult working conditions, notably the distance travelled by operators, with an average of 15 kilometers per day and 50% time saved. Scallog System is a relevant, multi-purpose alternative to more traditional, rigid and expensive automated solutions, guaranteeing straightforward set-up, flexibility and scalability, as well as a smart investment.

Scallog has taken the simplicity and agility of mobile robotics and injected it with software intelligence that is a stand-out feature on the market, allowing the technology to adapt to constraints and the specific structures and types of logistical operations (BtoB, BtoC, order preparation, restocking, inventory) rolled out by distribution, industry, online retail and 3PL companies.

Based at its 2,000m2 head office in Nanterre, Scallog’s R&D team is well-versed in all the latest software and hardware technologies and best practices in logistics, backed up by a production unit with capacity to manufacture 1,500 to 2,000 robots per year.

“With Colruyt Group’s backing, Scallog is embarking on a new chapter to secure growth and success,” said Scallog’s founder and CEO Olivier Rochet. “We’re thrilled that a group with Colruyt group’s experience and scale has placed its trust in us, forging a committed partnership while giving us the freedom and independence we need. We’re convinced that the future of warehouses lies in mobile robotics used to benefit humans. And we now have the expertise and resources needed to accelerate our sales growth across Europe.”

This means the Scallog solution is designed, assembled and manufactured from start to finish in France, giving clients better follow-up and super-fast responsiveness, guaranteeing a high-quality service. Funds raised with a distribution group that shares the same core values Scallog has seen double-figure growth for a number of years now, and approached a large-scale distribution leader to seek funding. Colruyt Group shares the same long-term strategy and commitment to efficiency and operational excellence.

“Scallog ticks all the right boxes in terms of what our group aims to support: a flair for innovation at the epicenter of the retail revolution, the agility of a startup, a talented team and a proven international vision on a high-potential market,” said Jef Colruyt, CEO of Colruyt Group. “We’re delighted to be supporting Scallog, a company that’s ready to grow, in fulfilling its ambition to widen the use of robots and develop new uses to benefit humans in a warehouse context in France and throughout Europe.”

This funding will allow Scallog to pursue its R&D investment, build its sales and marketing team with a view to increasing sales, and bolster international growth via offices and partnerships with integrators in Europe, the Middle East, and beyond. Over 30 new employees are set to be recruited within the next 18 months, including success managers and engineers.

Mary Loritz
Mary served as Head of Content at EU-Startups.com from November 2018 until November 2019. She is an experienced journalist and researcher covering tech and business topics.
RELATED ARTICLES
Belgium-Startups