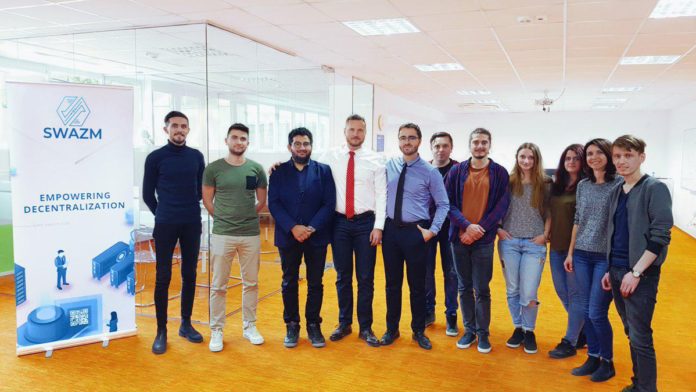 Bucharest-based blockchain startup SWAZM has launched a decentralized architecture to enable the horizontal scaling of distributed applications (DApps) into mainstream usage. The SWAZM infrastructure is capable of supporting millions of users at very high network speed, guaranteeing cheaper, higher performance decentralized storage solution for decentralized applications. The startup has now raised a round of €500k.

The funding came from Armand Domuta, an investor and founder & CEO of Restart Energy. One of SWAZM’s first clients, Restart Energy was so impressed with the technology that the company’s founder decided to invest.

The SWAZM team has developed a powerful and flexible decentralized computing and storage engine, which aims to use any existent unused computing power, storage and bandwidth to serve the needs of real-world financial services businesses and other organizations that want to develop, test build and deploy applications, whether or not they are on the blockchain.

The SWAZM infrastructure is capable of supporting millions of users at a very high network speed – guaranteeing cheaper, higher performance decentralized storage solution for decentralized applications. SWAZM also offers a robust and flexible development ecosystem, all possible due to its unique architecture that combines reliable transfer network, storage capabilities, and compute containers. The software provides certificate authorities, authentication, storage and the scheduling of applications across many CPU cores or clusters.

“2017 was a turning point, when Initial coin offerings (ICO’s) had raised $5.6 billion. A year later, more than half of the upstarts who promised to change the world have failed,” explained Vali Malinoiu, Founder and CEO of SWAZM. “Why? The infrastructure required to sustain these distributed apps did not exist. Our mission was to create an infrastructure that can sustain tens, if not hundreds of millions of users across the globe, with an unheard of data traffic in both quality and quantity, and a working system which can transcend the geographical limitations. All of these have to be executed at an Internet speed the current infrastructure cannot sustain. That is why we built SWAZM.”

“To scale up and into the mainstream, each DApp must perform flawlessly, serving tens, if not hundreds of millions of users at the same time, while also keeping the highest standards of security, network speed, and version control,” added Malinoiu. “This puts an immense pressure on the infrastructure, which can lead to unsustainable costs hikes, drops in performance, and eventually failure in scaling. At SWAZM, we have  designed a turnkey architecture that helps companies deploy, manage and scale up their decentralized applications.”

The current cloud model for hosting and file storage services is not optimized for the particular demands of decentralized apps. SWAZM offers a solution to go beyond the cloud, bypassing the technological bottlenecks by putting to good use the vast amount of unused computing, storage, and bandwidth resources, creating a unique marketplace for computing resources in the process.  SWAZM addresses the needs of big scale applications by offering microservice support to divide the workload across multiple CPUs (Central Processing Units) or clusters of CPUs.

With SWAZM, businesses and developers now have the flexibility to enhance their applications with new features, or to deploy fixes on the fly, while managing the access to specific areas of the development ecosystem. The SWAZM team addresses this need by offering a robust versioning system with the possibility to add or revoke access certificates, enabling more versatility in connection to ephemeral contractors working on the DApp.