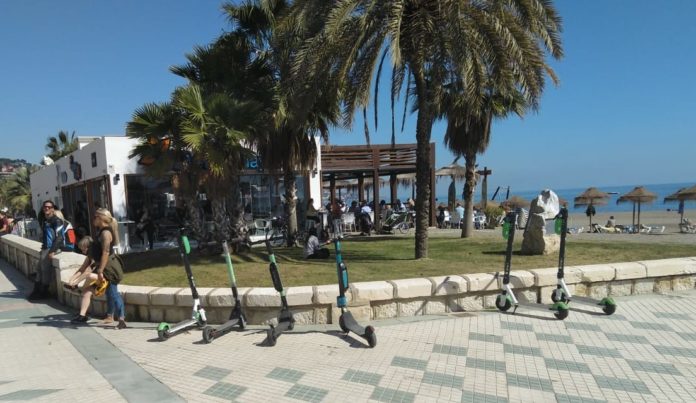 After rolling out in the US in early 2018, e-scooters began sweeping across European cities last autumn, including my sunny beach city of Málaga, Spain. It’s the perfect place to ride a scooter, with year long warm weather and wide promenades along the seaside. Lime appeared first in November, followed by TIER, VOI, Wind, UFO, Eskay, Bird, and now Movo.

Eight scooter companies have now set up shop here, littering the sidewalks until a couple of weeks ago, when an ordinance went into effect prohibiting scooters from being parked on sidewalks under penalty of a €200 fine. (Which has made the scooters much less accessible, as operators are only dropping them at designated points in the city.) From the comments in the newspapers, one can see that their appearance is controversial – with mainly non-users complaining that they’re dangerous, interfere with pedestrians and cars, or that there are just too many of them.

Having covered funding rounds for the German e-scooter startup Wind, and Sweden’s VOI for EU-Startups, I knew what they were I first saw them docked on the sidewalk in early November. I was excited to take my first ride, but the experience was actually extremely frustrating.

The first two scooters I scanned wouldn’t unlock. After 20 minutes, I finally unlocked the third one. The short ride home was a little scary. The steering isn’t as agile as that of a car (in fact it’s a bit clumsy), and going over bumpy sidewalks and mixed terrain was unsettling. When I got home, I spent another 10 minutes trying to lock the scooter – while the meter was running, of course. By that time I was angry and hungry – I would have saved 20 minutes just walking home. Unable to park my scooter at home to make myself dinner, I kept riding to the city centre, finally locked the scooter, and gave Lime some very severe feedback and one star. After a few bad reviews, I noticed that the problems began to disappear; yet I’ve had similar experiences trying to lock and unlock almost every other e-scooter brand I’ve tried. (I recommend that all of the companies ask for feedback after the ride so they can improve the app).

Despite my frustrations, and even though my city has pretty great public transit, I keep riding them. They’re kind of fun, even when dodging cars and bikes and almost crashing, and since they’re everywhere now, they’re convenient.

Given the pros and cons, I’m on the fence about about e-scooters. Are they an ideal mobility solution for cities, or are they a nuisance, and more trouble than they’re worth? Should I break up with e-scooters? When making important life decisions like this, you want to see if the positives outweigh the negatives.

So here are 10 things to love and hate about e-scooters that you should consider if you’re about to take one out for a spin, or riding for the first time:

The open air. No more claustrophobia! Buses are great when there’s a seat available and you can chill out and read on your phone, but there are few things I hate more than standing on a crowded bus as it stops and goes, trying not to fall into the person beside me. On an e-scooter, I’m free as a bird. I can go up to 28 km/hr while enjoying the wind on my face and the sea view. Another bonus here is that e-scooters can reduce congestion on public transit.

Convenience. I can scan e-scooters with my phone and jump on anywhere, and jump off anywhere. While I have great access to public transit – the bus stop is one minute from my home, and will take me directly to the city centre – in the cashless era, finding the change to hop on is sometimes a challenge. And if I want to reload my bus card, I have to go all the way to the state run tobacco shop, which is of course closed between 14:00 to 17:00 for siesta.

They also take you right where you need to go – so if you’re in a hurry and can’t wait for the bus, not to mention the transfer to the next bus or metro station, e-scooters are the way to go. You don’t have to wait behind traffic or stop at every bus stop, making the average journey quicker than riding on city buses, depending on the terrain.

They’re fun. On an e-scooter, I can watch the sea as I glide along the boardwalk and feel the wind against my hair. I haven’t driven a car for six years, so steering something that glides effortlessly a little too fast gives me a thrill that feels like flying. But I’ve learned you shouldn’t drive an e-scooter like a car – there are way more obstacles and changes in terrain to look out for when navigating them, so you have to stay vigilant (and definitely don’t try a u-turn – they don’t work like that).

They’re ecofriendly. While e-scooters aren’t completely emissions free as they claim, since they still need to be charged using electricity which may or may not be generated by renewable sources, they only use about 1-2% of the CO2 generated by a car going the same distance, as demonstrated by this graph. 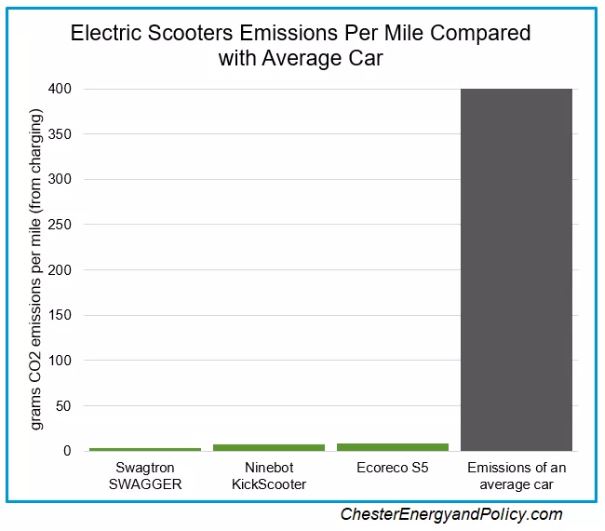 However you also have to take into account that e-scooters are typically transported by vans to charging stations each night, and the additional carbon emissions from this transport is demonstrated by the graph below. Though some e-scooter brands, like WIND, are using replaceable batteries in their scooters so that they don’t need to be collected at night and charged externally, reducing emissions. 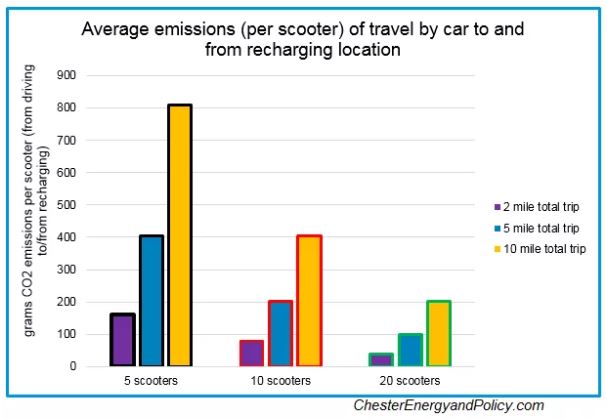 As you can see, if only five scooters are transported ten miles to a charging site, their carbon footprint becomes comparable to that of cars. However even with transport, in the grand scheme of things e-scooters present a much greener mobility option than cars.

Their potential to replace cars. While some residents may complain that e-scooters go too fast, clutter sidewalks, or cause accidents, they’re a fraction of the size of cars, they’re quiet, and as just mentioned, they’re eco-friendly. I never ride e-scooters on the roads, as it seems far too dangerous, and I haven’t seen anyone else do so either. But if e-scooters could replace cars on the road, that would not only make them safer, but create a real mobility revolution. 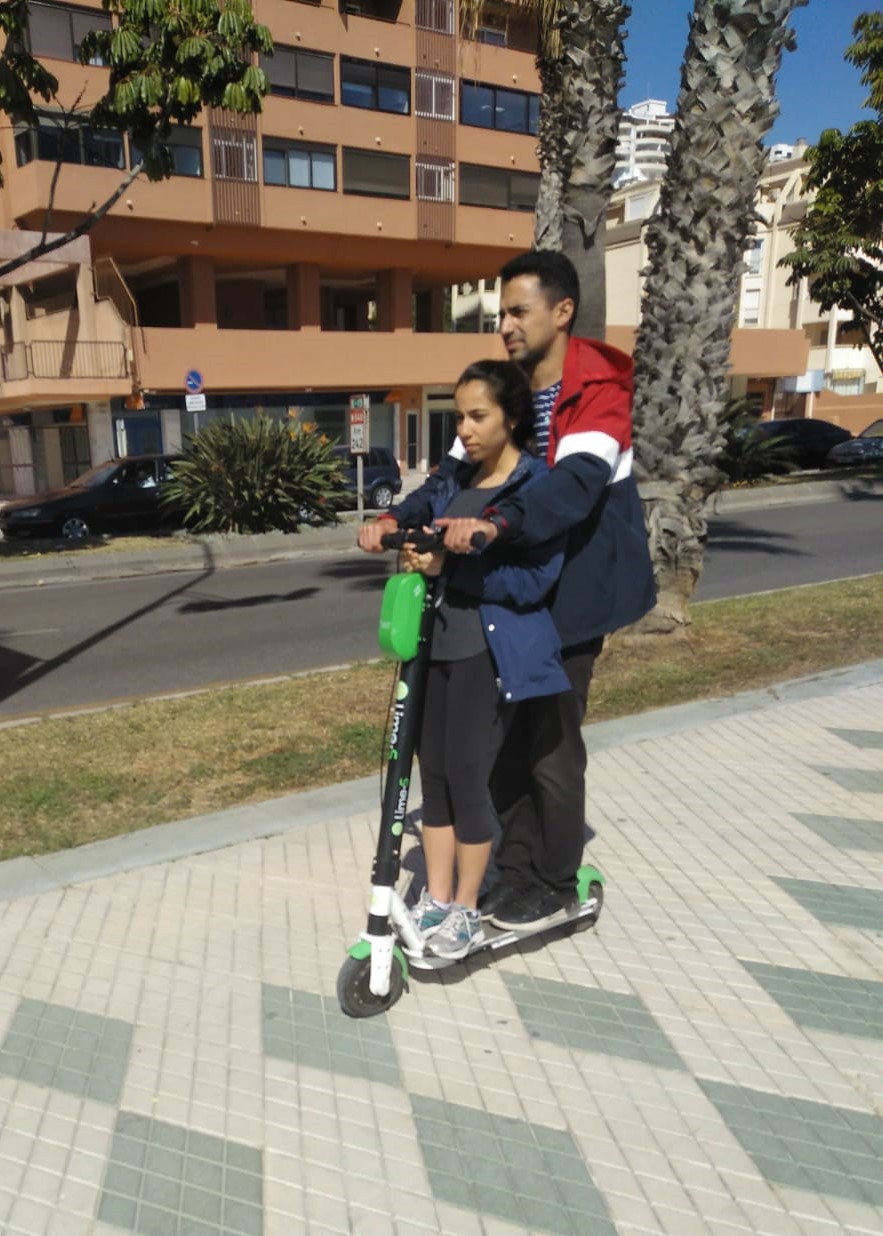 taking risks – because between bumpy surfaces, faulty brakes, and swerving between pedestrians, baby strollers, bikes, and cars, I’ve almost fallen or crashed into something almost every time I’ve ridden an e-scooter. I’ve never once seen a scooter rider wear a helmet, as the companies “require”. Not to mention all of the people you see doubling up on e-scooters, especially with children, which seems extra dangerous. And you really want to avoid rain. Though *possible* to ride in the rain, you’ll want to avoid fancy tricks, like for instance, turning. (I double checked this one just to make sure it wasn’t safe, and I almost fell three times.) The statistics are with me on this: according to Consumer Reports, e-scooters have caused at least 1,500 injuries in the US in the past year.

The apps don’t work right. This is perhaps the most frustrating aspect of e-scooters. As I previously mentioned, I have more than once spent over 30 minutes trying to unlock and/or lock an e-scooter. In that time, I could have walked! Imagine: I’ve now lost 30 minutes of my day, a little quality exercise, and maybe a couple of euros that they charged me while I was trying to lock it. Sometimes I think it’s just a glitch, and sometimes I feel like they’re intentionally trying to scam me with their slow apps by keeping the meter going.

They’re unhealthy. E-scooters have not only replaced buses – they’ve also replaced walking. That “last mile” transport used to be my only exercise. Walking is great time to get sunshine, relax, listen to music or podcasts, take in the environment around you, and quietly reflect on your day. Though when I’m in a hurry I’ll opt for an e-scooter, when I have time I opt to save the €2-3 and walk to my destination.

They’re expensive. Because I’m using an app and not cash like I do for the bus, I don’t *feel* like I’m paying anything when I use an e-scooter – but in reality they’re about twice the cost of the bus, and between getting caught behind pedestrians or waiting to cross the street, they’re not always much faster. And in some cases, they’re not even much cheaper than a taxi.

They’re exclusive. Though a preferred mobility choice for tourists and families going out to enjoy the outdoors on weekends, e-scooters aren’t an accessible option for everyone. Specifically, cashless options tend to exclude the poor – my friends without smartphones or debit cards can’t use them, and even if they had these things which many of us consider essentials, e-scooters would be an expensive option for them, at least relative to walking or taking public transit.

In sum, e-scooters can be a fun way to get around, and are convenient if you’re in a hurry, but you need to be extra cautious with this form of mobility, as there is nothing between you and the concrete. They’re definitely a greener, cheaper alternative to cars that can reduce congestion on the roads and carbon emissions. But public transit remains the more economical option, and if you have the time, I recommend that you enjoy the weather and your neighbourhood and go for a good, old-fashioned walk.

“Confidence is critical to keep going”: Interview with Sam Ryan, Co-Founder and CEO at Zeelo