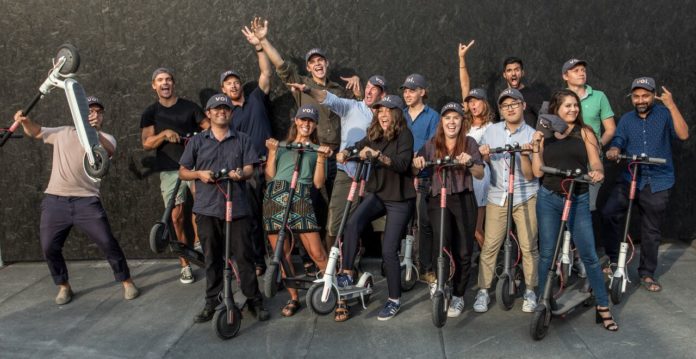 Just founded in August 2018, the Stockholm-based e-scooter startup VOI has already expanded into 14 cities, including Paris, Madrid, and Lisbon. Today, the e-scooters are due to appear on the streets of Oslo, and later this month it will launch in Helsinki. In only seven months, the company has built a base of over 400k riders, who have so far cumulatively travelled over a 1.5 million kilometres – the equivalent of 37 times around the globe.

Now, after raising a €44 million Series A round last November to expand across Europe, the urban mobility startup has raised another €26 million to acclerate its expansion. The funding came from existing investors Vostok New Ventures, Balderton Capital, LocalGlobe and Raine Ventures, alongside new investors Project A and Creandum, and a host of business angels.

Riders can use Voi scooters by downloading the app to locate a nearby scooter on the street or by using a map, pressing the ‘ride’ button, and scanning the VOI QR code. There’s a €1 unlocking fee and a ride costs €0.15 per minute.

VOI has built a stronghold in the Nordic cities of Stockholm, Gothenburg, Malmö, Lund, Uppsala and Copenhagen – most of which the company expects will reach profitability in Q1 based on strong user traction – and is also live in Paris, Lyon, Madrid, Malaga, Zaragoza, Murcia, Lisbon and Faro.

The startup has been working collaboratively with city authorities across the continent and pioneering many industry firsts, including a Code of Conduct in Stockholm to help the city’s multiple scooter-sharing operators work more safely and efficiently together.

The startup’s approach to growth is “distinctively Scandinavian – based on dialogue, transparency, and sustainability,” said VOI’s CEO Fredrik Hjelm.

“Asking permission before we enter new towns and cities means we can work with the authorities on the ground to offer not only a viable alternative to cars, but also help people to combine their e-scooter journeys with the existing public transport network to make moving around as seamless as possible. This latest investment means we can take that approach to a range of new cities, while continuing to invest heavily in our product, technology and team,” added Hjelm.

The latest round of investment will enable the startup to continue to expand into new cities in Italy, Germany, Norway and France. VOI, which builds its own tech end-to-end, will also double-down on R&D, including the development of new vehicles, and further enhance its products and team. The company already includes hires from Spotify, Uber, Bird, BCG, Avito, Budbee, Glovo, Cabify and many other top brands.

“We’re based in Stockholm and travel frequently across Europe, so we were in perfect position to see firsthand just how quickly Voi has established themselves,” said Johan Brenner, General Partner at Creandum. “We believe very strongly that the European market leader will be the one that is the most successful in working with local municipalities and the Voi team continues to lead the pack.”