Here are the regional winners of Nordic Startup Awards 2018 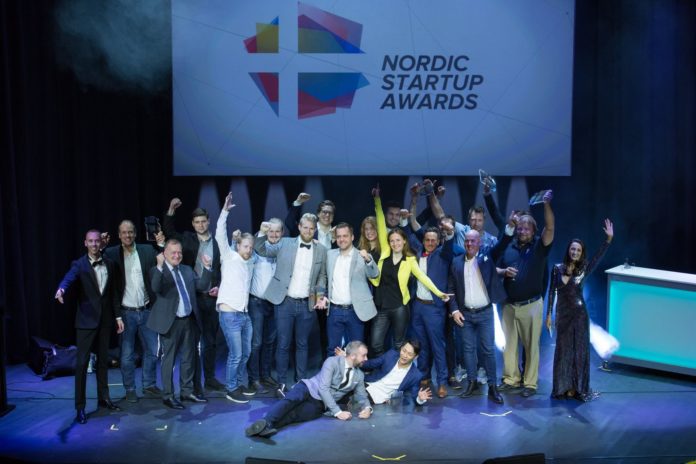 The Grand Finale of the leading competition for the startup ecosystem of the Nordics took place this evening in the beautiful Østre Gasværk Theatre in Copenhagen, Denmark.

The event had an impressive lineup with some of the best players of the startup ecosystems from the five participating countries (Denmark, Finland, Iceland, Norway and Sweden). Before today’s Grand Finale, more than 2.500 nominees were going through a rigorous judging process in their home countries to win the national round. The winners from these rounds were then further ranked by an international jury, and their decision was eventually combined with over 35.000 individual public votes from each of the five Nordic countries.

The Grand Finale event was hosted by Global Startup Awards together with the regional partner WeLoveStartups.

“All countries have presented high quality candidates and there is a good balance between B2B and B2C companies, also characterised by being extremely scalable.” – Kim Balle, CEO of Global Startup Awards

Denmark, Norway, and Finland won four awards each, while Sweden got three, and Iceland got one. (Which means Iceland is again the ultimate winner – per capita) 🙂 As few of these winners will have the chance to compete globally with the winners of some of the categories from other regions of Global Startup Awards in 2019.

Templafy is a cloud-based, Enterprise-grade SaaS document template and digital asset management platform. With Templafy, global businesses safeguard their brand integrity and increase productivity through a centrally governed, secure and easy to use platform. Founded in Copenhagen, Denmark in 2014, Templafy’s team leveraged more than 15 years of experience in template management and document automation to develop an enterprise cloud service solution which is now a global market leader within its category, validated by blue-chip enterprise customers on every continent.

Jan Erik Solem is the co-founder and CEO of Mapillary, the street-level imagery platform that uses computer vision to extract map data at scale. Jan Erik is a computer vision specialist and a former maths professor, and has authored several books on computer vision. Prior to co-founding Mapillary, Jan Erik built and exited a computer vision company to Apple, where he then spent several years leading a computer vision team. Jan Erik is also an angel investor, a founding member of Lund University Fund for Open Source Software, and an avid cyclist. He lives in Malmö, Sweden, with his wife and three children. Mapillary was also the national winner of the Best AI/Machine Learning Startup in Sweden.

Hampus co-founded two companies (TAT – acquired by Blackberry, Briskio – fold), and three organizations to help startup (MalmoStartups, FastTrack, and The Ground). In total, he has done 85 investment, with 80% in Europe.

Varjo Technologies is creating the world’s best hardware and software for groundbreaking VR/AR/MR computing devices, merging the real and digital worlds seamlessly together in cinematic quality. The mixed reality experiences they are creating will empower each of us to be more creative and more productive. When they’re done, computers will look nothing like they do right now.

Corti has built an AI-based assistant that helps emergency service call-takers (112, 911 etc) better diagnose patients. Like a dispatcher, Corti analyzes everything a caller says and shares. The data is sent through layers of artiﬁcial neural networks in real-time. As an emergency call proceeds Corti looks for patterns in the call data to help the human dispatcher be more thorough and efﬁcient, never missing a single clue.

Vainu was officially launched in August 2014 with a mission to collect, read, and understand all the information ever written about every company in the world, and then make this information comprehensible to everyone. Now four years later Vainu is nearing 1M MRR, 200 employees and over 100 million companies in its AI-driven database.

Karma is a social enterprise dedicated to battling one of the world’s largest climate issues: food waste. With the Karma app, restaurants and grocery stores can sell their surplus food to consumers at a lower price. The strength of the Karma solution is that everyone benefits from taking sustainable action; consumers eat great food while saving money, and businesses receive an additional revenue stream — all while saving the environment. It’s a win-win-win!

A financial technology company founded in Finland in 2012, Invesdor operates an online investment platform that connects ambitious European growth companies with investors worldwide. Invesdor has helped raise more than 60 million euros for more than 120 businesses. Its clients include private and publicly traded companies from Finland, Sweden, Norway, Denmark and the UK as well as investors from more than 70 countries. Invesdor has offices in Helsinki and Stockholm.

Saga Robotics provides farming as a service using fully autonomous field robots. The robots are self-driving and operate day and night, performing different tasks in the field. A wide variety of tools are being developed and tested, such as robotic harvesters for strawberries, cutting tools for forage production, UV treatment against mildew, and data collection and prediction.

657 Oslo is Norway’s largest coworking space for creative industries. The 657 OSLO team believes that collaboration is the new competition. They accelerate passionate people and ignite great ideas. 657 OSLO offers an ambitious community and an inspiring place to work for freelancers, entrepreneurs, small businesses and startups. At the moment, they are home to 225+ talented individuals representing more than 110 exciting companies spread across 2 buildings at Fredensborgveien 24 in Oslo. In addition to desks and offices, 657 OSLO has a wide array of meeting rooms, event spaces and studios, perfect for meetings, seminars or conferences with up to 80 guests, brainstorming workshops requiring different breakout spaces, or a party.

Accelerace is one of the world’s top 10 seed accelerators. Since 2008, Accelerace has spotted, trained and invested in more than 500 of the most promising Danish and international startups and growth companies. 88% of the companies are still on the market today. As part of the national Scale-up Denmark initiative Accelerace is scaling up startups within tech, food tech, cleantech, life sciences and welfare technologies through guidance and mentoring from skilled serial entrepreneurs, camps and network. Accelerace has invested in more than 69 promising startups, who have been through the Accelerace program and have started partnerships with Maersk, Novo Nordisk Foundation, Arla, Foss, Ørsted, Danfoss, Nordea, Bang & Olufsen, Enel, Coop Denmark, Elia and many more.

Sissel Hansen is the founder of the book series Startup Guide, often described as the Lonely Planet for entrepreneurs, and Startup Everywhere, a global platform for entrepreneurs. She created her first startup business when she was 19 years old. It failed, and in 2012 she moved to Berlin, wondering how to avoid making the same entrepreneurial mistakes and how to gather the information she needed to create a successful business in a new city. Over the next two years, she launched several small businesses to help provide knowledge and inspiration to young entrepreneurs. This was the seed of the Startup Guide – a guide to the local startup scene. Today, the Startup Guide is available for 20 cities, with 10 more in the works. In 2017 and 2018 we recognised Sissel also as one of Europe’s most influential women in the startup and venture capital space.

Thorbjorg was also a finalist in the regional finale of the Nordic Startup Awards as Founder of the Year. Her startup Kara connects clients with virtual professionals, in healthcare, education and beyond. For clients, Kara is a place for secure and friendly video conferencing.

An entrepreneurial artist from the creative industry that has shown the greatest development within growth, impact, and innovation over the last 12 months.

“In 2010 I got an idea to create my very own superhero who I called The Urban Legend when I was in Botswana, South Africa and several other countries. I wanted my superhero to be the first global black superhero, that could inspire kids from all over the world and especially Africa, because there is a lack of good role models coming from there. He is a superhero who fights against evilness and oppression, he gives the poor, the forgotten and those who can’t stand for themselves a voice.”

The Urban Legend is available in 12 different languages and its part of school curriculum in Norway, Kenya and Eritrea.

A migrant or refugee startup founder in the technology field who has shown notable achievements over the last year in the Nordic region and acts as a role model for their own community. Originally from the Democratic Republic of Congo, Mukuta grew up in Malawi, before going to Norway in 2005 with his family as quota refugees at the age of 18. Today, he is the CEO of VipiCash, which cuts out the middle and misuse of remittance and donations using blockchain.

Stay up to date regarding startup competitions, tech events and funding opportunities. Make sure to subscribe to our weekly newsletter now!