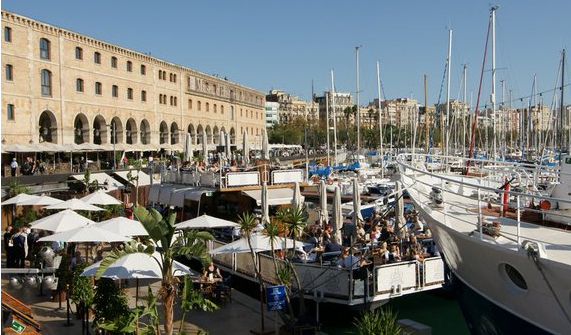 After two years of work and €3.5 million spent on building and remodeling, the Pier 01 building just opened its doors in the Palau del Mar, in the port of Barcelona. It’s a building of 10,000 square meters, just few meters from Barceloneta beach, that will be the new house of around 1,000 workers, comprehending about 70 startups, as well as incubators, accelerators and the Barcelona Tech City, the city’s association of companies and startups working in digital, tech business and ecommerce, that now counts about 230 members representing more than 300 companies.

Barcelona Tech City’s CEO, Miquel Marti, explained to Barcinno that they called it Pier 01 “because of how a pier is where the boats arrives and gets shelter, and that what we’re doing for Barcelona startups, giving shelter,” saying also that the 01 could mean that will be other building like this could may arise in the city. “It’s the most traditional Barcelona history together with the latest in design, dynamism and entrepreneurship” added Marti, explaining that the space will be used also for meetups, workshops and conferences. There will be also room for a coworking space, which are already around 300 in the city, but that are in continuous request.

LetGo, Tiendeo and Holaluz are the first startups to join the new tech cluster, having already moved their activity to Pier 01, but 101Startups, Byhours, Conector, Ikomobim, Napptilus, Geenapp and mVentures, which is part of Mobile World Capital, already confirmed their presence and well, with many more to move in shortly.

While it’s probably non-sense, to make a comparison with Silicon Valley, it’s a fact that the digital ecosystem has growth pretty well in the last few years, considering big success like for the Barcelona’s based Kantox, a P2P foreign exchange platform, that last September surpassed the $2billion in total transaction through their platform, and which has raised already more than $20 millions in investments. But it’s also worth to few big exits like the one of the fashion ecommerce site Privalia that has been bought in April this year by the Paris based Vente-Privee for around $560M.

Barcelona is a wonderful and vibrant city overlooking the Mediterranean Sea, with an easy going cosmopolitan attitude and a great climate, nicely organized locally but also well connected with the rest of Europe and of the world, it has all the characteristics to attract entrepreneurs and talent. It’s already one of Europe’s biggest startup hubs, but by building a strong infrastructure where startups can easily bloom and grow, with ambitious plans and investments like this, it could aspire to become even more central on a global scale.