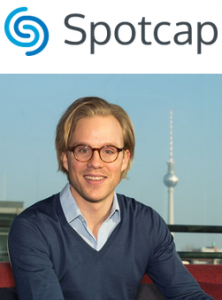 We recently had the chance to interview Toby Triebel, the Co-Founder and CEO of Spotcap.

Founded in 2014, Spotcap is offerering online credit lines to small companies. We recently mentioned Spotcap, which is headquartered in Berlin, as one of the hottest European fintech startups in 2015. Supported by Rocket Internet, Spotcap so far raised about €13 million in venture capital and about €5 million in debt financing.

We spoke with Toby to learn how he and his team built and launched a fintech startup in 3 countries and across 2 continents within just a few months.

Toby, what is Spotcap, can you give us a brief introduction?

Spotcap is an online lending platform for micro, small, and medium-sized companies. We have developed proprietary technology to reduce the credit application process to only a few minutes and make credit decisions very quickly (within 24 hours). Our credit decision process is supported by a set of risk assessment algorithms using large amounts of real time data. Where banks look at historical financials going back five years, Spotcap is more focused on real time performance over the last 12 months. Consequently we can offer very competitive lending products, which are extremely fast to acquire.

In which countries / markets is Spotcap currently operating in?

We are headquartered in Berlin, but we went live in September 2014 in Spain and kicked off our global rollout with our launch in the Netherlands and Australia earlier this year. Currently we are scouting new locations in Europe, Asia Pacific and the Americas.

Headquartered in Berlin with a German CEO – what led to the decision not to launch in Germany but to start with Spain, the Netherlands and Australia?

We are trying to fill a gap in the market by providing loans to small businesses that are underserved by traditional banks. Australia is a good example; SMEs employ around 7 million Australians and make a significant contribution to the creation of new jobs. However, banks often don’t have the capacity and don’t want to serve these companies because they are too young, too small or have a lack of credit history. Consequently Australian SMEs face tremendous challenges in accessing capital to grow. The situation
is similar in Spain and the Netherlands. Compared to these countries, Germany is overbanked and the financing need for small businesses is less prevalent.

How did you come up with the idea to start Spotcap?

Having worked in the finance industry for many years, I witnessed first-hand how smaller businesses struggle to receive funding from traditional banks. Banks have been and continue to deleverage their balance sheets globally, thus effectively shrinking their loan portfolios. My partner Jens Woloszczak and I founded Spotcap to use technology to enable small businesses to grow without having to worry about financing.

How did you finance your fintech startup?

Over the past months we raised 18 million euros in equity and debt funding from a group of investors, including Rocket Internet, Access Industries, Holtzbrinck Ventures, and Kreos Capital.

What was Rocket Internet’s role as an incubator in the development of your company?

Rocket Internet is one of the world’s largest venture capital firms and startup incubators. Rocket serves as an investor, provides capital, strategic advic

e, and infrastructure. Rocket is well known for its ability to accelerate expansion and business growth of its companies; the speed at which we have grown has been incredible.

What are the key advantages of launching a company with an incubator?

Rocket’s global network of companies is certainly the most important key advantage. Be it the expansion to a new market, the introduction of a new product, or specific marketing questions, there’s always someone you can call.

Especially at the beginning it’s a great competitive advantage towards other young companies to tap into the incubator’s wide pool of knowledge. With resources in form of office spaces, colleagues and networks you can fully focus on the development of your product offering right from the beginning.

What was the biggest challenge in your first year of operation?

Finding and recruiting strong talent is never easy. A startup environment is not for everyone but we are really lucky to have built an exceptional team. Our offices are filled with talent from all over the world who have the skills, commitment, and capabilities to deliver exceptional output.

Is fintech complementing or taking the place of the traditional banking industry?