Truecaller, a Stockholm-based company which helps people take the right call, today announced that an investor group led by Atomico, Kleiner Perkins Caufield & Byers (KPCB) and Sequoia Capital has invested $60 million in the business. This Series C round of financing will be used to fuel product development, hire new talent and expand the company’s global footprint.

Founded in 2009, Truecaller today counts more than 85 million users who utilize the service to search contact numbers, block spam and identify incoming calls to their mobile phones. In today’s world of connected devices and social networks, Truecaller delivers an experience that goes beyond the limitations of today’s phonebook apps so that people always have access to the right information, people and businesses they need. Over the past year, the company has also forged key partnerships with Yelp and Twitter to extend even greater value of the service to its users. This includes being able to verify information on businesses that call your phone, as well as Tweet back to missed calls.

Niklas Zennström of Atomico stated: “It is great to see a team from Sweden that’s re-thinking how we communicate and scaling their technology globally. We look forward to working with the team to help them reach the next 100 million users,”

With over 200.000 new users joining daily, the company is seeing a tremendous growth in emerging markets like India, the Middle East, Brazil and Africa. In addition to its growing 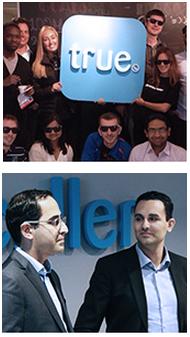 “We started by helping people manage their contact information and block spam calls, but this is just the beginning of what we can do for our users,” said Truecaller co-founder and CEO Alan Mamedi. “We are committed to perfecting the Truecaller experience, and believe that intelligent and predictive services will be the future of the contact management experience.”

Today’s Series C funding round follows an $18.8 million dollar investment in the company led by Sequoia Capital in February of this year, bringing the total investment in the company to more than $80 million. To take part in Truecaller’s growing community, you can download the free app on popular platforms including iOS, Android, Windows Phone, BlackBerry and Nokia feature phones.