The European Web Entrepreneur of the Year awards 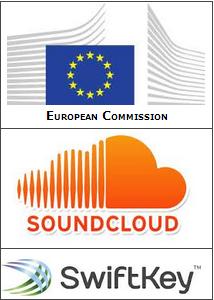 Europe’s best digital entrepreneurs are under the spotlight tonight with the presentation of the “Europioneer awards” in Amsterdam. Alexander Ljung & Eric Wahlforss of the Berlin-based “social sound platform” SoundCloud are European Entrepreneurs of the Year. Jon Reynolds of the London-based company SwiftKey is now holding the title “Young European Entrepreneur of the Year” (under 30 years).

The European Commission sponsors the awards as part of Startup Europe, the Commission’s six-part plan to accelerate, connect and celebrate local entrepreneurship ecosystems in Europe, so that tech start-ups not only start in Europe, but stay in Europe.

On congratulating the Europioneer winners, Commission Vice-President Neelie Kroes said: “SoundCloud and SwiftKey destroy the myth that all good ideas start and end in Silicon Valley. These companies have great futures in Europe, and they show us that it’s sexy and enriching to be your own boss, to create your own job.”

The Europioneer awards are a partnership between the European Commission and The Next Web. 908 nominations were received from across Europe. The winners were selected by a distinguished panel of judges from Europe’s tech and startup community. The other finalists in the Europioneer Awards were:

European Tech Entrepreneur of the Year

Young European Tech Entrepreneur of the Year (30 and under)