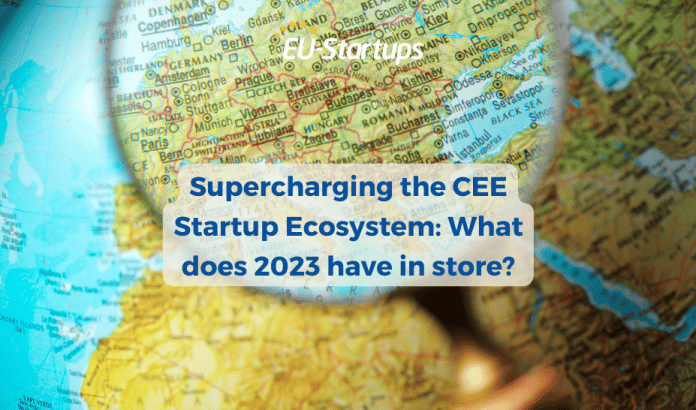 CEE is one of the fastest-growing regions for VC funding in Europe, and according to Dealroom data funding activity in this region has been growing 7.6x since 2017. Further, the combined enterprise value of CEE startups has quadrupled in the past five years – so the region is clearly onto something. The region is also bumping the current trend, with average startup funding continuing o to grow despite a global downturn.

Not only is the region attracting healthy investment – but it’s also incredibly lean at it, and is amongst the most efficient creators of value across the continent. 2021 and 2022 have been the strongest years for unicorn creation in CEE, producing 36 and 44+ respectively, more than doubling the number of unicorns since December 2020.

So just why has the CEE region become so successful?

The region benefits from a number of features that are useful in building a healthy startup and entrepreneurial ecosystems. It’s a region that has well-consolidated infrastructure, benefits from a highly-developed tech talent pool, there is a well-renowned quality of life, and, with high levels of English and favourable conditions for foreign investors, it’s an attractive place for VC firms and entrepreneurs alike to set up roots.

It’s also a region that can be characterized by resilience – and we all know this is a quality that could make the difference as we head into 2023 and fairly unchartered waters.

The entire region can share its own story of resilience – many having had to overcome historical challenges and many having to work to prove their place in the European Union. But there’s one country that stands out in particular – Ukraine.

Despite literally dealing with war zones, Ukrainian startups have still shown growth over the past year, with enterprise value growing 3.3x since 20020. The nation is now home to over 1500 startups, and, over the past year, different collaborations and initiatives have really highlighted just how strong and supportive the ecosystem is. You can find out about some of these here and here XX.

Market One Capital, a VC fund focused on the CEE region, released a new €80 million fund in October this year. The early-stage VC fund, which was founded in 2017, invests into marketplaces, digital platforms and SaaS startups. So far, it has invested into 60+ early-stage tech startups (the majority of them being platforms or SaaS), including Docplanner, Brainly, Tier Mobility, Packhelp and Genial.ly

We sat down with Michał Mroczkowski, Principal at Market One Capital to see what we can expect to come for the year ahead.

2022 had some challenges. How did this play out for CEE?

2022 was certainly a volatile year for startups in CEE. War in Ukraine lowered interest and pushed back not only the growth of VC investments in the region but also FDI in general. We’ll be able to quantify better the scale of the phenomenon in 2023. To make matters worse, it wasn’t the only turbulence in the market. Crypto crashed two times (Luna, FTX). Public markets slash valuations preparing for recession that might burst for good in 2023 as we don’t see yet effects of an inflationary environment or next wave of limited bandwidth of supply chains.

What signs of growth did you see?

CEE is continuously growing faster than Western Europe (Real GDP) and is catching up with penetration of digital infrastructure within local economies. In the last years, the region produced the next class of unicorns which hopefully sooner than later will spin off the next gen of entrepreneurs that saw first-hand how high-growth companies are developed. This new gen should not only be supported by VCs’ euros but also by structural, long-term initiatives

For CEE to be as interesting investment destination as other markets in Western Europe, we should focus on making transactional barriers as low as possible (take a look at Estonia), increase R&D spending (still very low compared to WE) and make some serious bets in how next generations of innovators are educated.

Should founders be worried?

Freshly-baked founders should not fear the new reality though. There’s the same investment interest in the early stage as it was a year ago. On top of that, many VCs in CEE raised new editions of their funds, including Market One Capital, which will be deployed in the next couple of years. Founders of new businesses should be prepared that they need to deliver much more to raise another round though. Later-stage investors are looking much more closely at public markets benchmarks, as they were hit more significantly in the last couple of quarters.

What were the biggest growth areas in 2022?

2022 also brought many significant rounds led by top tier VCs to the region. From my point of view, it was most visible in two segments: fintech and crypto. In crypto we saw significant capital increases in Ramp (PL), Ready Player Me (EE), NFTPort (EE) or Tenderly (SRB). Fintech space was even more dense with Series A+ rounds including Kevin (EE), Montonio (EE), SEON (HU), Payhawk (BGR), Fonoa (HRV), Symmetrical (PL)* or Nethone (PL) being acquired by Mangopay.

At MOC we continue to firmly believe and bet on B2B marketplaces. Given the sheer size of B2B markets vs B2C markets, we see that the CEE region might be enough to produce a unicorn and maybe even decacorn in the next couple of years.

Share
Facebook
Twitter
WhatsApp
Linkedin
Previous article
10 innovative social impact startups to watch in 2023 and beyond
Next article
Raising funds for a B2B SaaS startup: What’s it really like? An interview with Niclas Mollin, Founder of Occtoo