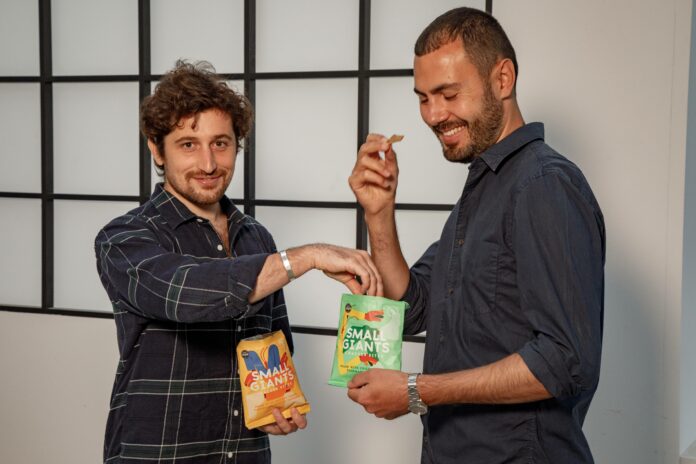 British foodtech startup Small Giants has announced today a new round of funding, totalling around €470K. The startup, founded by Francesco Majno and Edoardo Imparato, has far exceeded its initial target of around €295K. A sizeable proportion of the investment came from shareholders and partners of iN3 Ventures’ network, an innovation advisory and corporate venture capital company.

Founded in 2017, Small Giants is a pioneer in the development of insect-based food products, producing three different flavours of crackers, made using 15% cricket flour. Two of the three flavours – turmeric & smoked paprika, and rosemary & thyme – were each awarded one star in the 2020 Great Taste Awards.

The startup’s main goal is to change perceptions around the world, bringing insect-based snacks to the mainstream. Its latest investment round will contribute to realising this goal, in developing new products and supporting the company’s expansion both in the UK and Europe as a whole.

The startup states that market projections show a CAGR of over 130% over the next five years for the insect sector. The strong growth will also be strengthened by the approval for food use of various insect species by the European Union, which began in June 2021 with the final approval of Tenebrio Molitor (mealworms).

Edoardo Imparato, Co-Founder of Small Giants, commented on the investment round: “We are excited for the closing of the round and, in particular, for the entry of investors linked to the iN3 Ventures network. It is fantastic to see that investors with great experience in the food sector believe in our project. Thanks also to their support, we will now be able to develop new products and support the expansion of Small Giants in both the UK and Europe.”

iN3 Ventures partners Andrea Crudeli and Mario Rizzola Pasotti added: “iN3 Ventures started exploring the edible insects’ trend months ago and Small Giants has everything is needed to be one of the leaders in this fast-growing market.”