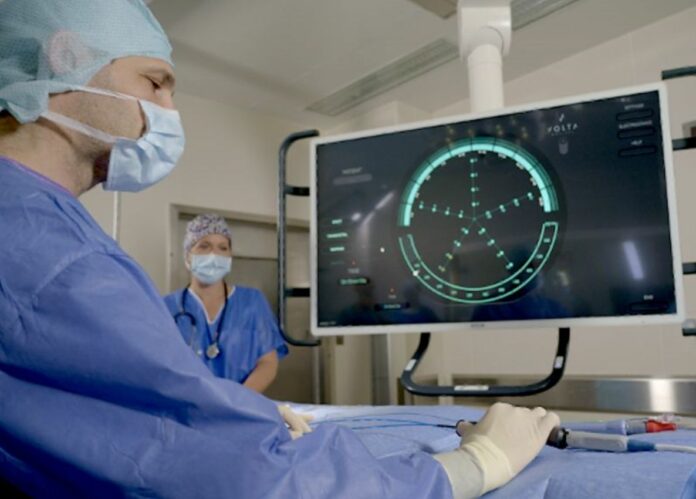 French healthtech startup Volta Medical, which is working on novel artificial intelligence algorithms to treat cardiac arrhythmias, today announced that it has successfully raised €23 million. The financing round was led by Gilde Healthcare, with participation by existing shareholder Pasteur Mutualité.

Founded in 2017, Volta Medical has developed one of the first commercially available AI softwares to help electrophysiologists improve management of cardiac arrhythmias, Volta Medical is now preparing to transform the way ablation procedures will take place in the future.

Atrial fibrillation (AF) can be considered an “electrical storm” in the heart’s atria, in which all synchronized activities have disappeared, and the necessary coordination of the contraction stops. This can lead to a number of symptoms including palpitations, shortness of breath, and in some patients, heart failure. AF is also a major risk factor for stroke, as stagnant blood in the atrium during AF may lead the formation of a clot that can migrate to the brain. AF increases the likelihood of stroke by four to five times and AFib-induced strokes that are generally associated with more severe damage.

AF is an extremely costly public health problem. Volta Medica state in their press release that it affected approximately 6 million patients in the US in 2019, and 11 million patients in Europe in 2018 and prevalence is estimated to double by 2060. They go on to forecast that in Europe 120,000 – 215,000 new cases are projected to occur each year reaching a total AF patient population prevalence of 14-17 million by 2030. Evidence suggests a higher prevalence of AF in patients with hypertension, heart failure, coronary heart disease, obesity, diabetes. In addition, recent studies show that 20-30% of patients with ischemic stroke have had AF before, during or after the initial event.

Atrial fibrillation (AF) currently affects over 30 million patients worldwide. This underlines the importance of the company’s TAILORED-AF trial which is likely to result in a breakthrough approach for tackling one of the world’s greatest public health challenges in a more consistent and reproducible manner.

Theophile Mohr-Durdez, CEO and co-founder of Volta Medical mentioned: “We are excited to be able to complete our highly ambitious medical programme with the start of TAILORED-AF, a new randomized controlled trial (RCT). This trial aims to demonstrate how our AI software can help physicians optimize both efficacy and efficiency when performing complex procedures to treat heart rhythm disturbances.”

According to Gilde Healthcare’s Janke Dittmer: “We are excited to support Volta’s team in bringing a unique solution to address one of the biggest unmet needs in the large and fast-growing electrophysiology market”.

The fresh funds will allow the company to establish its revolutionary software solution as a new standard of care, pursue further R&D activities and start to roll out commercial activities across the US and Europe.