Curve, the London-based fintech that combines multiple cards and accounts into one smart card and even smarter app, today announces it has secured around €78 million from a leading group of international investors as part of a successful Series C round.

Curve (founded in 2015) will deploy the investment to expand internationally, including to the US, and to deepen its European reach. The scaleup will also use the fresh funding to drive ongoing product innovation, notably of Curve Credit in early 2021.

The funding round was led by IDC Ventures, Fuel Venture Capital and Vulcan Capital (the investment arm of the estate of Microsoft co-founder and philanthropist Paul G. Allen), with participation from OneMain Financial (NYSE: OMF), the US personal finance company, and Novum Capital. IDC Ventures has funded some of the world’s brightest tech scale-ups from across the globe, such as Tradeshift, RecargaPay, Boatsetter and CookUnity. Counting IDC Ventures, Curve also attracted many of its investors for a second time. The fundraise brings the total investment in Curve to around €144 million.

Shachar Bialick, founder and CEO of Curve, said: “We are ecstatic that our investors share Curve’s vision to empower as many people as possible to take control of their money and move banking to the cloud. This fundraise stands out as an endorsement of Curve’s unique product strategy, the excitement surrounding the debut of Curve Credit, and the upcoming launch of Curve in the US. I want to thank our partners and shareholders, and the entire team at Curve for their tireless work to thrive throughout 2020.”

Bobby Aitkenhead, Managing Partner of IDC Ventures, said: “Curve’s pioneering approach to finance is more necessary than ever as we accelerate globally to a digital-first world. We are proud to support Curve as they bring their much-needed seamless banking experience to the United States in 2021. Ever since we first invested in Curve in 2019, Shachar Bialick and his team have inspired us with their energy and vision of an all-in-one banking platform. IDC Ventures looks forward to scaling this journey to greater heights in 2021, reaching more people, with more products in more regions.”

Curve’s Series C fundraise comes at the end of an impressive 2020 performance, in which Curve reached 2 million customers, launched a range of new products and partnerships, and hired a world-class team. Curve has also introduced its novel ‘Anti-Embarrassment Mode’, a feature ensuring that customers never experience a decline, and expanded its proposition to include Loyalty Cards, taking another step towards making wallets obsolete.

10 promising Cyprus-based startups to watch out for in 2021

Tamaz Georgadze, CEO & Co-founder of Raisin, will speak at the EU-Startups Summit about bu... 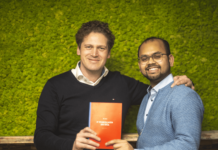