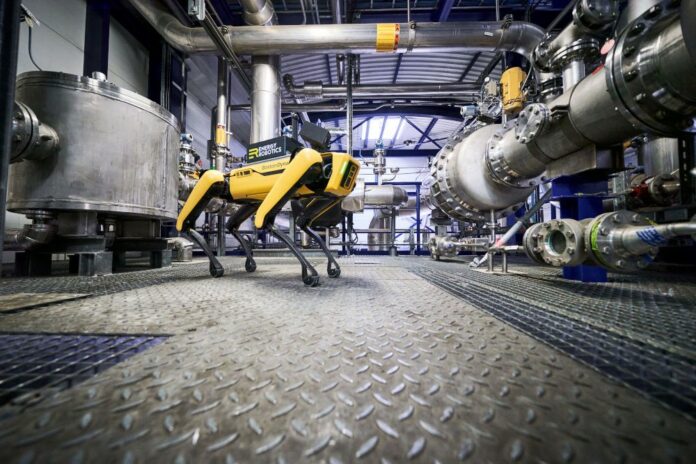 The German company Energy Robotics, a developer of software solutions for mobile inspection robots, has received €2 million in seed funding round led by Earlybird, alongside other prominent business angels. Interestingly, one type of robots worked on by this startup, alongside company Boston Dynamics, were the inspiration for the robot dogs from the ‘dystopian future’ series Black Mirror.

Founded in 2019, Energy Robotics has launched one of the first commercially available software platforms for industrial applications that combines three essential components of intelligent control of mobile autonomous robots: a hardware-independent robot operating system, a cloud-based fleet management, and an AI-powered data analysis. The robots are used for remote inspection and monitoring, especially in industries with harsh and demanding environments such as the oil, gas and petrochemical industries, but also increasingly in the energy and security industries. The company relies on a SaaS model to do this, offering its software solution and associated IT infrastructure along with hardware from various third-party vendors.

The new investment enables the Darmstadt-based team to further develop their software-as-a-service solution and expand their product portfolio towards a platform economy and robot-as-a-service. In addition to European technology investor Earlybird, which has led first financing rounds in billion-dollar companies such as UiPath, N26 and Peak Games, further investors are participating: multi-supervisory board member Dr. Paul Achleitner, former CEO of Austrian oil company OMV Dr. Gerhard Roiss, and Martin Klässner, e-mobility expert and CEO of has-to-be GmbH. Business angel and serial entrepreneur, Andrej Henkler, known for his early investments in companies such as Palantir, is also among the new investors.

Earlybird sees great potential in the Darmstadt-based startup: “The perfectly-coordinated founding team of Energy Robotics combines decades of experience and leading expertise in intelligent autonomous software for mobile robots with visionary entrepreneurship and a “doer” mentality,” explaines Dr. Andre Retterath, Principal at Earlybird. “The company is growing fast – despite its early stage, the team has already been able to win numerous pilot and license customers such as Shell, Dow Chemical, E.ON and Merck. We are firmly convinced of Energy Robotics’ hardware-independent software approach. It allows the start-up to assemble the best possible fleet of mobile autonomous robots from various third-party vendors for a variety of customer use cases, controlling everything through a common interface and thus scaling optimally at the data processing level.”

“We see our solution as a platform for autonomous remote inspection and monitoring. Our goal is to offer customers our software in combination with the hardware they require, and the robot best suited to their specific use case. In doing so, the platform not only combines different types of robots, but at the same time enables the integration of a variety of apps to perform AI-based analysis of the collected data,” explained Marc Dassler, Co-Founder and CEO of Energy Robotics. “With the newly acquired capital, we are now in a position to grow further and expand our offering and partner network. We are therefore very pleased to have Earlybird and the other investors on our side who see our vision as forward-looking and are promoting it accordingly. For us, it is clear: autonomous robots will significantly change the coming decade, and we are at the forefront of shaping this change.”

With Boston Dynamics and its walking robot called ‘Spot’, the company’s network expanded in September 2020 to include another well-known robot manufacturer. The start of the collaboration was marked by a joint project at the Merck pharmaceutical group in Darmstadt. There, ‘Spot’ was equipped by Energy Robotics with cameras, sensors and intelligent control software to record inspection data during autonomous inspection tours. In this specific application, the walking robot can read pressure gauges and inspects air outlets.

So what do you think – apocolyptic future warning, or friendly useful assistants?

Share
Facebook
Twitter
WhatsApp
Linkedin
Previous article
Bucharest-based DRUID snaps up €2 million to expand its conversational tech internationally
Next article
London-based Curve, the ‘over-the-top’ banking card and app, snaps up €78 million to expand further across Europe and the US