“We were adamant about finding a one-step solution”: Interview with inne’s founder Eirini Rapti 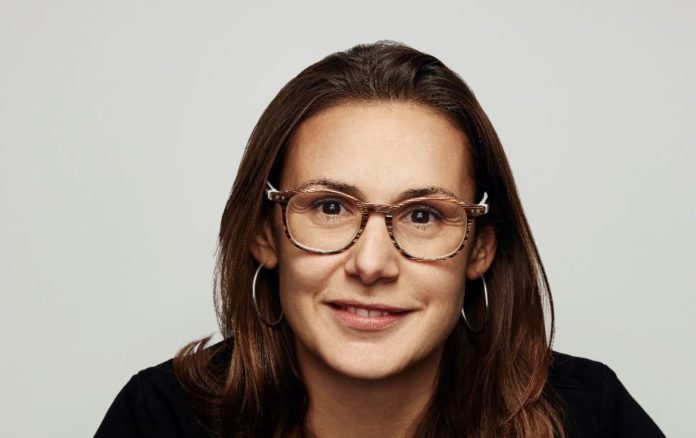 On a rainy April day, I had the honour of interviewing Eirini Rapti, the founder and CEO of femtech startup inne – a hormone-based mini lab for women. Despite us being complete strangers, separated by two screens and a few thousand kilometres, the connection was instant and what started as a classical interview quickly became an in-depth conversation about life, product design, and everything in between.

Over the last four years Erini, a healthcare professional gone entrepreneur has grown a diverse Berlin-based team that successfully launched their first product a few weeks ago. More than just a natural contraceptive method, inne is a radical self-knowledge tool for all the phases in a woman’s life. Since founding the company in 2016, Eirini has made the conscious effort to hire both designers and scientists to create a science-based product that is truly delightful for users. In the following interview, she tells us how the idea came about, why they chose Berlin as their base and what design, tech and science can learn from each other.

Eirini, thank you very much for taking the time to talk to me and congrats on your launch! Can you tell me a bit about your backstory and how Inne came to life?

It started with me meeting my partner. When we met, I was 32, currently single and not using any type of contraception. For the first time in my life, I made a conscious decision to stay clear of hormones and set up an appointment to get an IUD. After explaining to my gynaecologist that I thought this was my only non-hormonal option, she asked if I’d be open to trying the natural method. She whipped out a little piece of paper, drew up my cycle length, told me to buy a thermometer, what to look out for, gave me a few books to read and sent me on my way.

At some point, I wanted to find a tool to help me collect this data about myself, but the existing tech at the time was very much from the 80s, with bulky plastic hardware that just wasn’t very sophisticated. The science behind it was just as cumbersome.

I decided to take matters into my own hands and create something that fits my lifestyle and could be just like the other fantastic tech products I used as extensions of my life from the kindle to my apple watch. The goal was to create a product that was small, lightweight, well-designed that could travel the world with me. This quickly turned into a vision to build a science-based company to accompany women throughout all their phases in life.

Regarding this high expectation on the products in your life to be well-designed, how did you manage to build this bridge between design and science in your company?

This has a twofold answer; one is my personal journey into delightful products that improve and simplify my life. I worked in medical evacuations for a long time and had to travel a lot and work in fast-paced, ever-changing environments. I learned to appreciate packing very little and having access to information fast. From Blackberrys to small computers, I always looked for tech that allowed me to live a full life, keep me connected with people at home, but made me light as a person. I designed a decluttered life for myself, which made me feel incredibly free.

Now for inne, specifically creating a product in FAM (fertility awareness method), I knew if I wanted to create something that women can benefit from, it has to be used properly at the right times of the day in order to be accurate. The only way to make sure these habits are built successfully is to create a beautiful product that can seamlessly integrate into people’s lifestyles – and even create a sense of delight.

How has this “delightful design” approach influenced the setup of your team?

It has been great to see design and science intertwine and influence all parts of the business from hiring to product development to scientific testing. We have a fantastic Creative Director, Franzi, who used to work at IDEO and has brought in a lot of her design practices that have become critical to the way we do things. In January 2018 we were four people: our lead scientist, one research scientist, Franzi as the only designer and me. Today in 2020 we have three designers out of the team, which is a very high design ratio for a biotech company.

Design has profoundly impacted the way we solve problems. In the first couple of years we had to make many scientific decisions: how we structure the tests, how we normalise saliva collection, how we make sure the strip isn’t removed too early – these are essentially interaction design touchpoints. Having Franzi there, giving her design input drove our scientific thinking into a creative problem-solving approach. We went into a prototyping mode quickly, we worked on intermediate solutions, something a purely science-based team would have never let happen. We pushed ourselves to fail fast so we could make our product user friendly and create delightful user experiences as early as possible.

Can you give me a concrete example on a product decision that was made like this?

A good example is the saliva test. Pretty much every saliva test is a two-step process: one step to collect the saliva and another step where you have to place it somewhere to be analysed. From the beginning, we were adamant about finding a one-step solution. We said the users need to have as little steps as possible, how can we make this work? It became a complex mechanical problem, an engineering problem and became an iteration of many solution suggestions and countless failures until we finally got it right.

How was making a ‘one-step solution’ for the scientists and the others in the team?

Nothing has been easy, but the scientists that work with me were longing for this type of input. In general, scientists want to share their knowledge with the world, so developing a product that actually goes out to the world is hugely gratifying. Even though this approach doesn’t necessarily fit their training or their way of working, the “aha moments” make it all worthwhile.

On the flip side, the rest of the team has profited immensely from the scientific approach, and each of us now set ourselves up to doubt even a good result, helping us strive for excellence.

People talk a lot about tech – in our product tech is not “just tech”, it’s also science. Many other companies have successfully applied design thinking to hardware and software and created amazing products. What we were doing as pioneers was not only applying a user-driven approach to create the software and hardware part of our product but also to the science part.

What is the biggest piece of advice would you give to anyone else designing their product?

Don’t assume you know what people need, ask them. Do interviews, questionnaires, show prototypes and then filter out what you think will be useful.

Of all the places you could have chosen to set up shop, why did you choose Berlin?

When I did all of this, I knew I had about six months to figure out which scientific approach I would follow. My naive early entrepreneurial brain wanted to work with a university instead of having an in-house science team, which thankfully didn’t happen. We had three startup hubs as options: London, Berlin or Lisbon. London was where I spent my 20s, so been there, done that. In Lisbon, I didn’t have any ties. In Berlin, I had many contacts, mentors and an entrepreneurial support network. A friend and mentor, who then became one of the first angel investors in our product, offered me a desk in his office and it all sort of started from there. Now, four years later we have a lab within the Bayer CoLaborator in Wedding and our own office in Mitte.

What’s up next for inne?

Last week we shipped our first set of products to the UK and Sweden and are now shipping in Germany too. It’s been exhilarating to see the first responses to the products. This year is about getting close to our customers and delighting them. Our number one priority is getting as much user feedback as we can and improving the product accordingly.

Another big plan is a clinical study in the US, even if it will be delayed due to the current crisis, it is still scheduled to happen as soon as possible. We’ll also be going through FDA regulatory approval, which will be a big deal for us.

Closing off, what do you see for the femtech industry in the next 5-10 years?

Consolidation. I believe that women are looking for products that can take care of their various needs in female health and therefore I believe the industry will move towards a consolidation of services into ecosystems, thus serving women better.

Monica Scott
Monica Scott is a Design Strategist at Goodpatch, an independent design firm with offices in Tokyo, Munich and Berlin. She is passionate about bridging the gap between corporates and startups and supporting them both in bringing their ideas to life. She has a particular sweet spot for “taboo tech” and aims to give brave startups and founders in these industries a platform to share their visions.
RELATED ARTICLES
Funding