“Self-funding is a growing trend for a reason”: Interview with Recruitee’s CEO Perry 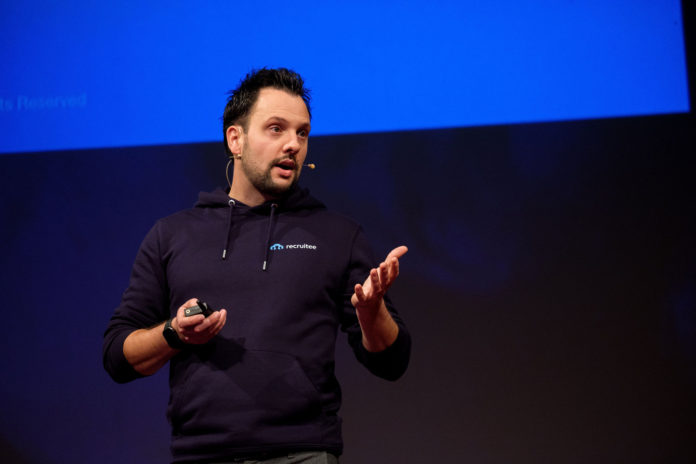 With all the hype about startup financing rounds, it’s easy to become mesmerized by a long line of zeros and forget that accepting funding can bring its own challenges.

Ambitious HR tech startup Recruitee is one of the companies that have cut their ties with VCs in favour of the freedom that they see associated with self-funding: the space to focus on product, build a sustainable team and make decisions about the direction of the company as they need.

To find out more, we sat with CEO and co-founder Perry Oostdam, to get inside Recruitee’s journey to self-funding and what advice they can offer other startups.

Hi Perry, thanks for joining us! Can you tell us the story of Recruitee, its mission and how its grown since launch?

It’s Recruitee’s mission to make hiring easy, fun, and accessible to everyone. We strongly champion the concept of ‘collaborative hiring’ in our software, which we believe empowers teams to reach their full potential.

Previously, Paul (co-founder) and I started a gaming company. As we grew, we expanded our team and quickly found the process extremely frustrating. The tools were clunky, the candidate market tough… that’s when we decided to pivot and create Recruitee. We wanted to create a scalable and international business that supported other companies in optimizing their hiring.

Ever since, we’ve experienced 100% growth year over year. We now have over 3,000 customers in over 74 countries. This growth has been primarily driven by a focus on inbound (no outbound) sales and a keen eye on sustainable growth practices. Adding value via our content and community has played a big role in this inbound approach. Since launching in 2015, our team has grown from just the two of us (myself and Paul) to 85 people in three offices.

You’ve raised funding in the past, but are now an advocate for self-funding (in fact, we can see that you are now one of the only fully self-funded Applicant Tracking Systems). Could you tell us how you came to this crossroads?

This is always an interesting question for us, especially because we did have seed funding back in 2015. But as we started growing and saw the real potential in our product, Paul and I realized that we both preferred to determine our own destiny – we didn’t necessarily want a one-way journey towards VC funding, exit, or public listing. This freedom was far from guaranteed when you consider the pressures that come with funding.

So, when the opportunity came along, we opted to buy out our seed investors. We felt this would give us the ability to enjoy the freedom of determining our own unique path. And more than that, we felt that it bought us the flexibility to focus on building a great product rather than single-mindedly driving growth.

We’re not fully excluding the option of external funding forever, but right now, we feel that our customers are the best way to sustainably fuel our growth. Self-funding is also a growing trend for a reason. We’re seeing more businesses, like Wistia, deciding to buy out their investors so that they don’t have to make certain sacrifices. With giants like Mailchimp proving that self-funding is a viable route to reach 700 million in revenue, we won’t be the only ones walking this path.

How has Recruitee built its self-funding strategy?

We’ve learned that cash flow is at the very core of self-funding, which shouldn’t come as a surprise. Once you’re footing the bill, you need to make sure you know where your cash is so you can keep everything running.

The trick is asking as many customers as possible to pay one, two, maybe even three years in advance. And you’ll have to balance this with spreading as much cost as possible. Ultimately, this creates a healthy business model. We’re not in the habit of footing huge costs before any benefits come in.

What one piece of advice would you give to a startup thinking of doing the same?

Openly ask your partners and suppliers to help you. You’d be surprised by how many tools agree to bi-yearly payments instead of big one-off fees that are not as friendly to self-funders.

Most importantly, plan carefully. You’ll always have unexpected setbacks. For example, you’ll probably end up hiring more people than you originally planned for. Clients may have more stringent requirements than you anticipated, like audits or security certificates- you might have to hire a lawyer. And then as you become more successful, bigger invoices will take longer than expected.

You’ve spoken about the ‘freedom’ that comes with being self-funded. Can you explain the benefits that Recruitee has experienced having ending its relationships with VCs?

Not all VCs are the same, but from our experience and other scale-ups’ stories, meetings with VCs primarily focus around numbers. It really boils down to how fast you’re growing month over month. While numbers are important, there are other growth aspects that are often overlooked by VCs.

We care about the product a lot and have invested heavily in our product team as our foundation. This level of investment probably wouldn’t have been allowed by a VC, as it wouldn’t have shown short-term, immediate results, but ultimately we know our industry and we know that a great product will fuel long-term success.

One of the greatest benefits of being an entrepreneur is the freedom. And part of that freedom means being empowered to make your own decisions and prioritizing what you feel is necessary.

What is Recruitee’s long-term vision for growth?

Simply put, we want to be the number one recruitment tool for mid-market businesses worldwide. We’re not yet aiming for enterprise-level, but we’re certainly trying to capture the market beyond SMEs.

Long-term we’ll be looking to get there by boosting our organic growth (investing in activities like SEO and brand building) and optimizing our paid channels (like events, ads, and growth hacking techniques). Luckily, we’re in a position where doubling down on what we’re currently doing has the potential to get us there.

What has been one of your biggest failures, and what did you learn from the experience?

Definitely agreeing to an office space in Amsterdam’s city center while our alternative option was not cancelled yet. We almost ended up with two contracts – a whopping five years each – that boasted above-average rent prices. We quickly learned that broker B2B laws work differently than default B2B laws, where signed contracts are needed to force someone’s commitment.

How do you see the European funding landscape changing in the next 5-10 years?

The landscape for venture capitalists is shifting pretty rapidly. Things are becoming far more transparent and this has favored founders. We see a big movement towards more “honest” terms. For instance, VC firms that have founder-unfriendly terms like multiple liquidation preferences will lose to those who give more forgiving terms.

We have a saying among founders: “the better the VC firm, the better the terms”. We experienced the same when chatting to investors in the summer of 2017.

New funding models have really been the catalyst of this shift towards a more transparent VC environment. Traditional VCs are no longer the only kid on the block when it comes to getting funding- think self-funding, crowdfunding, employee commitment, loans- there’s just more competition.  As a result, we’ve seen new VC firms popping up that invest in startups without founder dilution. They take a percentage of the revenue rather than shares.

We’re also seeing more banks entering the mix. They’re now more familiar with SaaS and tech funding and they offer attractive loan schemes for startups. One really notable player in this space is Silicon Valley Bank, which is active in the Netherlands and allows startups to borrow a fixed percentage of their yearly recurring revenue.

Inevitably there will be more disruptors in this space as more growing companies seek viable alternatives to funding, as we have. We’re definitely looking at some exciting times ahead.