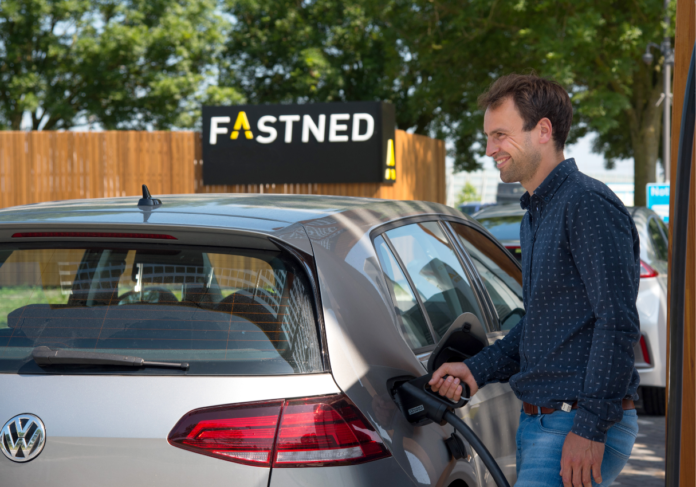 Fastned, the Dutch startup building a European network of ‘fast charging stations’ for electric vehicles, has announced raising €12 million with the issue of bonds. Almost a thousand investors subscribed to the issue, which offered bonds with a maturity of 5 years and pay out at 6% interest per year.

Furthermore, the startup has also just announced acquiring 13 new highway locations in Belgium. At these stations electric cars will be able to charge up to 350 kW with 100% renewable electricity. These new locations are part of a partnership with the Agentschap Wegen & Verkeer (AWV) to provide highway parkings in Flanders, Belgium, with fast charging stations.

Fastned, founded in 2012, aims to give freedom to the electric driver and accelerate the transition to electric mobility. Its goal is a European network of fast charging stations where all electric cars can charge. Its stations are located at high traffic locations along highways and in cities, where electric cars can add up to 200 km range in 15 minutes. All Fastned stations are open 24/7 and are suitable for all electric cars. Paying is possible via the Fastned app or by swiping a charge card in front of the charger, and additionally, EV drivers can fast charge with almost any charge card, fuel card/credit card at Fastned.

Michiel Langezaal, CEO Fastned commented on the bond issue: “It’s great to see so many people invest in the transition to a more sustainable world. With the proceeds of this bond issue, we can further expand the capacity of our network with more stations and more faster chargers. This will allow us to continue to meet the growing demand for fast charging.”

Veva Daniels, spokesperson for the Agency for Roads and Traffic spoke about the new charging stations in Belgium: “More and more people want to invest in an electric car, according to a Vias study. One out of six Belgians indicates that he or she is considering to buy an electric car within three years. The expansion of the number of fast charging stations for electric vehicles along the Flemish motorways makes it easier to use an electric car. We support every initiative that increases confidence in electric or zero emission driving.”

Share
Facebook
Twitter
WhatsApp
Linkedin
Previous article
“Self-funding is a growing trend for a reason”: Interview with Recruitee’s CEO Perry
Next article
Call for applicants to the ‘Rising UP in Spain’ acceleration programme! (Sponsored)