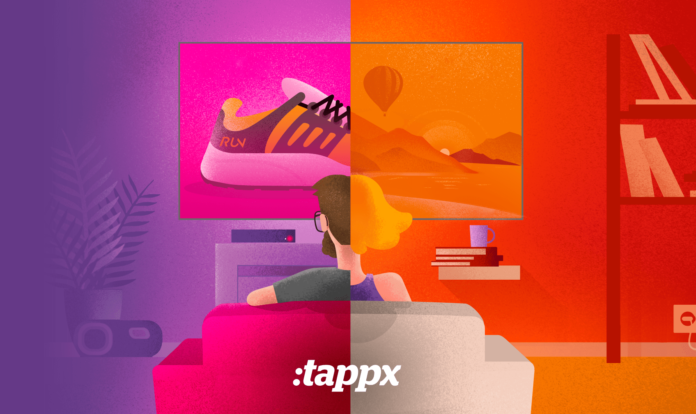 Like any sector, the world of digital advertising can be full of acronyms, so let’s break this down. A CTV (Connected TV) is the device by which you watch content, typically a TV that is connected to another device to make it ‘smart’. Then, OTT (‘Over-the-Top’) content refers to content streamed to your TV from another device like a smartphone, laptop, desktop or table, for example using Amazon Fire Stick to stream video from your smartphone to your TV.

The Tappx EU Horizon 2020 project, known as Tappx PSSAI, is poised to disrupt the global digital TV advertising industry, because it can seamlessly manage and insert contextually relevant OTT video ad content into what you’re already watching on your connected TV. For example, a holiday travel video ad is inserted following a TV scene of people boarding an aeroplane. Tappx PSSAI is powered by AI and machine learning, making ad content even more relevant for users and increasing trust in advertisers.

Tappx PSSAI also has a number of benefits over other solutions on the market. Firstly, it is compatible with any type of digital CTV or smart device, reducing the future costs associated with deploying other new video players or devices. Secondly, it solves one of the biggest problems facing the AdTech industry – ad blocking, as its technology makes it possible to circumvent current ad blockers. Thirdly, it is device and player independent, whereas current client side ad insertion systems require individual media players.

David Lahoz Martin, Product Strategist, at Tappx, commented: “Tappx is immensely proud to have been selected and supported by the EU Horizon 2020 initiative. Their backing is validation of Tappx’ hard work and unstoppable drive for true innovation. The new Tappx Programmatic SSAI allows for targeted and non-intrusive programmatic advertising to be conducted at scale in the streaming video market. This quantum leap in SSAI methodology and technology offers true programmatic advertising capability for the OTT/CTV market, allowing for contextual and automatic insertion of targeted ads within internet streamed video content.”

In 2018, Tappx was voted Spain’s 2nd fastest growing startup by TECH5 and The Next Web. Tappx’ platform currently processes over 400 billion ad requests per month worldwide. Tappx was founded in 2014 by Daniel Reina (CEO) and Antonio Hervás (CTO) and has a global presence with offices in Barcelona, China and India.