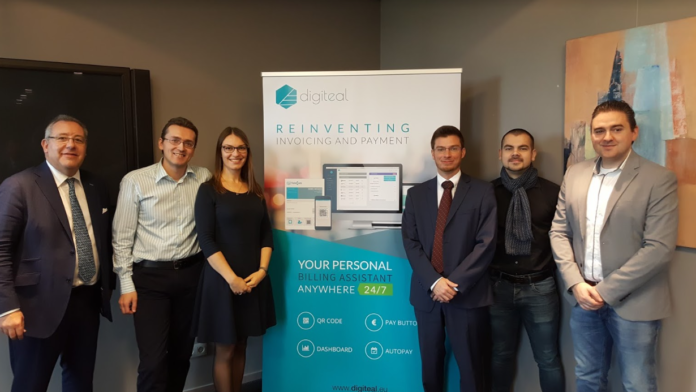 Belgian fintech startup Digiteal SA has just announced that it raised €832k in equity funding, along with a €200k loan for a total of over €1 million, which it plans to use to scale across Europe.

Founded in 2015, Digiteal offers every European a personal assistant to manage their e-invoices and online payments. The funding round comes in the wake of the PSD2 directive, which will come into full force in September 2019, and with which the startup is already compliant. As a payment institution, Digiteal is approved by the National Bank of Belgium and is therefore subject to very strict rules in terms of equity, IT security, and other matters.

The round was backed by existing shareholders EASI and LeanSquare, as well as new private investors via the crowdfunding platform Spreds, and Novalia.

Cédric Nève, founder of Digiteal, said: “This capital increase will allow Digiteal to move forward: providing even more trusted payments, being the first company to support the European standard for electronic invoicing PEPPOL for individuals, and deploying Digiteal across Europe.”

Jean-François Herremans, Managing Partner at EASI, commented: “The increase of EASI’s participation in Digiteal results from a great satisfaction following our first year of collaboration. We recognise EASI’s vision in their solutions and their way of working.

“Electronic billing and dematerialization are at the heart of our strategy. The potential we felt in this project has been confirmed over the months. There is a real match between the Digiteal solution and the market.

“As always at EASI, the human aspect has also convinced us to increase our involvement. Just like us, they believe in transparency towards their colleagues, shareholders, partners and customers.

“The founders and the whole team are very open-minded, too. Now that they have built solid foundations in 2018, they can focus on their evolution. Their motivation has pushed us to invest more in their project, financially as well as in terms of business coaching.”