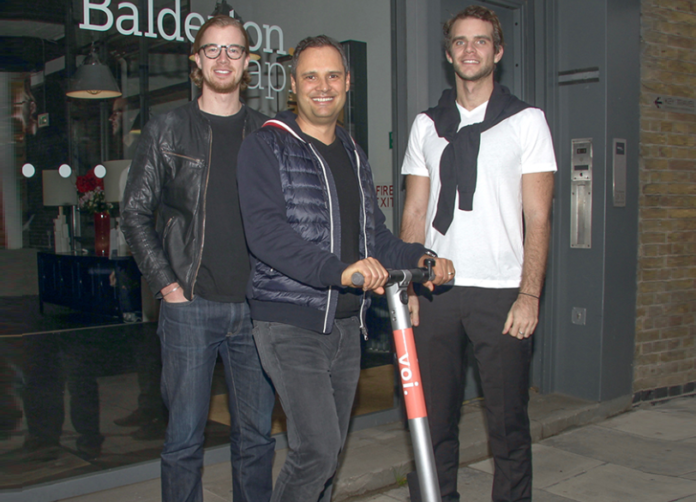 Launched in Stockholm, Sweden, in August 2018, VOI, the first European escooter sharing company to go live in multiple countries, was founded by Fredrik Hjelm, Douglas Stark, Adam Jafer and Filip Lindvall. With a shared vision of easing Europe’s traffic-clogged city centres and reducing pollution, the team set out to offer a clean, efficient, cost-effective and zero emission first-and-last-mile alternative to cars and taxis. VOI’s electric scooters have since been rolled out to Madrid, Zaragoza and Malaga in Spain. The team plans to use the investment to expand rapidly into new markets such as Benelux, France, Germany, Italy, Norway and Portugal in the coming months.

VOI CEO Fredrik Hjelm explained: “As a Scandinavian and European company, our approach is one based on dialogue and transparency. We strongly believe that using city streets and infrastructure to do business cannot be done without the full cooperation – and support – of the host city concerned. We have, for example, decided to hold off launching in cities where regulation clearly states that we shouldn’t, whereas some of our competitors have launched anyway only to be kicked out 24 hours later.”

Instead, VOI partners with local government to create solutions which work for both parties. “We’ll work closely with politicians and decision-makers to improve the transportation network in every city we operate in. We listen well and adapt when we need to – which is something that comes from our Scandinavian approach to business and is stitched into our corporate DNA,” Fredrik Hjelm continues.

After downloading the app, VOI riders locate a nearby scooter on the street or by using a map, press the ‘ride’ button, scan the VOI QR code and scoot anywhere in the city. There’s a €1 unlocking fee and a ride costs €0.15 per minute. In a matter of 12 weeks, the company has gained over 120,000 users, who have taken 200,000 rides, travelling 350,000km – the equivalent to over eight times around the globe – making VOI Europe’s leading e-scooter sharing company.

“We believe that the threat from climate change is imminent and people’s behaviour, particularly when it comes to travelling shorter distances within Europe’s cities, urgently needs to change,” said Hjelm. “Our electric scooters offer a quicker alternative to walking, a simpler alternative to the hassle of owning a bicycle and a more environmentally-friendly alternative to fossil fuel-powered buses, taxis and privatelyowned cars.”

Balderton general partner Lars Fjeldsoe-Nielsen stated: “VOI’s founders are exceptional, already proving that they can execute quicker, more effectively, and with better numbers than their rivals. But what’s impressed us even more is Fredrik and Douglas’s collaborative approach to working with governments at European, national and local level.”

By the way: If you’re interested to join a fast-growing startup like VOI, make sure to check out the EU-Startups Job Board.