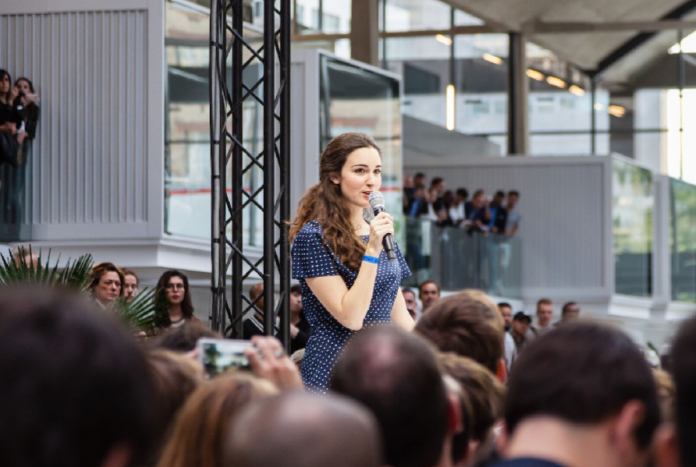 Born in California with Iranian roots, Roxanne Varza today runs Station F in Paris, the largest startup campus worldwide, backed by Xavier Niel. Prior to her current role, Roxanne was the lead for Microsoft’s startup activities in France and former Editor of TechCrunch France. Being listed by Business Insider as one of the top 30 women under 30 in tech, Roxanne is a passionate startup enthusiast, who co-founded StartHer (ex Girls in Tech Paris) and is the co-organizer of the Failcon Paris conference. She is also involved in the Conseil national du numérique (CNNum), an organization that works with the French government on digital matters, as well as the European Commission’s European Innovation Council (EIC). Enjoy the interview.

From degree in French literature to director of the largest startup campus worldwide, Station F? How was your journey so far?

Let’s just say that this the journey is far better than anything I could have ever imagined 🙂 I’ve been incredibly lucky to work on such an exciting project and be surrounded by such wonderful, intelligent people.

Station F is a lot more than 34,000m² of space, accommodating more than 1,000 startups through 26 international startup programs. What is the philosophy behind the creation of such a megacampus?

When Xavier Niel first had the idea for Station F a few years ago, the French ecosystem was very spread out. We had great funds, startups, accelerators, etc. but all very small and people outside of France had the sense that nothing was going on here. This is why Xavier had the idea to make a big, emblematic space that would house an entire ecosystem – he really wanted to bring everyone together and make the ecosystem more visible. We also wanted to have all resources on campus to help startups save time – now they can focus on their startups and they have everything they need right on campus.

The campus also functions in many ways like a startup university – there are 26 different programs, so startups can pick the program that is right for them, just like we’d pick a program at a university. Soon we’ll also open our restaurant space (open 24-7 to the public for 1000 people) and our co-living space (house 600 people)

Station F has announced its first extension with the construction of a co-living space. What other initiatives will you be introducing to the French startup scene?

We will be launching the Fighters Program in January. This is a program for underprivileged entrepreneurs – people that may not have any higher education or who may have a difficult personal story, for example. In the spring, our restaurant will open. This is the biggest restaurant in Paris – it will seat 1000 people, have 4 kitchens and a bar and be open 24-7 to the public. And finally, we will launch our coliving extension in the fall of next year to house 600 of the entrepreneurs at Station F. We have a lot of other projects but they are further down the line – these are the main ones for 2018.

With less than a year since the opening, what is your impression so far?

I’m so pleased with how everything has gone so far. It’s a huge space with a lot of different players involved – but everyone has been super supportive and contributed a lot. What we didn’t plan for was so many visitors – we’ve had a LOT of people come to Station F, everyone from the Prince of Monaco to Sheryl Sandberg.

What is your vision of the project?

When Xavier Niel first had the idea for Station F, he wanted to create an entire ecosystem under 1 roof. He wanted to provide resources to the younger and earlier-stage startups and he wanted to create a space that would be emblematic and visible internationally – people had the impression that there was nothing going on in France and this could not be farther from the truth. He also wanted to make entrepreneurship more accessible – meaning that now even people with no higher education, no specific experience, refugees, etc. could become entrepreneurs – this is what we are doing with our Fighters Program.

One element that is incredibly important for us is diversity – because it fosters innovation. So we are really striving to make Station F as international and as diverse as possible.

And finally, we are striving to make our offer to startups as all-included as possible so we will also be providing housing next year.

According to the European Venture Capital Report 2016, France is looking up. What is happening on the French startup scene besides Station F?

There is a lot. France is now the leading European country in terms of venture capital – ahead of the UK and ahead of Germany (Financial Times, Nov 2017). In terms of funding it’s a great place to be. BPIfrance, France’s sovereign bank, was also ranked the leading sovereign bank internationally by CB Insights last year. With President Macron, the French government is also very involved and committed to helping the ecosystem. One of my favourite initiatives is the Tech Talent Visa – a visa for people in the tech industry (including entrepreneurs and also investors). President Macron also committed another 10 Billion to BPIFrance for investment in innovation.

Entrepreneurship is perhaps more trendy than ever and there are tons of programs to become an entrepreneur but also to learn to code. The Ecole 42 (Xavier Niel’s free coding school) has made a lot of difference as well.

…this is just a start.

As part of many initiatives supporting entrepreneurship, one being the European Commission’s European Innovation Council, what do you think is missing on the European startup scene and how can the EU help?

Actually what’s funny is the EU is doing a lot but a lot of it isn’t very visible! So this is perhaps the first thing to change – and the Commission is aware of it.

Also, they are working at making their grants and support schemes more accessible to startups. Today a lot of what is done is not very startup-friendly (requires heavy paperwork, takes lots of effort and time, etc.) and also is more accessible to those heavy in R&D. But Commissioner Moedas (who is chair of the EIC) is definitely working hard to make the changes and I think he’s heading in the right direction.

As one of the founders of Girls in Tech, you are familiar with the difficulties women encounter in this industry. What is your opinion on the state of women in tech right now?

Our organization is now called StartHer (since 2015). It really depends on where you are talking about. I think in France, a LOT of progress has been made. We have more women founding and creating companies than ever, and the French ecosystem has a lot of women involved in investment as well. Paris has been ranked ahead of London and even Tel Aviv by the World Economic Forum as a place for women entrepreneurs – which is quite surprising. When we talk about engineering, however, this number is a lot lower (around 10%).

This year there has been a lot of news involving harassment and discrimination in the workplace, especially coming out of Silicon Valley. To be honest, I have not noticed these same types of issues in the French ecosystem.

Being a women entrepreneur, what has been your biggest challenge so far and what would your advice be for the future female entrepreneurs out there?

Am I an entrepreneur? 🙂

I always give 3 pieces of advice – regardless of gender:

2 – Start by launching a project, not necessarily a startup. I started by launching a blog, then a non-profit association, then a conference. It helped me build my network and I got lots of great experience (organizing events, securing funding or sponsors, building a team, etc.). You don’t always need to launch a startup necessarily.

3 – I tell everyone to learn a minimum of code. You don’t need to become a programmer, but knowing the basics will definitely help you gain confidence and understanding.