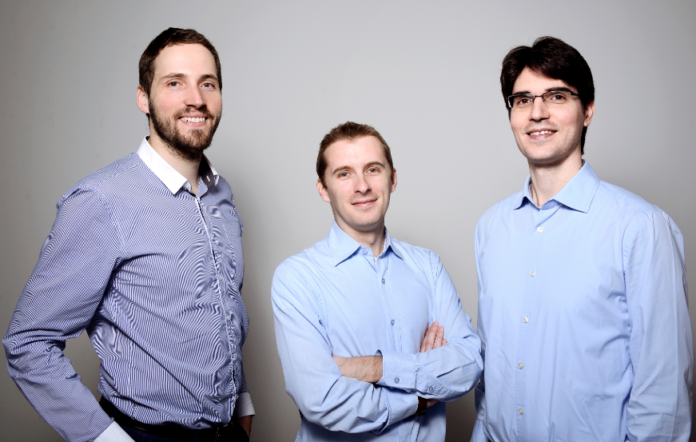 I have heard about OptoForce many times in the last couple of years, lately in October, related to their new investment raised from Denmark. I accidentally bumped into and get acquainted with the CEO, Ákos Dömötör at an event last month in Budapest, and asked him for this interview. Since I already know one of their investors very well, DayOne Capital (national winner of the ‘Investor of the Year’ category in Hungary at Central European Startup Awards in both 2015 and 2016), I also asked Aurél Pásztor to join the conversation.

What is your personal story, Ákos? Where do you come from?

I am actually not one of the original founders, I studied both technical topics and business. After graduation I got a job at LEGO working in many different countries. After a while, I got a bit bored and had the idea of joining a smaller company for a better impact.

The founders of OptoForce found me on LinkedIn, and soon after that I was offered with the CEO position after the second round of the interviews.

Aurél adds: OptoForce was practically a university spinoff with 2 technical founders when we invested and even from the very first day the investors (Finext Ventures and us) had been looking for a CEO. First they got a headhunter who found a guy who looked perfect on paper, but that time they only had a technology without a defined product, and no idea how a product should look like. It was a long journey before we could find Ákos and Peter Fodor (†), the advisor of Finext Ventures was the one who had the feeling that however Ákos was not perfect on paper, he was the one they were looking for.

Who are your competitors?

As mentioned earlier, in the beginning it was hard to define the product, so we are actually happy to have competitors now. 🙂  It’s a relatively small industry, there is ATI Industrial Automation, pretty much the only one on the market from the USA, creating special sensors, but they never managed to make them user friendly as much as we do. Robotiq is a Canadian company who introduced their first sensors about the same time as we did, and I can also mention a Japanese company, WACOH-TECH.

What would you do differently from today’s perspective?

The most important part so far was to find our market. We probably could have done it better, but the way we did it, trying to sell then see how the market reacted was a very useful way.

The technology was very interesting in the beginning, but the sales and marketing skills were completely missing. Next time if I start a company, we will immediately start asking customers what they need.

Who are the founders? What is their background?

They are Ákos Tar and József Veres, used to be fellow students, working together during their master studies and even shared their room. They started doing it as a pet project at the university and their biggest pain was how to solve the problem of robots making steps (start walking) as all the solutions out they were too expensive. Since there was no affordable solution to sense that a robot was balanced, they went on to their PhD studies and decided to carry on their pet project and kept developing it throughout their studies and after graduation they decided not to join a company but to start a company around it. They met an angel investor, Zsolt Szigetlaki who introduced them to Finext, and in the end they seed invested all together with DayOne. This first round was 600k EUR, the second one we have just realised was coming from Enrico Krog Iversen, together with another round of investment from DayOne and Finext.

How does the team look like? What is the size and the setup?

It is changing day to day, yesterday was 16, today 18. Most of the people are electrical engineers, computer scientists and some people on sales. Most of the production is outsourced and the top of that (like calibration) is kept in house.

Can you tell a bit more about the business model?

We are now in the switch from selling to academia (research institutes) to selling through robotic distributors and system integrator to factories.

How about your financials?

Our revenue figures: we have made 500k EUR revenue this year, and the plan is to multiply it each coming year. We have been close to cashflow positive in the last few months.

How did you find each other with Enrico Krog Iversen?

He was looking for new investment opportunities. This industry is fairly small and well connected, and we got introduced to each other by Invest in Odense. Enrico had been in the industrial automation business and that’s what we were looking for as a background in our investors, so it was a very good match.

How do you see your situation as a startup coming from the CEE region? Was it more challenging to raise money in the Nordics? Disadvantages, perhaps advantages?

I used to work a lot in Denmark, Danish people make things/decisions simpler. If we were in Denmark or Germany we would be probably much more confident in ourselves. On the other hand, it does help a lot that wages in Hungary are lower as we could hire more smart people from the same budget. I know about a company in Denmark with the same revenue stream and they have only 3 people hired full time, so we could hire 5 times as many.

Aurél adds: it’s more helpful if a startup has direct access to industry players locally. We tried reaching out to big industrial players in Hungary but we had to realise that very often they were simply not the right people to talk to. Most of the decisions were made at the R&D departments in the headquarters.

What is your next big goal to achieve?

We are now working very hard to attract system integrators / distributors – 20 of them signed up now, and we are reaching out to 50 early 2017. To achieve that, we need products easier to use, and better software for more complex solutions. We are hiring engineers, software developers, mechanical engineers to build solutions for more types of robots.

How much help did you get from your local investors?

Aurél adds: we usually don’t step into operational roles at a company, but now it happened and turned out well. We made many introductions, connected the company to other investors, though we had to turn some of them down, those negotiations also helped the company. Now as they are hiring the key people and we try to keep them on focus.

Aurél: sitting on the other side of the table, what did you see in Optoforce that made you interested in them as an investor?

I first met them at an event called Startup Undergrund, and the previously mentioned angel investor Zsolt Szigetlaki was also very excited about them. No one we asked has ever seen similar technology before. The 2 guys looked very serious about their project, and seemed to be willing to work very hard for this. We never had any attitude issues that we sometimes had with others. These guys never really panic and keep on pushing it, which is great.

Peter Kovacs
Peter Kovacs is the Co-Founder of Global Startup Awards, xLabs and IseeQ . He contributes to EU-Startups with founder interviews and stories, mostly from the CEE region.
RELATED ARTICLES