Fundacity, a Hungarian – Latin American startup, one of the world’s most popular platforms for startup accelerator programs has just got acquired by Gust. (More info on the details [HERE]). I have been really excited to make this interview happen with Miklos Grof, the Hungarian co-founder to gain a unique insight behind the scenes and to share it with you.

What is your personal story? Where do you come from?

Born in Budapest, moved with my family to Vienna age of 4. At the age 18 moved to the UK on my own to study economics. Since then I have been living far from family and friends which was a great learning experience to rely on myself to spot opportunities and hustle. In the UK I completed an undergrad in economics and two postgrads in finance and accounting at the London School of Economics (LSE).

How did you get the idea to start up? What did inspire you?

I was in corporate finance at PwC and I was very unhappy with my life / career. I felt I didn’t fit in. Even though this is what I studied and what I set out to do I came to the realization that it was wrong. I worked 3 years at the PwC during which I did a lot of self reflection to understand what I should do with my life. My mother died when I was 23 and I learnt at a young age that life is short and one couldn’t risk waiting to be happy later in life. We have to be proactive.

I recalled that as a boy I was always doing business buying and selling things between Budapest and Vienna (price arbitraging) everything from clothes, pirated games, DJ equipment to fireworks. It was entrepreneurial on an informal and tiny scale, but how does one become an entrepreneur as an adult? In all the degrees I did about business, at the best universities, not a single one seemed to have equipped me to be anything but an employee in large organization. in, 2010, during my second year at PwC, a friend of mine told me about startups and a program called Startup Chile, which is the first time i heard about this thing called a ‘startup’. It resonated very deeply…”ah so this is the name for the thing I am searching for.”. After 1-1.5 years of planning / researching I made the leap and moved to Chile without any idea, without speaking Spanish and without any support network. I didn’t have an idea yet but I figured I should quit everything to have mind space and move to a growing startup ecosystem and see if I can join / found a startup. I chose Chile and not Silicon Valley because I figured it would be less saturated and would have less foreigners with my skillset which would help me compete and differentiate.

At the time of acquisition we were 3 people, my co-founder Diego Izquierdo, Sebastien Brunet on the team and myself.

How could you make it only the 3 of you? We see other startups hiring dozens of SW engineers…

We are 10xers. Machines. People have called us bulldozers 🙂 At gust they could not believe we built what we have and did the BD with just us. Diego has been responsible for front and backend, I am a fullstack BDer (sales, accounting, fundraising, legal, management, scrums, user testing). We have had 1 other developer that worked with us for 1 year…actually 6 months…it simply didn’t work out. Then we never really had the money as we were always near death and out of cash… Honestly, there is no better motivator than imminent failure!

And you will be surprised how much more freetime you have when it’s just 3 workaholics sitting in the room, not speaking and working for 16 hours a day. It definitely helps that there is no stupid team meetings, management issues, group decisions, group conflicts etc etc etc. Just getting sh.t done attitude!

How did you meet your co-founder? 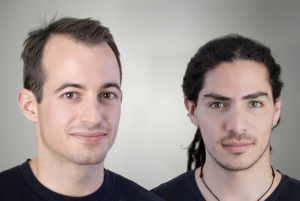 That was a great story. Went to Chile not knowing practically anyone. I applied to a startup competition with a random idea I had to solve my own problem called Fundacity. I got selected to participate in the competition but I needed an IT guy.
I went to various Universities and talked to IT kids, trying to recruit someone with my broken beginner Spanish. I was trying to recruit everywhere. I was doing a Spanish course and there I spoke to a colleague who had a friend who was a programmer called Diego and she connected us. He wrote me the next day via Facebook. He didn’t speak English, I didn’t speak Spanish so when we met we communicated using google translate. We ended up going to the competition together where it all began.

How did you know he was “the one”?

We were young and naive and simply said let’s give it a go and see where it takes us, the difficulty came when we both had to make a sacrifice and quit any other jobs we had on the side.

And how did you solve those difficulties?

We had to speak a lot and get confident that there was something there. I mean hours and hours, lasting weeks. At first we lost the competition and we had nothing. We really wondered whether we should keep going….should I even stay in Chile? Maybe it was a mistake? But we kept working and returning to the judges of the competitions for feedback.

And how about the language barrier? How could you get over it?

Language is still sometimes a barrier, we used google translate a lot! We still do today 🙂 And we speak spanglish and sometimes even mix in some Portuguese, which we have mastered now also 🙂 Anyway we went to silicon valley and got a bit of cash like 10k and with that we got 100% immersed because we both thought this was the coolest thing that ever happened to us and may be the biggest opportunity we had in our life even if just from a learning standpoint. So we went for it with 100% dedication from Feb 2013.

What made Fundacity different from its competitors? Who were your competitors at all? 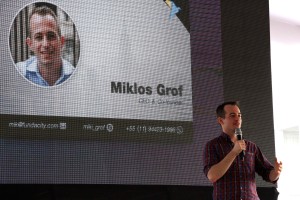 Fundacity helps accelerators launch and evaluation application rounds for their startup programs i.e. a deal flow manager SaaS. What differentiated us is: user experience, focus and being very close to our users. Our competitors are f6s, Gust and Younoodle. They have complex and large systems that do very many things. Their user experience is a weak spot which we decided to attack.

What were the main stumbling blocks for your startup, especially during the first year, and what would you do differently from today’s perspective?

1. Hiring wrong people and not firing quickly. As a startup you have very little resources and can’t afford many mistakes. Hiring the wrong person is probably the biggest resource drain an early stage startup can make. Wrong people waste founder time and distract focus. Burn a lot of cash in salaries for little result. In the years I have developed a very thorough interview process but still it is a 50:50 success rate.

2. I raised government financing. I wish I could say more but I am legally restricted from doing so.

3. Started a business in a bureaucratic and complex legal environment. Corp regs and taxation wasted a lot of my energy to understand and navigate. I am huge fan of the american system. Creating and operating a company is very easy there!

Did you raise money to achieve the acquisition? Or was Fundacity bootstrapped? How did your financial background look like?

We raised financing. Aceleratech, NXTPlabs, Primary Ventures and 3 angel investors which were friends from LSE and PwC.

Who was your typical customer? How has it changed with the acquisition?

Accelerators globally. However we mainly had traction with accelerators in LatAm and Asia due to our restricted finances which meant we had no budget to go after new geographies. With Gust we are now much larger and have presence in 190+ countries.

Can you share anything about the practical / financial details of the acquisition?

Unfortunately not. David, the CEO of Gust is very private about finances, in fact he didn’t even want to tell people he made acquisitions.

What are you going to do now, after the acquisition?

I am now a Director of BD at Gust and on the leadership team. My focus is accelerators. My objective now is going after all the geographies that we were previously unable to attend to. I hope soon to power European and US accelerators with our platform which is miles better from a UX and feature completeness basis than any other platform that currently exists. It’s all been really fun, I look forward to doing another few, with Diego we want a unicorn next, or at least won’t stop until we bang one out

So you are not planning to stay with Gust for a long time?

I am! I’m still young, just turned 30. My dad is almost 70 and is still super active, so I definitely plan long term 🙂