Great start: The first edition of the Heureka! conference 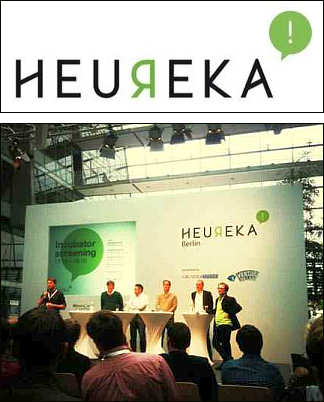 On Monday, I attended the awesome first edition of the Heureka! conference in Berlin. The one-day conference was a co-hosted event by Gruenderszene.de (a leading German blog about Internet startups) and VentureVillage.eu.

The event was held in a nice location – Energieforum, Berlin – and packed full of talks, discussion, networking opportunities and even – an outdoor BBQ. Aside of the interesting program, the Heureka! turned out to be a perfect event to meet and chat with countless superstars out of the (mostly) German Internet industry. Once again, I found out that I don’t enjoy networking that much – but that’s my own problem. 😉 The Heureka! conference offered its over 500 attendees the chance to grab a beer with guys like Dr. Stefan Glänzer (Passion Capital), Lukasz Gadowski (Team Europe), Alexander Kudlich (Rocket Internet), Michael Jackson (Mangrove), Sebastian Siemiatkowski (Klarna), Klaus Hommels (Springstar) and many more.

Check out VentureVillage’s “Live conference blog” to get an overview on what happened during the event. My personal highlight was the Incubator screening, which took place late afternoon. During the debate, the representatives of incubators like Rocket Internet, Team Europe, Project A, Passion Capital and Seedcamp talked about innovation vs. cloning, about what makes a successful company, the European startup ecosystem and about what they really think about each other. Lukasz Gadowski (Team Europe) initiated a group hug in order to show the crowd that there is no hate between the participating incubators. Since many successful European startups still get acquired by American (instead of European) companies, all agreed to Stefan Glänzer’s statement that: “We need to create European Internet players that are able to buy other European companies. We don’t have the big acquirers like Google, Apple or Facebook in Europe yet.”

To sum up, the first edition of the Heureka! conference was a complete success. Only the audio set-up could have been better (it echoed a little bit) – but I’m sure the conference team will fix this and I can’t wait to attend the second edition of the event in 2013.