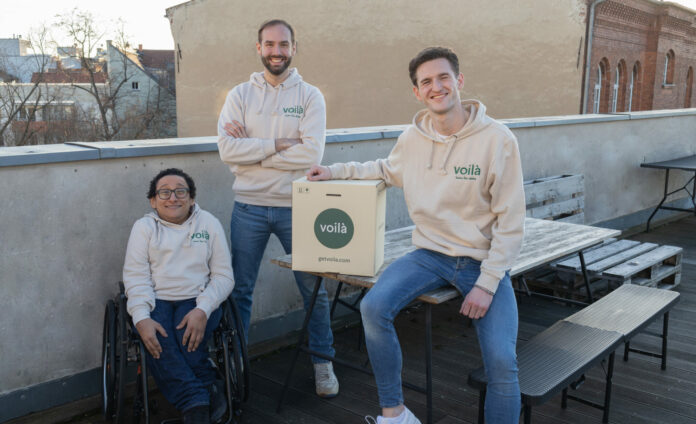 Today, voilà, the Berlin-based company that enables people to enjoy fine dining experiences at home, with nationwide delivery, has announced €8.8 million of new funding to accelerate its European expansion. The round was led by EQT Ventures, with participation from existing investors FoodLabs, Shio Capital and angel investors including Roger Hassan (ex-Hello Fresh).

Founded in May 2021 by Julius Wiesenhütter (CEO) with close friends Florian Berg (COO), and Mostafa Nageeb (CPO), voilà launched in August of the same year, following a series of trial deliveries from Paris to Germany. The team, who had previously worked with European food tech giants including Delivery Hero and Foodpanda, are bringing their experience in the industry to provide a high-quality restaurant experience at home in short delivery times.

Coupling the experience economy with the food delivery sector, voilà has already delivered to more than 1,200 cities across Germany. Partnerships include Cookies Cream (the first vegetarian restaurant to have been awarded a Michelin Star), Michelin-Starred chefs Hendrik Otto and Daniel Gottschlich, plus local authentic food trendsetters and tastemakers such as Dim Sum Haus in Hamburg and ramen specialist Food Technique in Berlin.

Co-founder and CEO, Julius Wiesenhütter, commented: “We started out to bring the best restaurants, most renowned chefs and tastemakers to food lovers across Europe… At voilà, we are not replacing visiting restaurants, we’re building something new: home fine dining, unlocking the experience category in food delivery.”

The food delivery market is booming, having tripled in size since 2017. Across Europe, food delivery isn’t a new trend – we all remember the days of phoning up restaurants for a weekend treat. However, fuelled in large part by the pandemic – food delivery has now become an industry that reflects the next level in European tech and innovation, and the industry has rapidly digitalised.

At the same time, last year – with remote and hybrid working becoming mainstream – swathes of European tech workers swapped their homes in big cities for a more rural way of life. In Germany alone, demand for homes in rural areas increased by 50% in May 2021 compared to the same period in 2020. At the same time, those accustomed to outstanding food from city centre restaurants don’t want to miss out on those experiences and crave variation their own home-cooking can’t always provide – enter voilà.

Alongside operations, voilà creates digital experiences to complement the food; for example, a QR code that links to a playlist curated by the chef, to accompany the meal – transporting customers into the world of the chef and restaurant. voilà also harnesses technology to optimise orders by creating new data-driven efficiencies. This gives chefs more time to spend on what they love: creating exciting gastronomic experiences.

Jenny Dreier, Venture Lead at EQT Ventures, added: “voilà has already supported local independent restaurants beyond lockdowns, enabling them to bring their unique menus to life nationwide, increase sales, and boost brand awareness long-term. With this new funding round, voilà can build on these achievements through a bold cross-border approach. The next few years will transform the market for at-home restaurant experiences specifically. This is just the beginning, and we are proud backers of the team at voilà, who are true innovators in the space.”