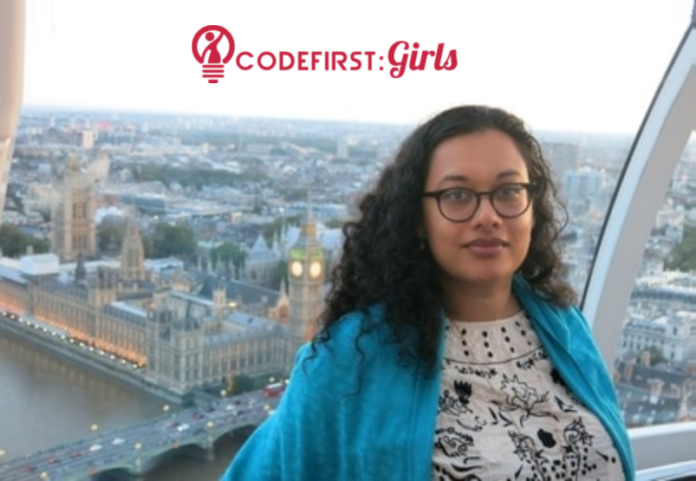 Code First: Girls is a multi-award winning social enterprise supported by partners including Bank of America, Merrill Lynch, KKR, Goldman Sachs, Google’s Campus, the Guardian, and Twitter among others. Founded in 2012, their aim is to help increase the number of women in tech. They run coding courses, career development events, and advise companies on tech talent recruitment and retention. To learn more, we talked to Amali de Alwis, the CEO of Code First Girls.

What was your motivation to start/join Code First Girls?

I didn’t actually start Code First: Girls (CF:G) personally, the founders of Entrepreneur First (EF) did. Like many things in life, the timing is essential. After a varied career working on tech and digital projects across the professional services and research industry, I found myself getting increasingly involved in mentoring. So when I came across the opportunity to head up Code First: Girls as it’s first CEO – as it was being spun out of EF and being incorporated as an independent company – I jumped at the chance!

Where does the name Code First: Girls comes from?

The name Code First: Girls came about from talking to our community. We wanted to reflect the fact that coding is often the first hurdle that stops people from embarking on a career in tech or as a tech entrepreneur, and the ‘girls’ part came from the young women in our community, as when we asked them what they preferred to be referred to as they said ‘girls’.

In your opinion, what are the hurdles that keep women from starting a tech career?

We need to see more women in tech, and especially at Senior levels, in order to inspire and attract more young women into the industry. The lack of tangible role models creates psychological barrier to entry. We think that bringing more women and minorities into leadership roles in tech and elsewhere can play a crucial role in reversing the current trend.

Code First: Girls is well aware of this, and that’s one of the reasons why we created Ones to Watch, an annual campaign where we nominate twenty-five high achieving women under 30 in the tech and entrepreneurship. It’s one of the ways we work to give greater visibility to the female faces of UK tech. We recently published the 2018 list of 25 young women who made it into our 2018 cohort, and have already received some great coverage.

What is the positive impact that women can have on the tech sector going forward?

Diversity is essential to any business that wants to succeed, and to society in general. Countless studies show that diversity in a business leads to greater productivity, a stronger company culture and ultimately, to better business.

On top of that, bringing more women in to tech, and in particular into leadership position in the sector, will help reduce the gender pay gap. All UK companies were required to publish their gender pay gap figures by April 4th 2018 and the numbers are depressingly low. Tech is the fastest growing sector in the UK, with the highest paying jobs and also the most job creations. But the number of women in the sector is too low – in 2017 for example, female Programmers and software developer made up only 3.9% of tech and telco professionals in the UK, and this is down from 10% in 2007. We need to see more women, in all types of positions, including in leadership roles to change this.

Who have been the key allies to make the project run successfully?

Our corporate partners along with our volunteers instructors and ambassadors have been our key allies. For example, we launched our Girls 20:20 campaign at the end of 2017 and we couldn’t do it without the support of our partners such as KKR, OVH, Goldman Sachs, Trainline, and Bank of America Merrill Lynch. In the past four years, the number of free community courses we run has increased from about 15 per semester to 51, and will increase further to 90 by the of this year. This means that by the end of this year we will teaching around 5,000 women to code fo free each year – a number that would have been impossible to achieve without all our partners.

How do you monetize Code First Girls? What were the funding sources to jump start the initiative?

Code First: Girls is a not-for-profit company, but we do generate revenues and then do amazing things with that revenue. We make money from the paid coding courses we run for professional women, and men and women at companies across the UK and Ireland, as well as through our other training, talent advisory workshops and event partnerships. This is, what allows us to finance the free courses that we offer.

What are your plans and major milestones for the near future?

In December we kicked off our 2020 campaign, which aims to teach 20,000 young women in the U.K. and Ireland how to code for free by the end of 2020. To help achieve this, we are working with partners and backers from leading employers. We’re on an all hands on deck mission to teach more young women to code and are on track to reach the 20,000 mark!

What has been the biggest success and biggest failure stories you went through during the last year?

The two biggest successes have definitely been one, increasing the number of courses we run from 35 to 51 this semester (so a 45% increase in the number of courses run from one semester to the next). And two, bringing onboard our fantastic 2020 campaign partners and starting to work with them to run training courses and build profile about the great ways they are supporting us and helping to increase the numbers of women working in tech.

Looking at the biggest failure, this was probably when we tried to run a crowdfund campaign as part of the 2020 campaign. We had never run one before, but wanted to see if it would work with our community. Regrettably it didn’t really work with the community and we didn’t reach our fund goal so this didn’t go ahead, but it was a great learning for us on what fundraising channels worked best with what we do.

Are you thinking about internationalization? If yes, which countries would you like to go next and why?

Right now for our free coding courses, we only operate in the UK and Ireland. Especially with the growth of courses related to out 2020 campaign, we will be focusing our community side activities on the campaign in the coming 18 months before thinking about any further expansion, including geographic. We do however work with our partners on global commercial projects. For example, we’re just wrapping up the first year of a fantastic “Code Like a Girl” ‘train the trainer’ programme that we’ve done with Vodafone.

How does it feel to be a female leader on the tech sector? What has been your experiences?

My experiences have been a little different to others working in tech businesses, because I’m constantly surrounded by thousands of amazing women who are wanting to work in tech, and amazing male and female professionals and companies who are supporting them! And as far as my experiences as a leader, I would say really positive, and probably similar to that of any leader of a fast growth business, with all the challenges and rewards that brings, and all the great people and partners who have supported us to do this!

Ana Metz
Ana Metz is the Startup Sourcing Director of EU-Startups. Passionate about how design and technology can influence people and business, Ana is scouting startups and innovative businesses from all over the world, for media, corporates and investors.
RELATED ARTICLES
Acquisitions