A conf that pays for underrepresented people’s flight and accommodation 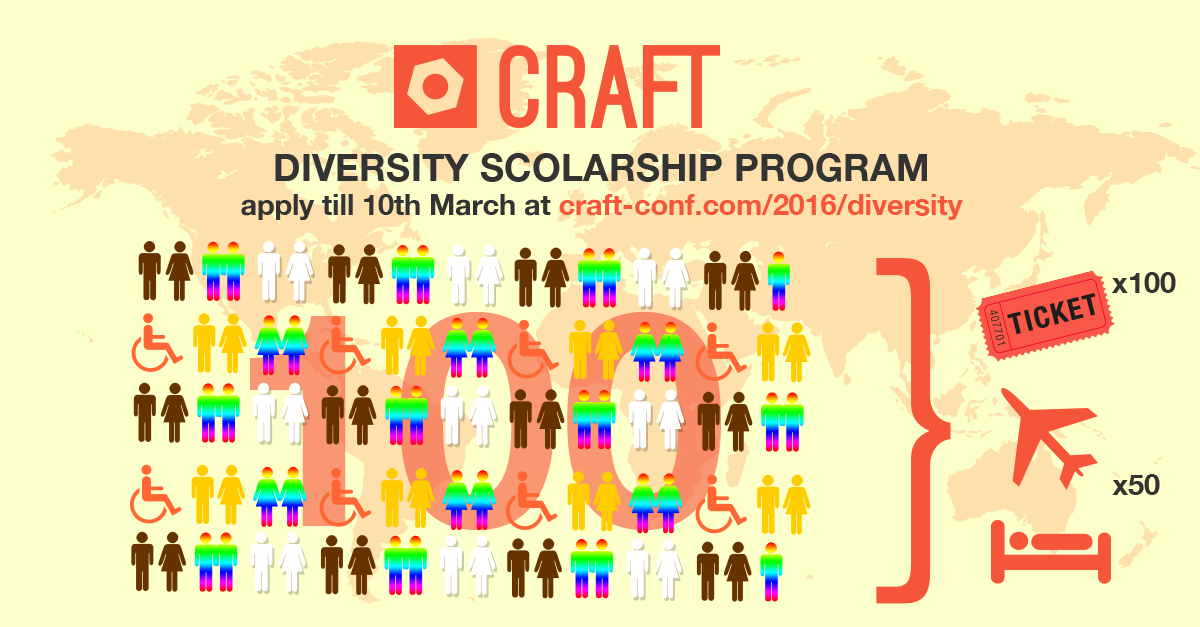 It’s real! Craft, one of the CEE region’s largest technology conferences (1.700 engineers will participate from more than 40 countries), a fully sold-out event, has announced it’s so called “Craft Diversity Scholarship program” that is aiming for bringing diversity to the event.

Conference organizers Ustream, Prezi, and Ericsson have created the diversity scholarship program, which will give 100 underrepresented participants in the IT sector the opportunity to attend for free, with some receiving flight tickets and accommodation, too. The deadline to apply is March 28, 2016.

The conference, which takes place between April 26th and April 29th, is encouraging 100 participants from underrepresented backgrounds (such as women, people with disabilities, people of color, the elderly, low-income) to apply so that they can have a unique chance that would otherwise not be possible.

“The world of programmers includes an unreasonably low percentage of people belonging to any minority groups, while diversity is extremely important in this profession too, since people with different views give different answers to problems. For us, it is very important to have this diversity at Craft, to inspire as many people as possible” said Gergely Hodicska, head of Development at Ustream, the main organizer of the conference.

Of those that are selected to be eligible withineach group, half will receive support from the organizers for their travel costs as well. This means that they will receive flight tickets and accommodation in a value of up to $500USD. This year’s diversity scholarship program is being funded from the money left over from last year’s conference, and the revenues from tickets supporting diversity. This latter is purchased by companies which consider diversity at the workplace important. So far, 33 companies have bought 47 such tickets in total.

About the Craft conference

Since its inception three years ago, Craft has become one of the region’s largest developers’ conference. With 1.700 participants expected this year, it will be the largest Craft conference to date. Craft was started by as a nonprofit conference by Ustream, Prezi and Ericsson to bring the best speakers to Budapest from all around the world, so that engineers from Hungary and the region could have the opportunity to personally listen and learn from these speakers  that they would otherwise not have without having to travel to other European cities.

Budapest’s startup ecosystem at a glance