The Dublin-, London- and Berlin-based Mobile payment startup SumUp recently closed a Series A funding round and has now officially launched its service. The young company secured about $20 million from Shortcut Ventures, b-to-v Partners, Tengelmann Ventures and Klaus Hommels (who was also an early investor in companies like Skype, Facebook and Xing).

Kind of similar with the U.S.-based Square, SumUp provides a free app and card reader which allows users to turn mobile devices into tills capable of processing payments. SumUp’s technology works with MasterCard, Visa and Europay and enables complete payment transactions free of charge to merchants. The European Square competitor takes a 2.75% cut of every transaction made. SumUp, which has just been launched in the UK, Ireland, Germany and Austria, mainly targets small businesses.

SumUp’s CEO Daniel Klein stated: “We have grown to a company of over 100 people, and will be using our subsequent investment by our experienced partners to take SumUp to further regions in the months ahead.”

Since SumUp is not the first European startup adapting the business model of Square (iZettle, Payleven, etc.) you are probably already familiar with the concept. If not, make sure to check out the video below in order to see SumUp in action:

“The traditional way of banking will be a rare event”: Interview with Pomelo Pay... 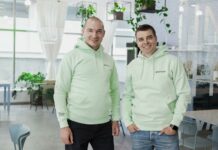