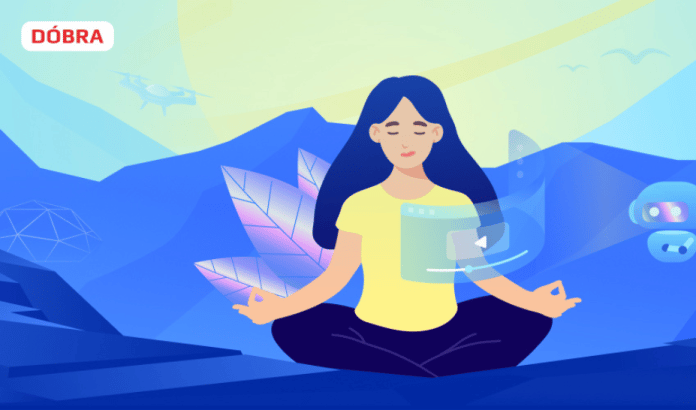 DÓBRA, the first impact venture studio in Lithuania, and one of the first in CEE, has just launched. Combining the models of a niche hackathon and a traditional startup studio, the aim is to connect startups innovating in the same sector to enrich one another and leave a lasting impact.

Since 2013, DÓBRA has sifted through over 4,500 ideas and has been directly involved with or a leading partner in 440 impact-driven startups and projects. Now, the team is wanting to go one step further and has developed a pioneering impact venture studio to cultivate a community-based approach to tackling societal challenges – one where startups enrich one another rather than simply compete. The first issue being tackled by the venture studio is mental health, a challenge with alarming statistics.

Being inspired by the mind-blowing projects of Bell Labs in the 1960s and the scalability of XPRIZE activities, DÓBRA comprises two stages: DÓBRA Grand Prix — a series of world-collaborative events for inventing new concept solutions, and DÓBRA Studio — a venture builder working with brand-new teams which are formed after the Grand Prix.

Combining the models of a niche hackathon and a traditional startup studio, the DÓBRA Studio will focus on batches that address a narrow range of topics and will be launched up to 2–3 times per year.

Aljaxandr Skrabowsky, DÓBRA Founder, has joined forces with experienced business lawyer Darya Zhuk, who has 15 years of experience in M&A, corporate advisory & Government in the Baltic States and Scandinavia, and Denis Dybsky, founder of InsightHack, a market research automation company, and former co-founder of Teslasuit, a smart clothing company.

Positive experience and joint projects with global corporations, worldwide non-profit institutions, and high-net-worth individuals are encouraging the team to go further. This gives the team the boost they need to be successful.

Aljaxandr Skrabowsky: “When defining the mission and philosophy of the studio, we decided to be a supplier of properly structured early-stage companies that have primary traction and validation within the framework of the studio’s focus topics.”

All startup teams will be addressing the same problem, but each in their own unique way. This means they will have a chance to enrich each other and even swap team members, which creates the internal magic of startup survival.

Typically, studios give a startup 25–30% of the company’s shares, but DÓBRA wants to do things differently. Participants who are part of the core team will be able to get up to 40% of the startup’s shares through the studio. This will give them significant shareholder rights until Series A.

The Studio will also take a unique approach to investor relations. Instead of raising funds for the studio, they will gather limited partners interested in investing in a specific bunch. This lets investors invest in all of the early-stage startups at the same time on a pro-rata basis, which lowers the risk.

To generate ideas, DÓBRA will hold a Grand Prix — a series of world-collaborative events that will be held from the 2nd to the 19th of March online and offline with hundreds of cross-topic and domain experts. These are not only entrepreneurially inclined people, but don’t underestimate them. The results are concept solutions and brand-new teams with whom DÓBRA will be engaged in prototyping and developing over the next 2-3 months.

One more difference between DÓBRA Grand Prix and other hackathons is that participants can receive cash rewards for the insights that underlie the concepts. 10% of future startups’ valuation is reserved for such activity. So specialists would be able to receive a tribute for their talent and knowledge.

The studio’s first issue to tackle is mental health, due to the large market and alarming statistics. WHO reports that 1 in every 8 people in the world (about 970 million people in 2019) lives with a mental disorder. 1 in 4 people will experience a mental health disorder in their lifetime. About 81% of the people in the world have dealt with these problems in the past two years. DÓBRA’s goal is to generate solutions from multiple disciplines to address this issue.

Find out more about the Studio, and learn how to get involved here.