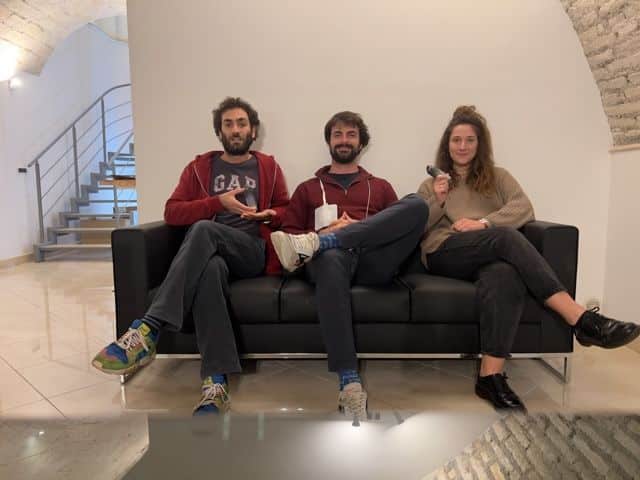 EIT Health InnoStars Awards is one of the main EIT Health accelerator programmes for early-stage healthcare startups from Central, Eastern or Southern Europe. This year, the final event saw 10 selected teams from over 100 applicants compete to take home the prestigious prize, and the recognition as a visionary venture with the potential to shape the future of healthcare. We chatted with the winners to hear their thoughts.

Innovation in healthcare is something which impacts each and every one of us. From solutions helping to relieve pressure on healthcare systems and innovations empowering greater autonomy over personal health to new medical devices and beyond, healthtech is a very exciting space in Europe’s startup ecosystem right now.

Now in its 6th year, EIT Health InnoStars Awards is an accelerator programme supporting game-changing innovators and entrepreneurs in the healthtech space.

This year, taking home the third place prize was Medicud!

The device, which is portable, wearable and easy to use, aims to be used to prevent postoperative infections as well as chronic wounds. We chatted with Founder and CEO, Antonio D’Angelo, to learn more.

Can you tell us about Medicud? What are your aims, values, and vision?

Medicud aims to disrupt the medical device market, by providing sustainable medical technologies, company values are common between engineers and millennials, producing worthwhile medical technologies and making them available to the vast majority of users, combining gold standard and efficiency. At Medicud, we are obsessed with patient care, all we do should be guided by optimizing the welfare of all patients. Medicud’s vision is clear, better healing for everyone.

What inspired the company?

I was inspired after chatting with my father, a Surgeon in Rome, Italy, who complained that a high-risk patient who he had operated on earlier that day was unable to avail of the proven benefits of Incisional Negative Pressure Wound Therapy (I-NPWT) due to the very high cost of the therapy system. This high-risk patient, a 75-year-old female who underwent bowel surgery, would have benefitted from NPWT to ensure her surgical incision remained closed. The opening up of a surgical incision can potentially lead to serious post-op complications, including infection, which requires long and costly stays in the hospital. There, the idea to change this situation was born!

What challenges have you faced along the way so far as a startup founder?

Let’s say that apart from common challenges, Medicud faced several sector-specific challenges such as building a 100% hardware product in a form of a medical device is not what investors like. A long-term scenario is foreseen before the first sales and break even, due to the extensive testing phase and necessary certification. The fact that fully functional prototypes have to be manufactured in a special setting with tailored machines and materials let us face the industrial reality really soon, where timing is not optimal and costs are really high. But this was seen as an opportunity to start thinking of industrial production and assembly really in the initial stage of product development. Unfortunately, sometimes this is frustrating as you are not in total control of the process and delays and problems happen!

What attracted you to the EIT Health InnoStars Awards programme?

EIT Health InnoStars Awards was the natural follow-up of the program started last year with EIT Health Medtech Bootcamp. The possibility to share insight with industry experts and see what other startups in the same industry are doing is really enlightening. More than this, the prestige of being selected among the top health startups in Central, Eastern and Southern Europe is a key factor and let’s be honest, economically speaking the prizes were appealing.

What is the benefit of taking part in an accelerator programme like InnoStars Awards?

The benefits we got from EIT Health InnoStars Awards were mainly mentoring with industry experts whether it was about pricing and health economics or regarding more general topics such as pitching and strategy. I really found the part hosted by Syreon Research Institute useful. And obviously, the economic support, other than that, the prize, permitted us to bridge in a tough month due to bureaucratic reasons, we were running out of money and new funds were on hold until the notary operation closed.

Can you tell us about your experience?

What are your growth plans?

We will have the final prototype, which is in fact the definitive version, completed and fully industrialized by the end of Q1 2023, and then the clinical validation and the subsequent compulsory certification for a class II medical device will start. Medicud’s goal is to enter the market by the end of 2024. To reach this ambitious but realistic target a significant headcount increase will happen in the next months. Starting with an experienced Regulatory Affairs Specialist and followed by a senior sales director, to build and structure a sales team and execute the plan.

And how will being part of the EIT Community support you?

Being part of the EIT Community first of all reflects that we are one of the top health startups in Europe, then with the mentoring platform, we can reach out for interesting insights from experts around all of Europe. We have been also awarded by the National Academy of Medicine as one of the Catalyst innovators at this year’s summit, it’s an important first step to entering the USA.

How do you plan to leverage the network and the funding granted to you?

The initial funding has been used to expand via PCT three patents, the EPO search report came completely positive, therefore it was an obliged choice. But we were in a difficult moment economically speaking, the round was virtually closed but money wasn’t yet on our account, a stupid bureaucratic step was missing and in August Italy shuts down for holidays. The third place prize will then be used for a branding and marketing campaign, with a beautiful website soon online.

What would be your advice to startups who might consider applying next year?

Do it for sure! You’ll learn a lot of interesting and useful things. And you will meet incredible mentors such as Jorge Pimenta and eventually among all the fairs and events I’ll find one of the fellow startups to share a chat and a beer.

Editor’s Note: This post has been created in collaboration and with financial support from EIT Health. If you’re also interested in partnering with us, just reach out.

EIT Health is one of the biggest European public-private partnerships in the field of healthcare innovation. Comprised of approximately 150 Partners, EIT Health is a unique European network of top companies, universities, research and development centres, as well as hospitals and institutes. EIT Health’s role is to build an ecosystem that enables the development of healthcare for the future so that European citizens can live longer and healthier lives.